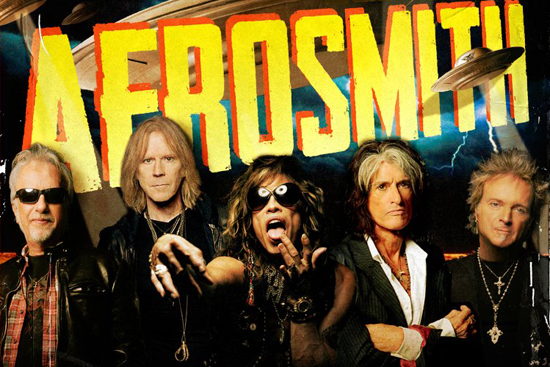 Legendary rock-and-roll band Aerosmith will perform a free outdoor concert today at noon in front of the apartment building they used to live in at 1325 Comm Ave, according to information the band released during a Friday appearance on NBC’s Today show and several news sources.

The 30-minute concert comes on the eve of the release of the band’s 15th album, Music from Another Dimension. Band members will perform outside the building where they lived during the early 1970s. They recorded some of their earliest hits there, including “Dream On,” “One Way Street,” “Movin’ Out,” and “Somebody.” Lead singer Steven Tyler, guitarists Joe Perry and Brad Whitford, bass player Tom Hamilton, and drummer Joey Kramer plan to leave their handprints in fresh cement in the sidewalk in front of the building, according to radio station WAAF 87.7/107.3, which is helping to coordinate the event. The band members will also dedicate a plaque in their honor at the building, according to yesterday’s Boston Globe. The concert, being billed as a “preelection day celebration,” is designed to get people to vote the following day.

Because of the crowds anticipated, the MBTA will suspend Green Line B trolley service between Washington Street and Packards Corner from 10:30 a.m. to 3 p.m. today. The MBTA is urging Brighton travelers to use Green Line C trolleys or Route 57 buses to and from Kenmore Square, according to spokesperson Joe Pesaturo. If traffic conditions allow, he says, the MBTA will operate limited bus shuttle service between the Washington Street stop on the B Line and the Washington Square stop on the C Line.

Boston police will close Commonwealth Avenue between Harvard Avenue and Allston Street from 7 a.m. to 3 p.m. and divert all traffic down side streets, according to Captain Robert Molloy of the Boston University Police Department. There is no parking posted in that area for the event, and the Boston Transportation Department will begin towing there early today, he says. Visitors will be allowed in shortly before the concert.

Aerosmith, the best-selling rock and roll band of all time, has been together 42 years. In anticipation of Music from Another Dimension (their first album with new music in more than a decade), the band appeared on several daytime shows Friday, including the Today Show and The View, and performed during NBC’s Hurricane Sandy Coming Together benefit concert that night. Aerosmith’s Global Warming Tour kicks off in Oklahoma City on Thursday, November 8, at the Chesapeake Energy Arena.

There are 3 comments on Amazing! Free Aerosmith Concert Today in Allston