This year marks the 150th anniversary of the start of the Civil War, and the Boston Public Library is marking the occasion with four exhibitions that draw on its superb collection of maps, photographs, drawings, correspondence, and artifacts.

Torn in Two: The 150th Anniversary of the Civil War

This exhibition’s displays, located in the changing exhibits room on the library’s ground floor, showcase 50 historic maps and include paintings, prints, diaries, and political cartoons emphasizing the central role of geography in the causes leading up to the Civil War and in the war’s consequences. The exhibition is divided into three sections: “Rising Tensions,” which looks at the economic and political differences between the North and the South that led to the war; “Nation in Conflict,” which focuses on the war itself; and “Remembering Battles and Heroes,” which reveals the country’s efforts to commemorate key battles and honor the lives lost during the war. 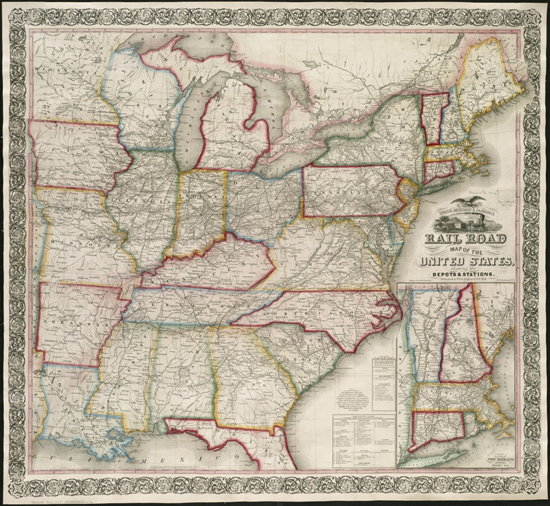 Torn in Two reminds visitors that the underlying causes of the war had been brewing for decades prior to the Confederate firing on Fort Sumter in April 1861. It’s striking to note that prior to the war, large-scale topographical maps of the nation were almost nonexistent, leaving military strategists—especially those from the North—at a disadvantage. The war would change that, as maps were drawn in the aftermath of significant battles. Several maps in this exhibition remind visitors of Boston’s key role in providing arms and training Union soldiers. Lithographs and engravings depict workers at the Watertown Arsenal filling cartridges with powder and bullets, and a daguerreotype depicts a group of Roxbury women preparing kits for the first soldiers from the city to fight in the war. 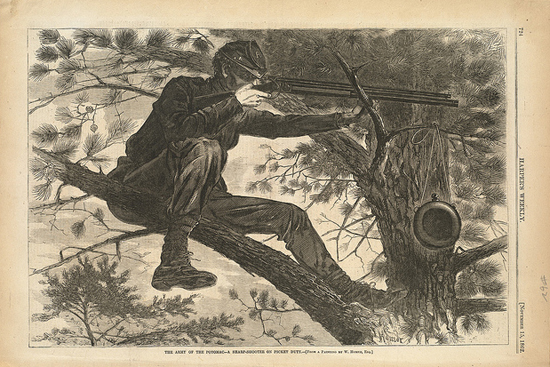 The Army of the Potomac: A Sharpshooter on Picket Duty by Winslow Homer. Published in Harper’s Weekly, Volume VI, 15 November 1862, p. 724.

Born in Boston in 1836, Winslow Homer began his career as a freelance lithographer before becoming famous as a painter of seascapes and nostalgic scenes of everyday life. Homer’s work as an illustrator, most notably for Harper’s Weekly, took him to the front lines of the Civil War. On display here are some of his most unforgettable depictions from the war and the years following, part of the BPL’s collection of 150 illustrations by the artist. Many depict day-to-day life inside the Union camps, such as soldiers playing football or lining up to be paid. Other engravings, like The War for the Union: A Cavalry Charge and The Army of the Potomac: A Sharpshooter on Picket Duty, capture the war’s carnage and savagery.

In the aftermath of the Civil War, Americans became nostalgic for a simpler time, a trend evident in many of Homer’s engravings from the late 1860s and 1870s. The Nooning (1873) depicts three boys lying in the grass behind a farmhouse, a harkening back to childhood. And The Last Days of Harvest (1873) captures a similar idyllic moment—two boys shucking the last of the season’s corn. 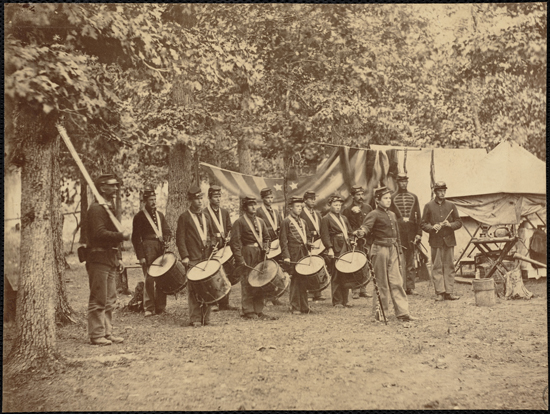 Photo by Brady: The Civil War through the Lens of Mathew Brady

Much of what we know about the Civil War comes from the pictorial archive amassed by pioneering photographer Mathew Brady and his colleagues. In 1861, photography was still in its infancy. Brady was given permission by President Abraham Lincoln himself to photograph the war from the battlefield, and he quickly amassed a team of 35 photographers. Over the next four years, the Mathew Brady Studio took thousands of photographs documenting Union troops as they fought battle after battle.

This exhibition draws from the BPL’s collection of nearly 375 Civil War photographs taken by Brady, his colleague Alexander Gardner, and members of the Brady Studio. Many of the images here are unforgettable: a pensive General Ulysses S. Grant taken just a month after the war’s end; Union army hospitals filled with amputees; and perhaps most memorable, a photo titled Collecting the Remains of the Dead, Cold Harbor, which shows the corpses of Union soldiers being dug up for permanent burial months after the 1864 battle of Cold Harbor. It is a shocking image, skulls lined up on a stretcher, the field full of decomposing limbs.

This exhibition looks at the Civil War through the eyes of 10 Bostonians—men and women—who played a crucial role in shaping social reforms during and after the war. Drawing on manuscripts, rare books, prints, and artifacts from the library’s special collections, it examines the war’s impact on Boston and its citizens’ impact on the war. Among them are leading abolitionist William Lloyd Garrison, whose newspaper, The Liberator, called for the end of slavery; African American orator and abolitionist Charles Lenox Remond, who recruited black soldiers to serve in the 54th Massachusetts Volunteer Infantry, led by Col. Robert Gould Shaw; early women’s rights activist Julia Ward Howe, author of The Battle Hymn of the Republic; Louisa May Alcott, best known as the author of Little Women, but who also was an army nurse; and human rights advocate and reformer Dorothea Dix, who served as superintendent of Army Nurses for the Union Army throughout the war.

There is 1 comment on The Civil War 150 Years Later