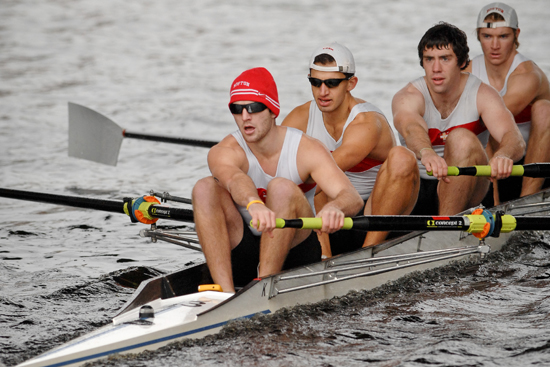 This weekend’s Head of the Charles is the largest two-day rowing event in the world. Both the men’s and women’s teams will compete. Photo by Victor Bieger

Nearly 2,000 boats and 9,000 rowers will take to the Charles River this weekend for the 47th annual Head of the Charles regatta, beginning tomorrow.

The Boston University men’s crew and women’s rowing programs will claim seven of the boats competing. And both programs enjoy a distinct advantage over most of the other rowers from around the country and around the globe: they’ll be racing on the course they practice on every week.

“The Head of the Charles is a coxswain’s course because there are so many turns in it,” says Kayla Rivers (CAS’12), a coxswain on the women’s championship eight boat. “So to be able to row it every day, and know what works and what doesn’t work, is really advantageous. You can get out there on race day and it’s like a practice day. You just have to row the course you know.”

The largest two-day rowing event in the world, the regatta kicks off at BU’s DeWolfe Boathouse, and members of both teams say they’re excited to be part of one of the most prominent events the sport has to offer.

More than 300,000 spectators are expected to line the shores of the Charles to watch 61 races over the two days. Men’s head coach and former Olympian Tom Bohrer says that having such a famous race begin at BU’s boathouse gives the school’s rowing programs great visibility during the regatta.

“Everyone knows the start is at the BU boathouse,” says Bohrer. “It’s a good way to showcase the program, and we also get a lot of alumni and parents to come back, so it’s good stuff.”

The Head of the Charles gives the men’s and women’s programs more than just publicity. They get a serious a test of their endurance. While most collegiate races span about 2,000 meters, the Terriers will row nearly 5,000 meters this weekend.

The event allows the men’s crew and women’s rowing teams to measure their strengths and weaknesses as they prepare for the main collegiate season in the spring. The Head of the Charles is one of just three races the men’s team will compete in this fall, and one of four events scheduled for the women’s team.

“We’ve been steadily getting better throughout the season, which is encouraging and should be happening, but it’s nice to see the results so that the rowers know what times to shoot for,” says Stacey Rippetoe, head coach of the women’s rowing team. “I think that’s a good healthy goal for a race as big as the Head of the Charles, where there are so many competitors and so many different factors.”

Bohrer cautions against using the results as an indicator of the team’s in-season performance.

“I look at the race as something to just measure our own progress against where I think we should be,” he says. “It gives us something to concentrate on and get information out of. You take the result you want of out of it, because there are a lot of variables in the race. Certainly how you do in the Head of the Charles doesn’t predict what’s going to happen in the spring.”

While their real season doesn’t begin for several months, the Terriers are already immersed in a rigorous practice schedule. Both teams practice 20 hours a week, and rowers are often out on the water when most college students are still asleep.

“You get into a routine, and it’s something that gets your day going,” says Andrew Reswow (CAS’12), who rows for the men’s championship eight boat. “Everybody’s complaining about having to wake up at 8 a.m., and you got here at 6:30. You feel really accomplished going into your day.”

“It’s strenuous, but it’s really rewarding to be able to see your progress after all that work, and it really pays off,” says Lynn Ratte (SAR’14), a member of the women’s championship eight boat. “Our goal is to go hard and get the best results we possibly can for the team.”