Not traveling for spring break? Fear not. Beginning tonight, there’ll be plenty for you to do on campus in what is arguably the biggest on-campus weekend in BU athletics history.

The action kicks off this evening when the men’s ice hockey team takes on crosstown rival Northeastern in the Hockey East quarterfinal series at Agganis Arena. Game two of the best-of-three series begins at 7 p.m.

Tomorrow, both the men’s and the women’s basketball teams play on home court for America East titles and trips to the NCAA tournament. In between those championship games, the women’s ice hockey team hosts an NCAA game as a participant for the first time in its six-year history, facing off against Mercyhurst College in the quarterfinals at Walter Brown Arena.

“I don’t say this lightly, because we’ve won national championships—most recently in 2009,” says Michael Lynch, director of athletics. “Aside from that crescendo moment for the men’s hockey team, this could end up being one of the biggest days in the history of our program. When you look at it across the board, I don’t think there’s ever been another day like this.”

Tomorrow’s marathon begins at noon, when the men’s basketball team hosts the Stony Brook Seawolves at Agganis Arena in a contest being broadcast live on ESPN2. The Terriers, who enter the tournament as the number-two seed, will be aiming for their first trip to the NCAA tournament since 2002. The fifth-seeded Seawolves upset top-seeded Vermont in the first semifinal game March 7 in Hartford, and the host Hawks, seeded sixth, fell to the Terriers, 55-49, who advanced to the title game. 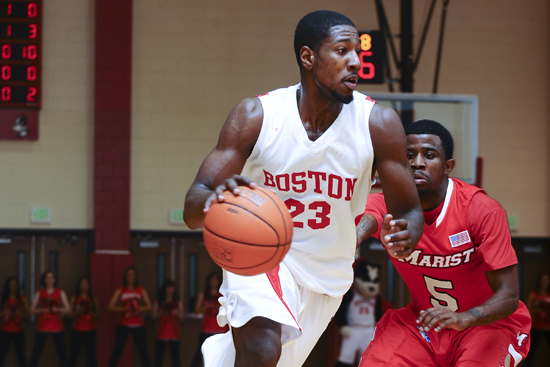 The women’s basketball team reached the America East title game for the seventh time in the past nine seasons last Sunday thanks in large part to a 37-point performance by Alex Young (COM’12) that sparked a Terriers defeat of the Binghamton Bearcats, 59-44. Like their male counterparts, the women are the number-two seed in the tournament. Looking for their first league crown since 2003, the Terriers face rival Hartford in tomorrow’s championship game at 7 p.m. at Case Gym. Comcast SportsNet will cover the game live.

As if all that hoops action weren’t enough for Terriers fans, the women’s ice hockey team will be aiming for its first-ever trip to the Frozen Four when it hosts the Mercyhurst Lakers tomorrow at 3 p.m. BU, seeded third in the NCAA tournament, meets the Lakers in the quarterfinals for the second straight year. The Terriers fell to Mercyhurst last year in their inaugural NCAA appearance.

The men’s ice hockey team’s best of three Hockey East quarterfinal series against the Northeastern Huskies began last night, with a 4-2 win by Northeastern. Game two is tonight at 7 p.m. The series will resume on Sunday, March 13, at 7 p.m., if a third game is needed; all games are at Agganis Arena. The Terriers hope this weekend extends their Hockey East record of nine straight trips to the league semifinals, which take place next Friday, March 18, at TD Garden.

“When you think that the women’s ice hockey team is going to play host in the first round of the NCAAs, and both of our basketball teams have a chance to get into the NCAA tournament—all on the same day,” says Lynch, “that’s absolutely unprecedented. And they’re all winnable games.”

The men’s basketball American East title game against the Stony Brook Seawolves is tomorrow, Saturday, March 12, at noon at Agganis Area, 925 Comm Ave. Tickets are free for students with a valid Sports Pass, $3 without, and $15 for faculty and staff.

The women’s basketball America East title game against the Hartford Hawks is tomorrow, Saturday, March 12, at 7 p.m. at Case Gym, 285 Babcock St. Tickets are free for students with a valid Sports Pass, $3 without, and $15 for faculty and staff.

The women’s ice hockey NCAA contest against the Mercyhurst Lakers is tomorrow, Saturday, March 12, at 3 p.m. at Walter Brown Arena, 285 Babcock St. Tickets are $3 for students with a valid BU ID, $5 for faculty and staff.

A special package for all three of Saturday’s events is available to the faculty and staff for $25 and the general public for $40. This exclusive deal can be purchased online or by calling 617-353-GOBU.

There are 2 comments on Terrier Nation: March Madness Comes to Comm Ave