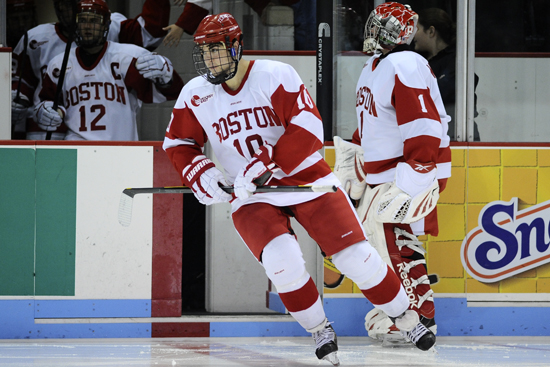 Corey Trivino (MET’12) (left), the leading scorer in Hockey East, is no longer on the BU hockey team. Photo by Steve McLaughlin.

The starting center on the BU men’s ice hockey team was arrested Sunday night and charged with three counts of indecent assault and battery after he allegedly entered the room of a female student and attempted to kiss and grope her.

Corey Trivino (MET’12), the leading scorer in Hockey East, was also charged with two counts of breaking and entering in the nighttime and one count of assault with attempt to rape. Trivino, a Toronto native, pleaded not guilty to all charges at his arraignment yesterday in Brighton District Court. Judge David T. Donnelly set bail at $25,000 or surrender of Trivino’s Canadian passport and ordered Trivino to leave his BU dormitory room by 3 p.m. yesterday. Donnelly ordered a “status check” of the case on January 18.

Suffolk County Assistant District Attorney Cameron Merrill told the court that witnesses claim that an apparently intoxicated Trivino pushed his way into the room of a female student at 10 Buick St. and started kissing her and fondling her against her will. Trivino reportedly left the room at the student’s insistence, and she called the Boston University Police at about 11 p.m. Police arrived a short time later and placed Trivino under arrest.

Trivino, whose family flew in for his arraignment, appeared in court in handcuffs and a powder blue hoodie. He never spoke, standing hunched forward and head down throughout the court proceeding.

Head hockey coach Jack Parker says Trivino has been permanently removed from the team. “He is no longer associated with the BU hockey team,” says Parker (SMG’68, Hon.’97).

Parker says the first line center, who was drafted by the New York Islanders in 2008, may have been the team’s most valuable player.

“This will be a big hole to fill,” says Parker. “And there’s an emotional hole also.”

Dean of Students Kenneth Elmore says Trivino, who may attend classes until he is officially suspended or expelled, would be brought before Judicial Affairs and “the matter would be investigated as swiftly and thoroughly as possible.”

“We appreciate that the judge in this case takes the matter seriously,” says Elmore (SED’87). “He used his process and we will use ours as fast and as thoughtfully as we can to carefully listen to all the charges and make sure that no one is harmed.”

Elmore says the University works with victims of all crimes to find counseling and other services to guarantee their safety and welfare.

BUPD Chief of Police Thomas Robbins says that in the case of “stay away orders,” police officers oversee the collection of personal effects. “If we notice that anyone is violating such a court order, we take immediate and appropriate action,” says Robbins.

There are 109 comments on BU Men’s Hockey Star Arrested