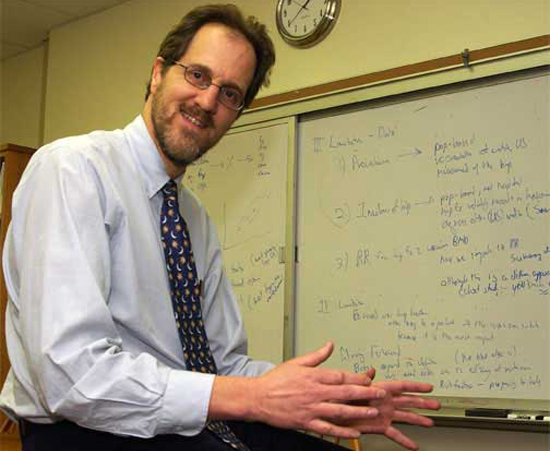 “The biggest problem is that overdiagnosis triggers overtreatment, and all of our treatments carry some harm,” says H. Gilbert Welch, this year’s William J. Bicknell Lecturer in Public Health. Photo courtesy of Dartmouth College

After the criteria used to define osteoporosis were expanded in 2003, seven million American women were turned into patients virtually overnight. Diagnoses of high blood pressure, diabetes, and cancer also have skyrocketed over the past few decades—yet the number of deaths from those diseases has been largely unaffected.

While conventional wisdom holds that early diagnosis is good, H. Gilbert Welch, a professor of medicine and director of the Center for Medicine and the Media at the Dartmouth Institute for Health Policy and Clinical Practice, views it as a major problem for modern medicine, with myriad social, medical, and economic implications. In his new book, Overdiagnosed: Making People Sick in the Pursuit of Health (Beacon Press, 2011), Welch and coauthors Lisa Schwartz and Steven Woloshin write about the hazards of looking too hard for illnesses in healthy people, including additional procedures that carry no benefit, but may cause harm, higher health care costs, and psychological detriments.

Welch will elaborate on the downside of the growing penchant for early diagnosis this Friday, October 28, when he delivers the 2011 William J. Bicknell Lectureship in Public Health at the BU School of Public Health. He has been a practicing physician for 25 years, during which time he has posed some hard questions about his own profession.

Welch’s talk, titled Making People Sick in the Pursuit of Health, comes just weeks after a government panel recommended that healthy men should no longer have a standard PSA blood test to screen for prostate cancer, because the test does not save lives overall and often leads to treatments that needlessly cause pain, impotence, and incontinence in many.

“The biggest problem is that overdiagnosis triggers overtreatment, and all of our treatments carry some harm,” says Welch.

In a study published this week in the Archives of Internal Medicine, Welch and Dartmouth researcher Brittney A. Frankel concluded that most women with mammogram-detected breast cancer had not “had their lives saved” by screening. While Welch noted that some women clearly are helped by mammography screening, their analysis found that the lifesaving value of the test was questionable. Among the 60 percent of women with breast cancer whose disease was detected by screening, only about 3 percent to 13 percent were actually helped by the test, according to the study.

The Bicknell lecture is followed by a panel discussion with Deborah Bowen, an SPH professor and chair of the department of community health sciences; John Fallon, senior vice president and chief physician executive of Blue Cross Blue Shield of Massachusetts; and Kenneth W. Lin, a Georgetown University School of Medicine assistant professor of clinical family medicine.

BU Today recently spoke with Welch about the medical practices that give him pause.

BU Today: What is overdiagnosis?

Welch: Let me start by saying I’m a conventionally trained physician. I teach, do research, and see patients. I believe American medicine can be very beneficial for sick patients. My concern is about what we are doing to people who are well.

Overdiagnosis occurs when we doctors make diagnoses in individuals who are not destined to ever develop symptoms—or die—from the condition diagnosed. It’s a side effect of our relentless desire to find disease early through annual checkups and screening.

What’s the problem with wanting to know if there’s a cancer or disease lurking in our bodies?

The problem is, we all harbor abnormalities, and our tests are increasingly able to find them, yet most of these abnormalities will not go on to cause disease. But because clinicians don’t know which will and which will not, we tend to treat everybody. That means we are treating those who cannot benefit because there’s nothing to fix, and these people can be harmed.

Well, simply being given a needless diagnosis can adversely affect your health. The truth is that health is more than a physical state of being; it’s also a state of mind. It’s hard to feel well when we doctors are constantly saying something is wrong.

But the biggest problem is that overdiagnosis triggers overtreatment, and all of our treatments carry some harm. These range from the headaches of renewing prescriptions and scheduling appointments and keeping them to the physical harms of drug side effects, surgical complications, and even death.

Can you give an example of testing that leads to overdiagnosis and overtreatment?

The poster child for the problem is prostate cancer screening: 20 years ago, a “simple blood test” was introduced; 20 years later, over one million Americans had been treated for a cancer that was never going to bother them. The test was the PSA. It’s able to detect minute quantities of prostate-specific antigen—minute as in one-billionth of a gram. Turned out a lot of men had “abnormal” PSAs. Many were found to have microscopic cancers—far more than would ever suffer from prostate cancer. So they were overdiagnosed.

Does it matter? Absolutely. Most were treated with either radical surgery or radiation. Roughly a third suffered side effects of treatment—generally related to bowel, bladder, or sexual function. And a few have died from it.

You’ve talked about health conditions defined by numbers, or benchmarks—like high blood pressure, high cholesterol, diabetes, and osteoporosis—numbers that distinguish between who’s healthy and who’s sick. Aren’t those numbers based on sound science?

Yes—and no. Yes, in that we know these conditions can be important and that treatment can help—i.e., treating really high blood pressure is one of the most important things we doctors do. But no, in that the “rule” by which health conditions are gauged—the number which, if you are on one side of it, you are well, but if you are on the other side of it, you are sick—has been regularly changing. For example, a fasting blood sugar of 130 was not considered to be diabetes before 1997, but now it is. And these numbers are always changing in one direction: the direction of labeling more and more people as abnormal.

The problem is that these newly created patients stand to benefit the least from intervention. Yet they face roughly the same amount of harm from intervention. In other words, the net effect of intervention may be harm. For example, as we recently learned in diabetes, while trying to move people with mildly elevated blood sugars towards “normal,” the death rate increased.

We believe this is what our patients, and the public, care about. But it’s time for everyone to start caring about what happens to the other 999.

Who benefits from overdiagnosis?

Why has there been so much emphasis on screening? Do you think it’s been driven by what the public wants—early warnings—or what the medical profession has imposed?

The simplest explanation is that the medical and public health communities have systematically exaggerated the benefits of early detection and downplayed (or ignored entirely) its harms.

Finally, there is the particularly misleading influence of survivor stories. I hate to say this, but the truth is that most screen-detected breast and prostate cancer “survivors” are, in fact, more likely to have been overdiagnosed than truly helped by early detection. Ironically, the more overdiagnosis a screening test causes, the more people who feel they “owe their life to the test,” the more likely the rest of us are to have heard their stories—and the more popular screening becomes.

Would you advise patients who are offered testing for various conditions, based on family history or other indicators, to refuse the tests?

No. Instead, I want them to understand that there are real choices here. The decision about whether or not to look for something to be wrong is not a “no-brainer.” They should understand the two sides to early detection: while it may help you, it may also hurt you.

Overdiagnosis: Bad for You, Good for Business

There are 14 comments on Overdiagnosis: Bad for You, Good for Business

Overdiagnosis: Bad for You, Good for Business
14
share this