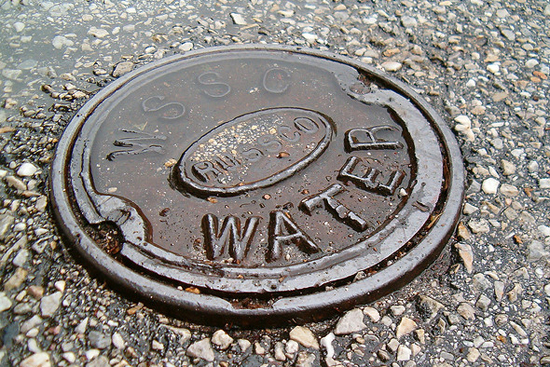 Underground vinyl-lined water pipes were the source of tetrachloroethylene, which a recent SPH study has linked to increased drug use and other risky behaviors among young adults exposed to the chemical as babies. Photo by Blake Emrys

From the late 1960s to 1980, an estimated 600 miles of water pipes contaminated with a known neurotoxin were installed in nearly 100 cities and towns in Massachusetts.

According to a new study by researchers at the BU School of Public Health examining Cape Cod residents exposed to the neurotoxin PCE, children in contact with contaminated drinking water before birth and as infants and toddlers are more likely to use illegal drugs later in life.

The study, published online in Environmental Health earlier this month, is the first to examine associations between prenatal and early childhood exposure to PCE (tetrachloroethylene, also commonly called perchlorethylene or perc) and the development of risky behaviors—including smoking, drinking and drug use—in teenagers and adults. PCE was used in the vinyl liner of drinking water pipes for several years. Those pipes no longer leach the chemical, but it is still widely used in dry cleaning and metal degreasing solutions.

PCE is a common drinking water contaminant found throughout the country, including in parts of California and Pennsylvania and at Camp Lejeune, a Marine Corps base in North Carolina.

The SPH team, headed by Ann Aschengrau, a professor of epidemiology, has previously examined associations between PCE exposure and cancer, as well as reproductive and developmental outcomes. The prior studies showed increases in the risks of breast cancer and certain birth defects.

The new findings “present one more reason why we need to keep harmful chemicals like PCE out of our drinking water,” says Aschengrau.

The study found that the risk of using two or more illegal drugs as teenagers or adults for people with high exposure levels during gestation and early childhood was increased 1.5- to 1.6-fold. Increases in the use of cocaine, hallucinogens, club drugs, and Ritalin without a prescription were observed. Among highly exposed people, 30 percent to 60 percent increases in the risk of certain smoking and drinking behaviors also were seen. Previous studies have shown that chronic or high exposure to PCE among adults can have adverse effects on cognition, behavior, and mood.

In 1980, government officials in New England learned that PCE was leaching into public drinking water supplies from the vinyl lining of asbestos cement water-distribution pipes. The liner, which had been used since the late 1960s to address alkalinity problems, had been sprayed onto the inner pipe surface.

Surveys done after the discovery of contamination estimated the high number of such water pipes in the Bay State. Exposure to PCE from drinking water occurs by direct ingestion, exposure through the skin during bathing, and inhalation during showering, bathing, and other household uses.

The study subjects were born between 1969 and 1983 to married women living in Cape Cod towns known to have some vinyl-lined water pipes in their water distribution system. Eight towns in the study area were affected: Barnstable, Bourne, Falmouth, Mashpee, Sandwich, Brewster, Chatham, and Provincetown, each having from one to 50 miles of the vinyl-lined pipes.

PCE is a well-recognized animal and human neurotoxicant. Many epidemiologic studies of adults with occupational exposure to PCE and other solvents have reported impairments in cognition, memory, and attention. Mood changes, including increases in anxiety and depression, also have been reported.

The published literature examining neurotoxic effects among children exposed to organic solvents, including PCE, is relatively small, and the findings inconsistent. Four studies have found no deficits in cognitive and behavioral function and no increases in attention and learning disorders; two have found lower tests scores and more behavioral problems among children with prenatal or early childhood exposure. None of the prior studies examined possible long-lasting neurological consequences of early life exposure.

Aschengrau and her coauthors caution that because this study is the first to report the association between PCE exposure and risky behaviors, and because of other limitations, the findings “should be confirmed in follow-up investigations of similarly exposed populations.”

They also say that because PCE remains a commonly used commercial solvent that “exposes workers and consumers and causes frequent contamination of drinking water … it is important to determine its long-term impact on behavior.”

Other SPH researchers participating in the study include Michael R. Winter and Brett R. Martin, of the Data Coordinating Center, and Megan E. Romano (SPH’07) and Lisa G. Gallagher, of the University of Washington.

The study was funded by the National Institute of Environmental Health Sciences Superfund Research Program.

There are 6 comments on Link Found Between Contaminated Water, Risky Behavior