It all started as an innocent tiff around the water cooler.

Last semester, Hila Landesman posted a sign on the Vermont Pure Natural Spring Water container in the College of Arts & Sciences geography and environment department’s student lounge, saying, “This is bottled water too.” Someone surreptitiously tore it down. But the sign reemerged this semester, this time penned by someone else. A rebuttal was then taped to the cooler noting that heavy metals found in tap water make it unsafe to drink.

The silent water war was getting to Landesman (CAS’12).

“We are the environmental department, yet we have this big container of bottled water sitting there,” she says. The plastic bottles are made from petroleum, shipped long distances, and if not recycled, take years to break down in a landfill—all reasons she thinks her department should boycott them. “There’s a water fountain around the corner from the student lounge. It’s literally seven steps away.”

Landesman shared her concerns with Nathan Phillips, a CAS associate professor of geography and environment, and they decided to end the back-and-forth with a bottled water versus tap water taste test on March 22 in honor of World Water Day.

Weeks before the event, Landesman collected samples of tap water (taken from the George Sherman Union, the FitRec Center, and water fountains in CAS) and bottled water (Aquafina, Dasani, Evian, Poland Spring, Smartwater, and Vermont Pure) and asked the earth sciences department to identify levels of various minerals—such as calcium, magnesium, copper, and lead—found in each. Samples were not tested for microorganisms, pharmaceuticals, or disinfectants. 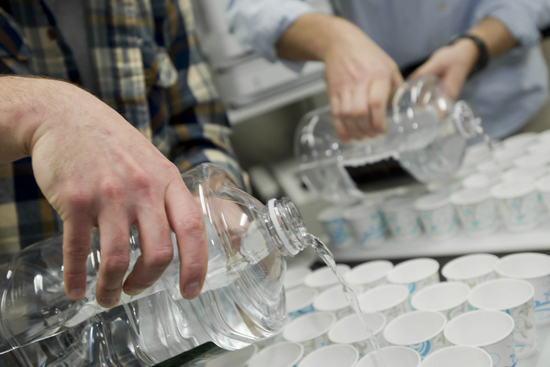 On test day, more than a dozen students crowded into the department’s student lounge, where an ocean of Dixie cups were spread across two tables—one holding samples of tap water, the other Vermont Pure bottled water. Each student took a whiff of coffee grounds (to clear the palate) before drinking. They then cast ballots for which they preferred and which tasted like tap water.

Valerie Pasquarella (GRS’13) couldn’t tell which sample was tap water. She prefers the “slightly metallic” flavor of Boston’s water and buys bottled water “only if I need a new bottle to bring tap water in,” she says.

Ryan Sullivan (CAS’12) also found the two samples similar in taste. “They both kind of tasted like water,” says Sullivan, who drinks filtered water at the dorms. “Maybe my palate’s not as sophisticated.”

Turns out Sullivan isn’t alone. Of 67 taste-testers, only a third identified the tap water sample correctly, according to Phillips, who is also the director of the Center for Energy and Environmental Studies. Another third thought it was bottled water, and the remaining participants couldn’t tell the difference.

The water tests revealed that both samples were safe to drink by Environmental Protection Agency and Food and Drug Administration standards. Vermont Pure contained higher levels of magnesium and calcium, and the tap water had higher levels of phosphorus, lead, and copper. (Magnesium, phosphorus, and calcium are not regulated by either agency. While not harmful, they do affect taste.)

The water samples taken by Landesman before spring break revealed a similar trend, with none registering at or above EPA and FDA guidelines. Among all the bottled samples, Evian contained the highest mineral levels, with magnesium measuring nearly three times that of tap water.

Cutler Cleveland, a CAS professor of geography and environment, cohosted the event with Phillips, and he pushes for more people to drink tap water. Bottled water companies, Cleveland says, launched a “campaign of misinformation and propaganda saying tap water is not safe when in the majority of cases it is.”

Yet Phillips says that some faculty members remain unconvinced, hence the presence of the water cooler.

But what about that water cooler? Both sides still have their points of view pasted to the wall behind it, alongside a petition with dozens of student signatures advocating its removal.

“I have a feeling its days are numbered,” Cleveland says. 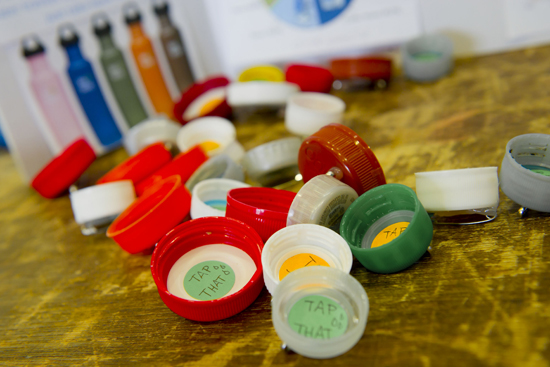 The Environmental Student Organization, which also advocates for tap water, held a similar taste test at the GSU Link the same day. You can see posted highlights of those water tests on the group’s blog.

Bottled vs. Tap: Which Tastes Better?

There are 26 comments on Bottled vs. Tap: Which Tastes Better?