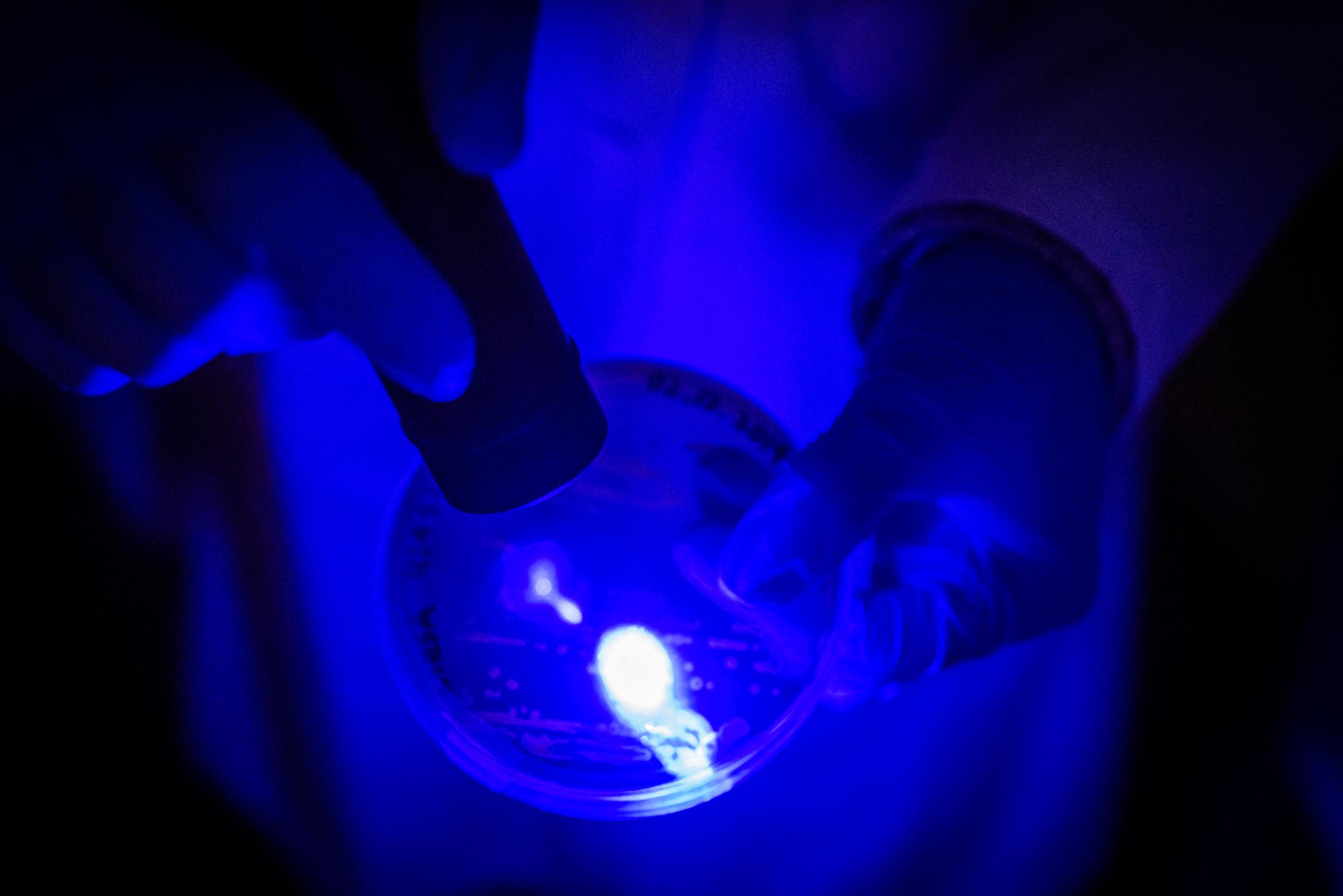 Why Phototherapy Will Be the Next Frontier in Combating Antibiotic Resistance

BU engineers have developed a new, light-based weapon in the fight against antibiotic-resistant pathogens like MRSA

Scientists are locked in a high-stakes race against bacterial evolution, racing against adversaries that can spawn a new generation in less time than it takes to wash a load of laundry. New strains of antibiotic-resistant pathogens are emerging faster than we can develop drugs to fight them, and experts warn that there may come a day when modern medicine as we know it is endangered by superbugs we can’t kill.

The US Centers for Disease Control and Prevention reports that 2.8 million antibiotic-resistant infections occur in the United States each year, resulting in 35,000 deaths. More than half of these fatalities are caused by a single organism, methicillin-resistant Staphylococcus aureus (MRSA), a strain of bacteria that can cause severe skin and soft tissue infections, sepsis, and pneumonia. Over the years, MRSA has developed multidrug resistance to many conventional antibiotics, making it difficult to treat and cure.

Now, a team of scientists from Boston University’s College of Engineering is taking the fight against MRSA into a new frontier. Using photolysis—a process by which molecules are broken down by light—Ji-Xin Cheng and his team found they could temporarily weaken MRSA’s defenses enough to make it vulnerable again to several classes of antibiotics. In other words, you don’t need to outrun MRSA to beat it. You just need to crack its armor.

“Our therapy is novel because instead of using a drug-based approach, it takes physical aim at the structure of the cell itself,” says Cheng, a professor of biomedical engineering and of electrical and computer engineering, and senior author of an Advanced Science paper describing the approach.

The breakthrough got its beginnings back in 2017, when Cheng’s lab began exploring new optical microscope techniques to study S. aureus. They hit a snag. It turned out a molecule called staphyloxanthin (STX), the signature golden pigment found in S. aureus, was prone to bleaching by blue light, making it too unstable for microscopy. But another revelation soon captured their attention: this photobleaching had destroyed the majority of a MRSA colony. It wasn’t long, Cheng recalls, before his team turned to a much more consequential question: “If we bleach [MRSA’s golden pigment], can we kill the bacteria?”

The researchers discovered that blue light photons catastrophically damaged the bacteria’s membrane, wiping out 90 percent of MRSA cells. It was a promising finding, but not a home run. To finish off that last 10 percent, the scientists tried an innovative one-two punch, using blue light photolysis to break apart MRSA’s cell membrane, followed by a dose of hydrogen peroxide. The combination therapy eradicated 99.9 percent of the MRSA colony.

Bolstered by this success, Cheng’s team set its sights on an even more tantalizing question: could phototherapy help revive the use of common antibiotics against MRSA? With its rigid molecular structure, STX normally fortifies MRSA’s cell membrane, making the bacteria essentially impermeable to many drugs.

The researchers took aim at MRSA’s golden armor, STX, to see if destroying it could improve the bacteria’s susceptibility to drugs. This time, using phototherapy and antibiotics, the researchers attacked MRSA colonies in culture dishes and in mice.

For four consecutive days, the mice with MRSA skin infections were treated with 10 minutes of pulsed light followed by topically applied daptomycin, an antibiotic to which MRSA is known to be resistant. The result? The combination therapy killed 95 percent of the bacteria. After treatment, the infected skin appeared healthier and had significantly less swelling and redness than before.

Even more encouraging, the pulsed blue light laser caused no damage to the skin or surrounding tissues. Since STX is not produced by the human body, “we can use a very low dose of laser that’s well below the safety limit for human skin,” says Jie Hui, a postdoctoral researcher in Cheng’s lab and the study’s lead author. “That’s the beauty of this method.” From a patient perspective, the treatment is painless and safe.

If this combination therapy works on human skin—a clinical trial investigating the therapy’s efficacy in treating MRSA-infected diabetic ulcers was planned to begin this year with collaborators at Boston Medical Center, but is now on hold because of the coronavirus pandemic—it would break new ground in restoring the use of conventional antibiotics in the fight against MRSA.

While the most obvious application is for skin infections, burns, and diabetic ulcers, the possibilities of phototherapy don’t end on the surface, Hui says. “In the future, we can explore how to use this technology inside the body—infections of the ear or nose or urinary tract, even the lungs or bloodstream,” he says. “However, for these sites, we would need to develop more specialized light delivery devices and strategies.”

Though much work is left to be done, one thing is certain, Hui says: “Using photons to fight antibiotic resistance will definitely be the next frontier.”

Why Phototherapy Will Be the Next Frontier in Combating Antibiotic Resistance