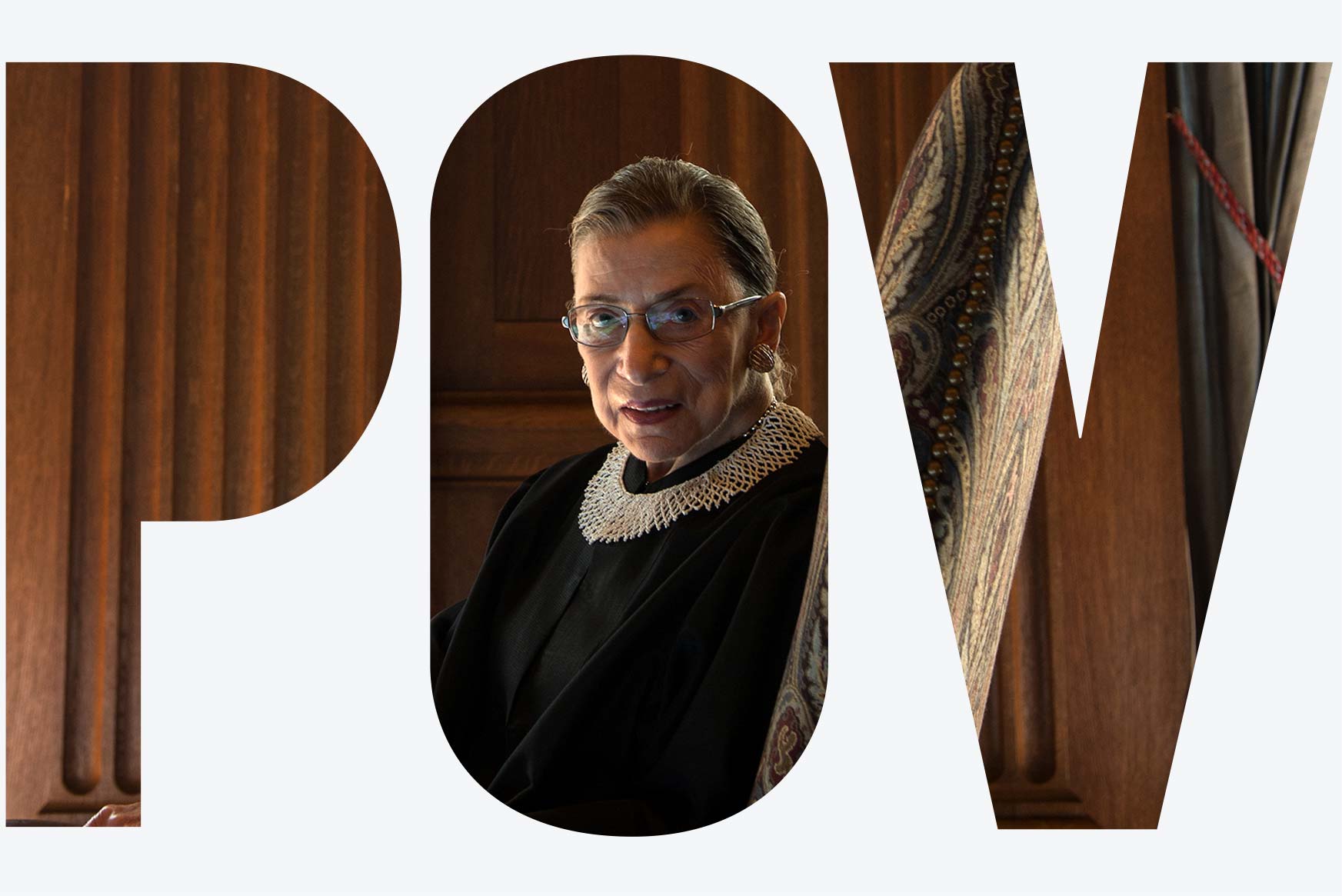 POV: Ruth Bader Ginsburg Fought Tirelessly for What She Believed Was Right

“Fight for the things that you care about, but do it in a way that will lead others to join you.”

When Ruth Bader Ginsburg entered Harvard Law School in 1956, one of only 9 women among 543 men, the dean asked why she felt entitled to be in the class, taking the place from a man. Later, despite a glowing recommendation of Ginsburg—an outstanding student on the Harvard Law Review—from Professor Albert Sacks, Supreme Court Justice Felix Frankfurter refused to interview her for a clerkship, expressly because she was a woman. Upon graduation, ultimately from Columbia Law School at the top of her class, Ginsburg received no offers from New York law firms. She eventually got a federal district court clerkship, but only after one of her professors threatened never to send the judge another law clerk if he refused to hire her. And, when she joined the faculty of Rutgers Law School in 1963, she quickly learned—unsurprisingly—that she was earning considerably less than her male colleagues. After Ginsburg confronted the dean about the wage disparity, he replied that one of her male counterparts had “a wife and two children to support” while she had “a husband with a good paying job.” She then joined her women faculty colleagues to challenge the inequity through the newly enacted Equal Pay Act.

There is little doubt that these and other forms of discrimination that Justice Ginsburg experienced at the beginning of her legal career stoked the fire inside of her that ultimately changed the course of history in our nation.

Like millions of other women in this country, I stand on the shoulders of Justice Ginsburg. Before President Jimmy Carter first appointed the petite “legal giant” to the D.C. Circuit in 1980, she successfully argued seminal cases before the Supreme Court that have helped to dismantle entrenched forms of discrimination on the basis of sex. Ginsburg’s strategy to argue many of those cases on behalf of male victims of gender-based discrimination is often cited as evidence of her impressive legal acumen. She understood, as the late Professor Derrick Bell’s interest convergence theory provides, that the interests of those marginalized in society—here, women—tend to be recognized only when they converge with those in the governing elite—here, men. Time and again, she pressed the nine male justices before her in oral arguments to consider the impacts of sex-based discrimination against a man, gradually establishing important precedents that would provide greater protections for women. Indeed, in Craig v. Boren, her arguments challenging an admittedly “non-weighty” Oklahoma state statute that allowed women to buy “near beer” at age 18, but required men to wait until age 21 to do so resulted in the Court’s decision to apply heightened scrutiny to all laws governed by gender classifications. For all the gains that her litigation strategy earned for women, history will count Justice Ginsburg among the greatest legal minds of all time.

Yet, the strategy that Ginsburg used in these legendary cases before the Supreme Court were not hers alone. Ginsburg, too, stood on the shoulders of a woman who came before her: Pauli Murray, the African American valedictorian of her class at Howard Law School, whose ideas not only laid the groundwork for the arguments that Thurgood Marshall, Spottswood Robinson, and others would ultimately use to overturn Plessy v. Ferguson’s separate but equal doctrine in Brown v. Board of Education, but also were directly used by Ginsburg “to convince the Supreme Court that the Equal Protection Clause applies to women.” In fact, Ginsburg credited Pauli Murray—who coined the term “Jane Crow,” and who the late Justice Thurgood Marshall called the author of “the bible of the civil rights movement”—for initially formulating the argument that the 14th Amendment’s Equal Protection Clause also applied to women. Ginsburg even listed Murray as a coauthor of the brief she volunteered to write in the case of Reed v. Reed, the 1971 Supreme Court ruling that extended the Equal Protection Clause of the 14th Amendment to women.

As we reflect on Justice Ginsburg’s legacy, we must guard against creating a caricature of the progressive icon she has become….To do so would be a disservice to the many invisible fighters along the way and, more so, to the Justice’s truly impressive memory.

Justice Ginsburg realized that she was but one member of a movement to give voice to the voiceless. Speaking of Pauli Murray and colleague Dorothy Kenyon at the American Civil Liberties Union, she proclaimed, “We’re standing on their shoulders. We’re saying the same things they said, but now at last society is ready to listen.” As her words reveal, Justice Ginsburg understood that she was not here to win a marathon alone, but rather to run one leg in a relay race toward a more equitable future. She knew that no single person achieves lasting progress on the people’s behalf—not even the Notorious RBG.

Indeed, Justice Ginsburg herself reflected both the aspirations and the limits of the feminism she espoused and ultimately came to embody for the nation, as her own hiring record for African American clerks (only one throughout her 38-year career as a judge) did not align with her progressive jurisprudence on racial issues and her personal embrace of Pauli Murray and Professor Kimberlé Crenshaw’s theory of intersectionality, of which Murray’s words about the “indivisibility of her identity” are a foremother.

As we reflect on Justice Ginsburg’s legacy, we must guard against creating a caricature of the progressive icon she has become—the feisty, radical woman who single-handedly achieved constitutional protections for women and who represents all of our aspirations for a more just and equitable society that is truly of, by, and for the people. To do so would be a disservice to the many invisible fighters along the way and, more so, to the Justice’s truly impressive memory. As the president asserted, “Whether you agree with her or not, she was an amazing woman who led an amazing life.”

Justice Ginsburg fully recognized that progress is incremental and often requires compromise. “The Court generally moves in small steps rather than in one giant step,” she said. “Real change, enduring change, happens one step at a time.”

She knew how to play the long game. She realized that one did not have to win every argument to continue the march toward justice, and she lost many battles along the way. “I do hope that some of my dissents will someday be the law,” she said. “That’s the dissenter’s hope: that they are writing not for today but for tomorrow. Dissents speak to a future age.” Fortunately, Justice Ginsburg lived to see her dissent in Ledbetter v. Goodyear Tire & Rubber Company, which she read with great passion directly from the bench—in my imagination, with her Rutgers Law School faculty experience at the back of her mind—become law through the Lily Ledbetter Fair Pay Act of 2009.

Since learning of Justice Ginsburg’s death, I find myself thinking about the incredible resilience she displayed throughout her life. The death of her mother the day before she graduated from high school. Her husband’s battle with cancer when they were both law students. Recurring, explicit sex discrimination she faced in the job market and in her jobs as a lawyer. The lonely years she faced as the only woman on the Supreme Court after Justice Sandra Day O’Connor’s retirement. Her repeated battles with cancer and other illnesses while she was a Supreme Court justice, coupled with too many hard-fought, but lost battles that resulted in dissents instead of majority opinions.

In addition to acknowledging the great debt that I—that we—owe her for her contributions to our society, particularly for the ways in which we have inched closer to gender equality, and thanking her for the many ways in which she has changed all of our lives for the better, I have been looking more and more to Justice Ginsburg as a model of strength and forbearance in what many of us view as a period of mounting resistance to our calls for true equality, justice, and dignity for all and greater accountability for those who fail to show respect for those values and principles. Justice Ginsburg leaves a remarkable legacy that has truly changed the course of history. She is a towering figure in American jurisprudence, and yes, a symbol of hope and optimism that the arc of history truly does bend toward justice, to paraphrase Boston University alum Dr. Martin Luther King, Jr. (GRS’55, Hon.’59). No matter the challenge, Justice Ginsburg worked tirelessly for what she believed was right. She had the utmost integrity, never wavering from her principles even in the face of strong opposition. She gave of herself for something bigger—equality and our nation. She fought fiercely to advance her vision of equal justice for all people. And, she continued to fight and resist until her dying breath, proclaiming to her granddaughter Clara Spera: “My most fervent wish is that I will not be replaced until a new president is installed.”

May your wish be granted, so you can RIP, RBG.

POV: Ruth Bader Ginsburg Fought Tirelessly for What She Believed Was Right

There are 3 comments on POV: Ruth Bader Ginsburg Fought Tirelessly for What She Believed Was Right

POV: Ruth Bader Ginsburg Fought Tirelessly for What She Believed Was Right
3
share this