From the first sun-kissed silhouettes he snapped at spring training to the final champagne-splashed shots of the postseason, Billie Weiss gave fans an inside look at the Boston Red Sox historic 2018 championship run. The Sox manager of photography took people from the locker room to the field, onto team flights, and even into Mookie Betts’ living room the night he won the American League MVP award. Now back at spring training to start his eighth season with the team, he wonders what, if anything, could top all of that. “Where do we go from here? That’s as good as it gets,” says Weiss (COM’16).

Still, he spent the off-season thinking about new shots to try in 2019. The players were set to receive awards for their 2018 performances, travel to London to play the New York Yankees, and receive their World Series rings. “I have a little notebook with some ideas,” Weiss says. “But we kind of like to keep them to ourselves.”

That’s as good as it gets.

Fans celebrate with the 2018 World Series champs during the parade through Boston.

Weiss arrived in Boston in 2012 to begin the graduate photojournalism program at the College of Communication and to intern with the Sox. At COM he found mentors in professors who had photographed the team for the Boston Globe and the Associated Press. The Red Sox hired him in 2013.

“I work in a marketing department, but I try to take a journalistic approach,” Weiss says. His images end up on ticket stubs, billboards, magazine covers, and websites. They tell the story of the team by capturing moments that are by turns action-packed and intimate. One secret to that success? Weiss likes to cover every angle. He manages a staff photographer, two interns, and freelancers for big games. Plus, he’s usually carrying three Nikon D5 cameras and a variety of lenses—and triggering remote cameras aimed down at the field from Fenway Park’s roof. Scroll through the Red Sox Instagram feed and you get the impression that a team photographer is always in the right place at the right time.

It lined up perfectly…and it was another great catch by Beni.

The Wall of Wins

In 2018, some of those shots found a new home: on the wall of first-year manager Alex Cora’s office. Cora asked Weiss to give him one defining photo from each win. By the end of the regular season, he’d hung 108 images—a visual record of the team’s best regular season ever. From there, the Red Sox stormed through the playoffs and beat the Los Angeles Dodgers to win their ninth World Series.

“To see players react the way they did and shoot the celebration, on the field and in the clubhouse, it was a real experience,” Weiss says. “And it’s awesome that in a small way I have the opportunity to be a part of that moment.”

“I work in a marketing department,” says Billie Weiss (COM’16), Red Sox manager of photography, “but I try to take a journalistic approach.” Photo by Winslow Townson 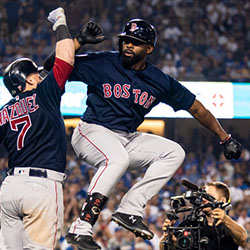 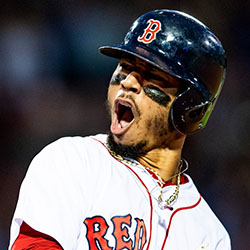 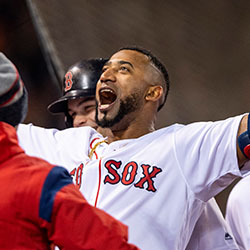 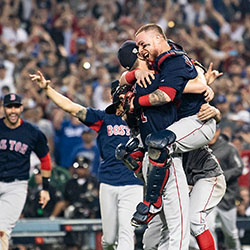 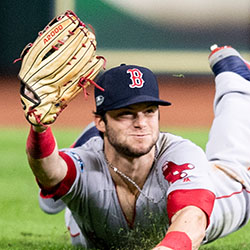 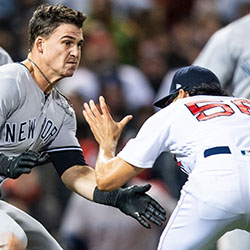 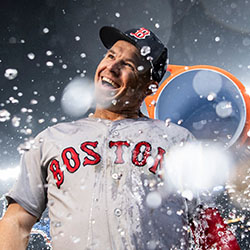 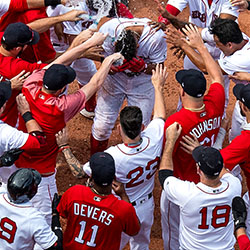 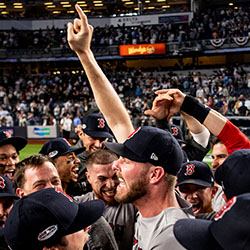 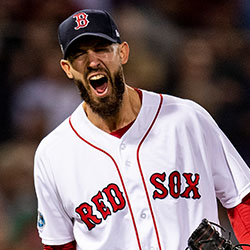 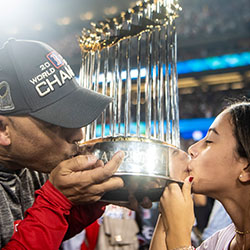 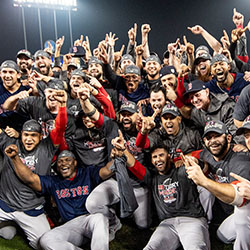 It’s awesome that in a small way I have the opportunity to be a part of that moment.

Red Sox outfielders (from left) Mookie Betts, Andrew Benintendi, and Jackie Bradley, Jr., join the celebration after the final out of the 2018 World Series. Weiss says it’s one of his favorite images from the historic season.

Weiss continues to savor one of his final shots of 2018, captured seconds after Chris Sale struck out Manny Machado to end the World Series. The three outfielders, Betts, Andrew Benintendi, and Jackie Bradley Jr., sprint toward the infield, elated, preparing to leap into the pile of celebrating teammates.

A member of the Red Sox video team, Kellan Reck looks for action and emotion

If you’re hoping to make an appearance on a video board at Fenway Park during a Red Sox game, here are two smart tips from the man who can make it happen: break out your Sox gear—and your dance moves.

Those are the kinds of money shots the cameras are looking for, says Kellan Reck (COM’14), manager of Red Sox Productions. “The best is always the funky person who is way better at dancing than you’d think they would be, based on looking at them,” he says. “That’s always fun. It gets the crowd going.”

Reck’s group—seven full-timers, several part-timers, and about two dozen day-of-game staff—operates four cameras and the park’s control room. “It’s a huge operation,” he says. “We’re running all of the video boards, live, during 81 home games, plus playoffs.” In addition to shooting and editing for the video boards—like the open video, played at every home game before the players take the field—Reck also helps produce and build Red Sox Report, a 30-minute weekly show broadcast year-round on NESN.

A lifelong Red Sox fan who joined the club part time as a College of Communication senior and full time after graduating, Reck prefers in-game “cinematic” shooting—the more action and emotion, the better. He was standing in the camera pit at Dodger Stadium when the Red Sox won the 2018 World Series.

“I had to grab a camera and run out onto the field,” he says. “And it’s just craziness, because all the guys are out there, so excited. You’re just basically rolling on any shot you can get of guys hugging, crying, laughing. And it’s all happening so fast, and your phone’s blowing up in your pocket. It was really fun.”—Cynthia K. Buccini

Listen to an interview with Billie Weiss (COM’16) on the new Proud to BU podcast.