In the video above, undergraduates explain why they spend their four years at BU avoiding that giant symbol in the middle of Marsh Plaza. Video by Bill Politis. Photo by Cydney Scott

Next weekend, hoards of BU seniors will drag their families to Marsh Plaza for Commencement’s most important photo opp: the grads, beaming in their caps and gowns, will defiantly stand on the BU seal. Despite the temptation, they’ve managed to avoid this taboo act, because legend has it that anyone who steps on the seal won’t graduate, will end up living in their parents’ basement, and will suffer an untimely demise (OK, OK, we did some editorializing there).

Given the superstition about the seal, we at BU Today wondered whether there was any truth to it and what we could find out about the seal’s history. Read what our investigation unearthed below. 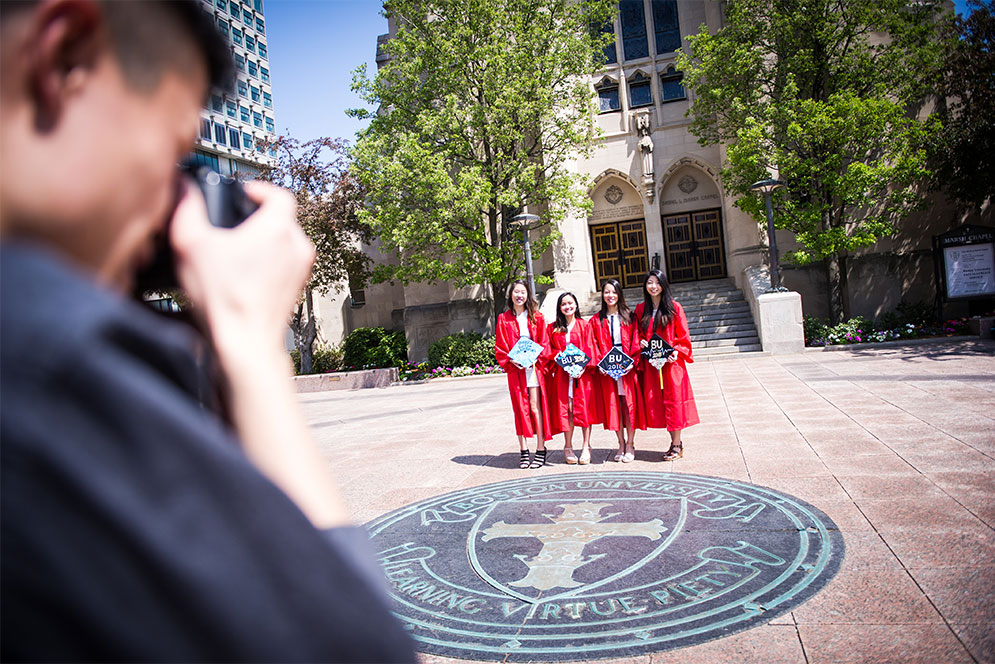 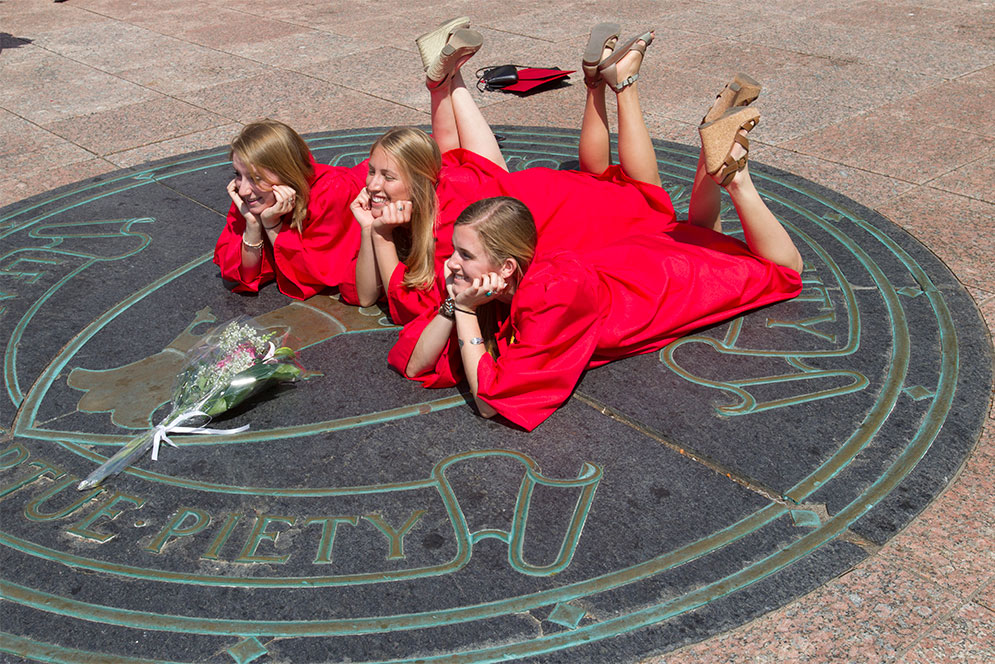 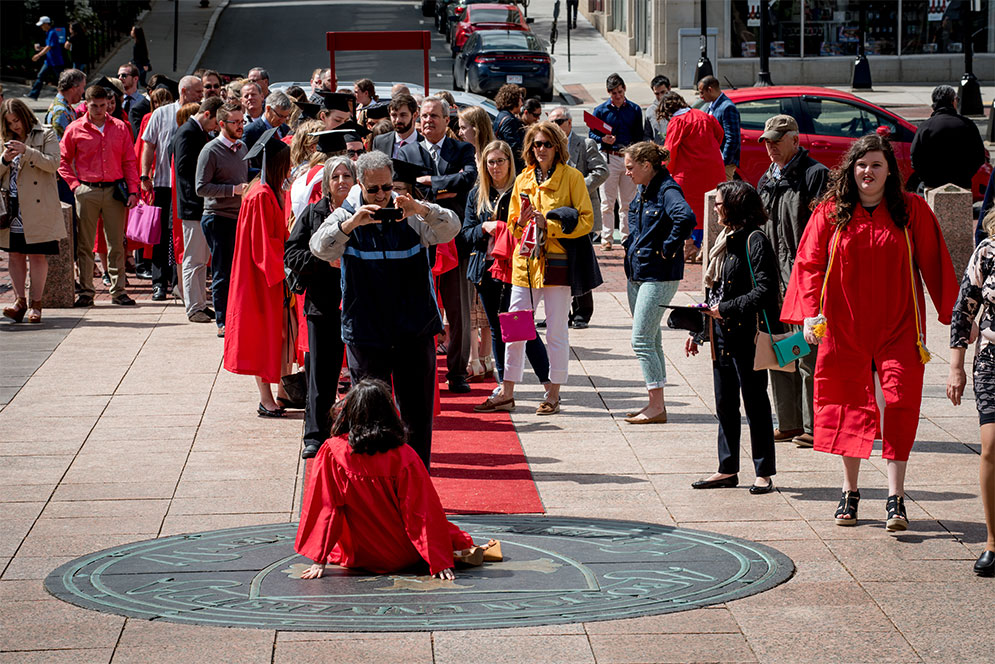 It’s a rite of passage for graduating BU seniors to stand (or, sometimes, sit) and take their picture on (what they believe is) the seal. Photos by Jackie Ricciardi, Winslow Martin, and Mike Ritter

Is it true that if you step on the seal you won’t graduate?

Over the years, a few brave souls have admitted to stepping on the seal prior to Commencement and still managing to graduate (see our video above). Power to them, but do you really want to take that chance?

What is the seal made of?

Black stone with bronze letters. In fact, folks at Facilities Management & Planning were recently out on Marsh Plaza buffing it so it will be camera-ready for graduation.

Where did the legend come from?

No one knows. Seriously, if you have a theory, share it with us, because we spent a week trying to find the story’s origins and no one can say for certain how it started. Rev. James Olson, then Marsh Chapel associate dean, was interviewed for a 2004 Daily Free Press article and said the myth is just fun lore. “There are not a lot of those here—probably because the campus is fairly new,” according to Olson. The University “has only been on the Charles River Campus since the 1950s.”

Now this may sting…

We’re sorry, but we have to tell you—the official-looking thing that we call “the Seal” on Marsh Plaza isn’t actually the BU seal—it’s the University’s crest, or coat of arms. And it’s unclear how the names were switched. 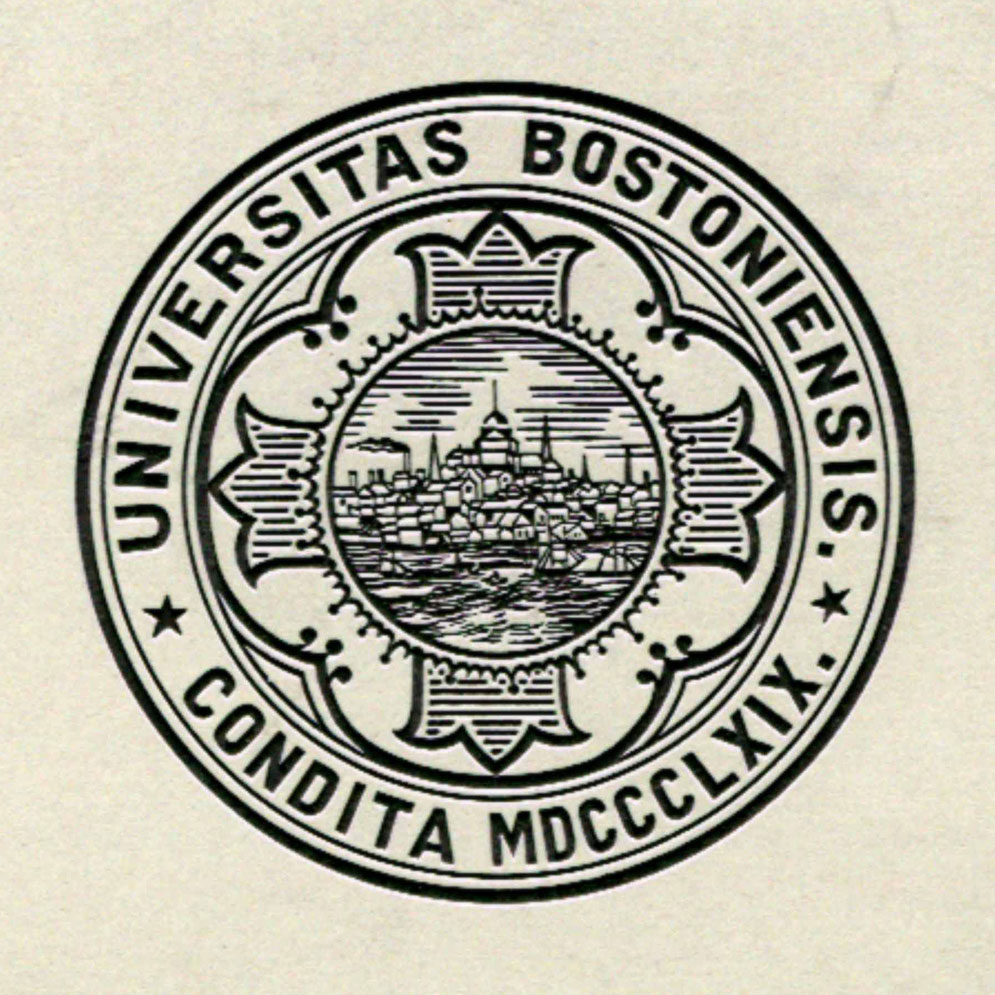 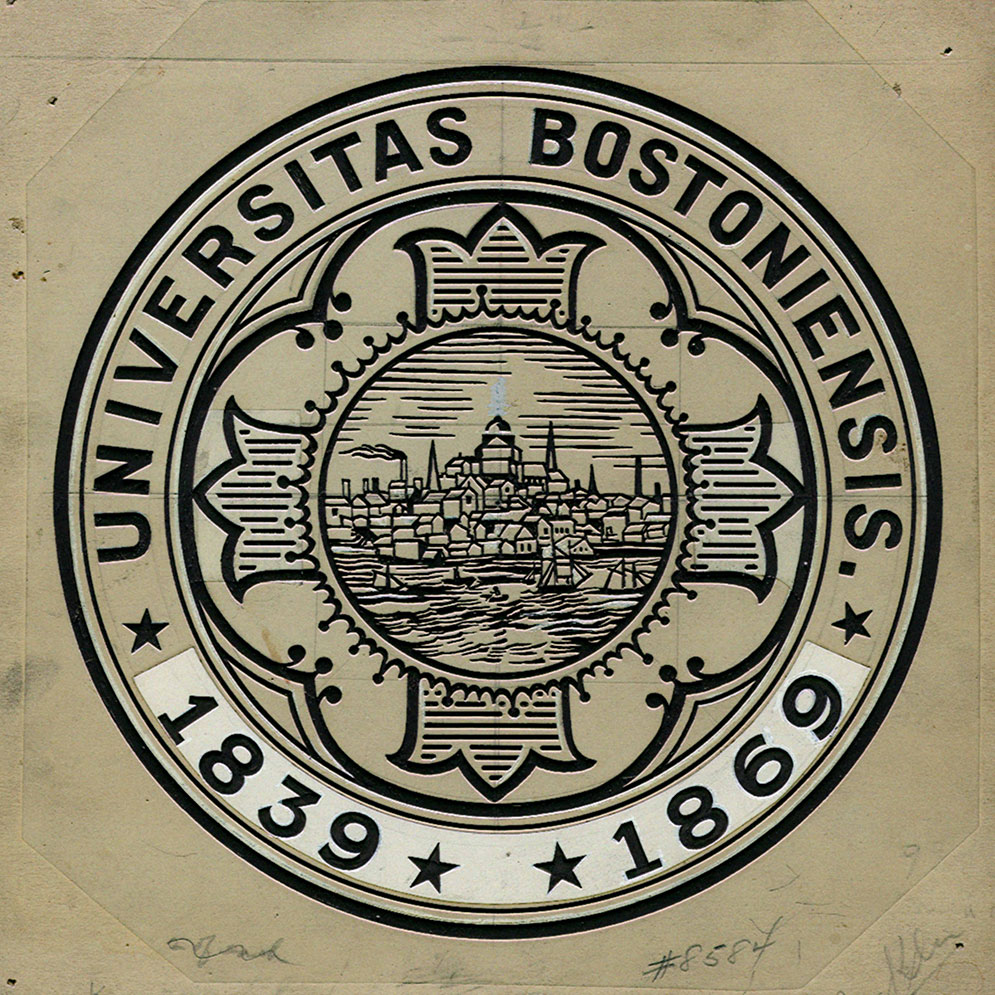 A comparison of the old BU seal and a prototype design of the new seal, circa 1940, shows small tweaks, like the addition of numeric years and eliminating the spire from the Massachusetts State House. Images courtesy of the Howard Gotlieb Archival Research Center

The real seal was designed by BU’s first president, William Fairfield Warren, shortly after the University was chartered in 1869. “The entire inner field is spanned by the arms of the Holy Cross floriated—symbol of the Christian heritage and aim of the founders,” Warren wrote in the April 1914 issue of the University’s alumni magazine, Bostonia. “Central to all is represented in outline the city of Boston, with its culmination in the beautiful State House dome.”

Brother Larry Whitney (STH’09,’18), University chaplain for community life, who frequently (and always politely) corrects people on the difference, says the seal can be found on the cornerstone of many University buildings, among them the College of Arts & Sciences, the School of Theology, the School of Law, and the College of Fine Arts, and Marsh Chapel.

It’s used for only the most formal occasions, such as diplomas, formal invitations, and ceremonial documents when OK’d by the Office of the President. 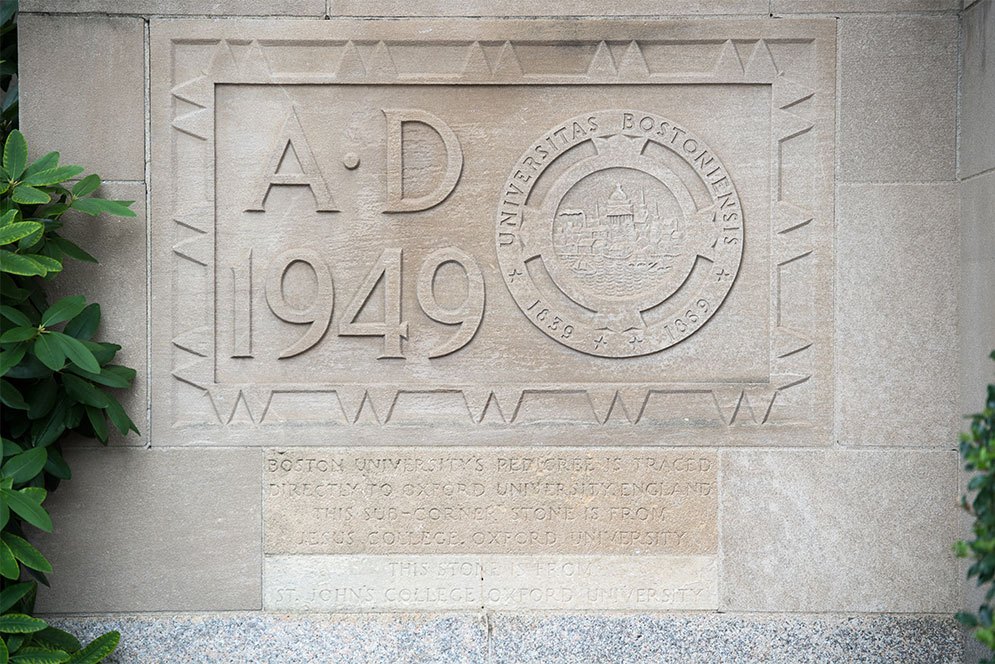 The BU seal is used for only the most formal occasions, like on diplomas, and can be found on the cornerstone of many University buildings, including Marsh Chapel (above). Photo by Cydney Scott

Then what on earth is that imposter in the middle of Marsh Plaza?

It’s the University’s coat of arms, or crest, a “distinctly different symbol with its own history,” explains Daryl Healea (STH’01, Wheelock’10), CAS assistant dean of curriculum and enrollment services, whose dissertation was on Daniel L. Marsh (STH’08, Hon.’53), the University’s fourth president.

Marsh commissioned a coat of arms from the New England Historic Genealogical Society’s Heraldry Committee in the 1940s, according to his letters stored in the Howard Gotlieb Archival Research Center. The team built off the seal’s cross and added three gold crowns, which “alluded to the arms of the city of Boston, England, and also to the arms of the University of Oxford,” writes Kathleen Kilgore in Transformations: A History of Boston University. (Methodism founder John Wesley was a graduate of the University of Oxford, and BU was founded by Methodists.) The three crowns used in BU’s crest refer to the three kings of England who founded Oxford, per Oxford’s crest. 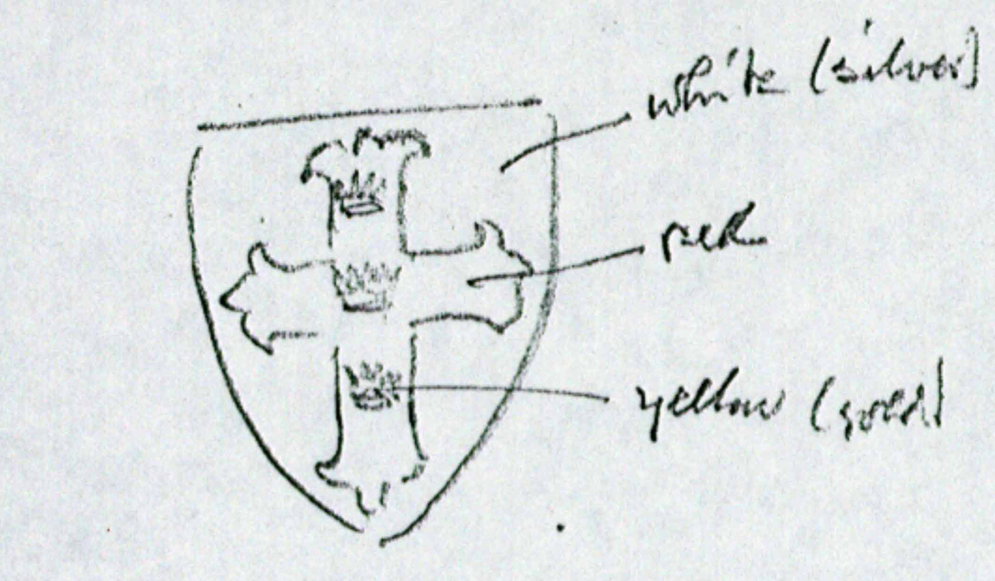 A hand-sketched mockup of the University’s coat of arms from December 1946. Image courtesy of the Howard Gotlieb Archival Research Center.

“The motto ‘Learning, Virtue, and Piety’ was taken from the University charter,” Kilgore writes. “The color scarlet was chosen to symbolize fire and blood, with white for the blending of all colors of life. The gold of the crowns, Marsh said, was meant to suggest not royalty but ‘appreciated service.’” 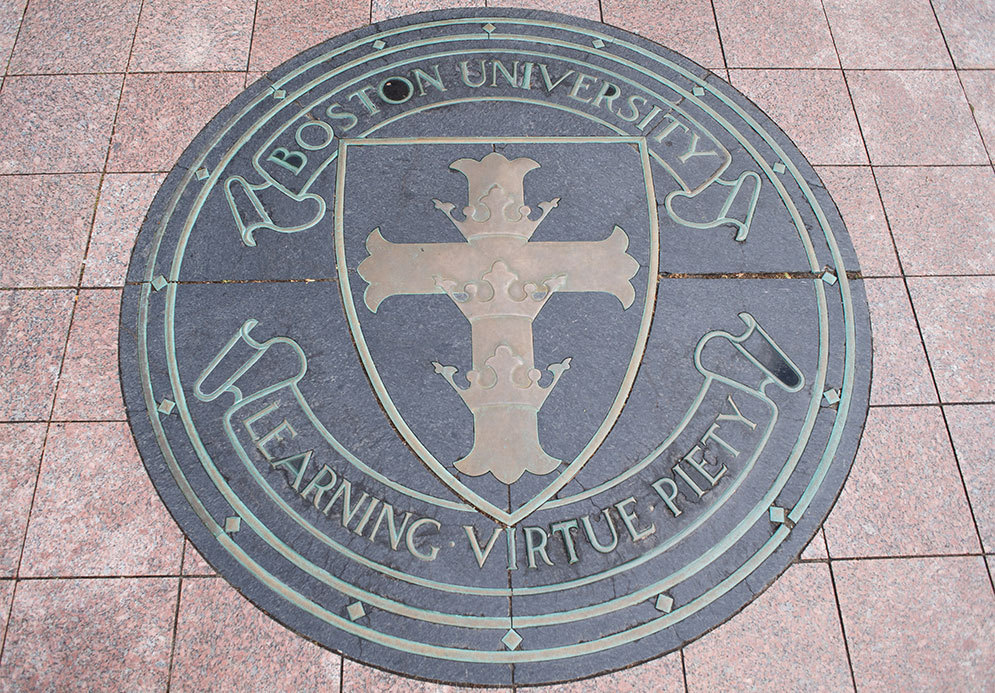 The three crowns used in BU’s crest refer to the three kings of England who founded the University of Oxford, per Oxford’s crest. Photo by Cydney Scott

The coat of arms was adopted by the University trustees in March 1947 and was included on a number of emblems at this time (like the University’s flag), but, Healea says, the “plaza inlay itself was likely installed around the time that the chapel’s construction was completed, in the early 1950s.” The plaza was renovated and rededicated in 1999.

Will we really start calling the round thing in the middle of Marsh Plaza the crest?

Don’t count on it. Despite the fact that its correct name has been reported many times, popular opinion always seems to win out.

Anything else you want us to ruin?

The Myths and Legends Behind the BU Seal

The Myths and Legends Behind the BU Seal
5
share this