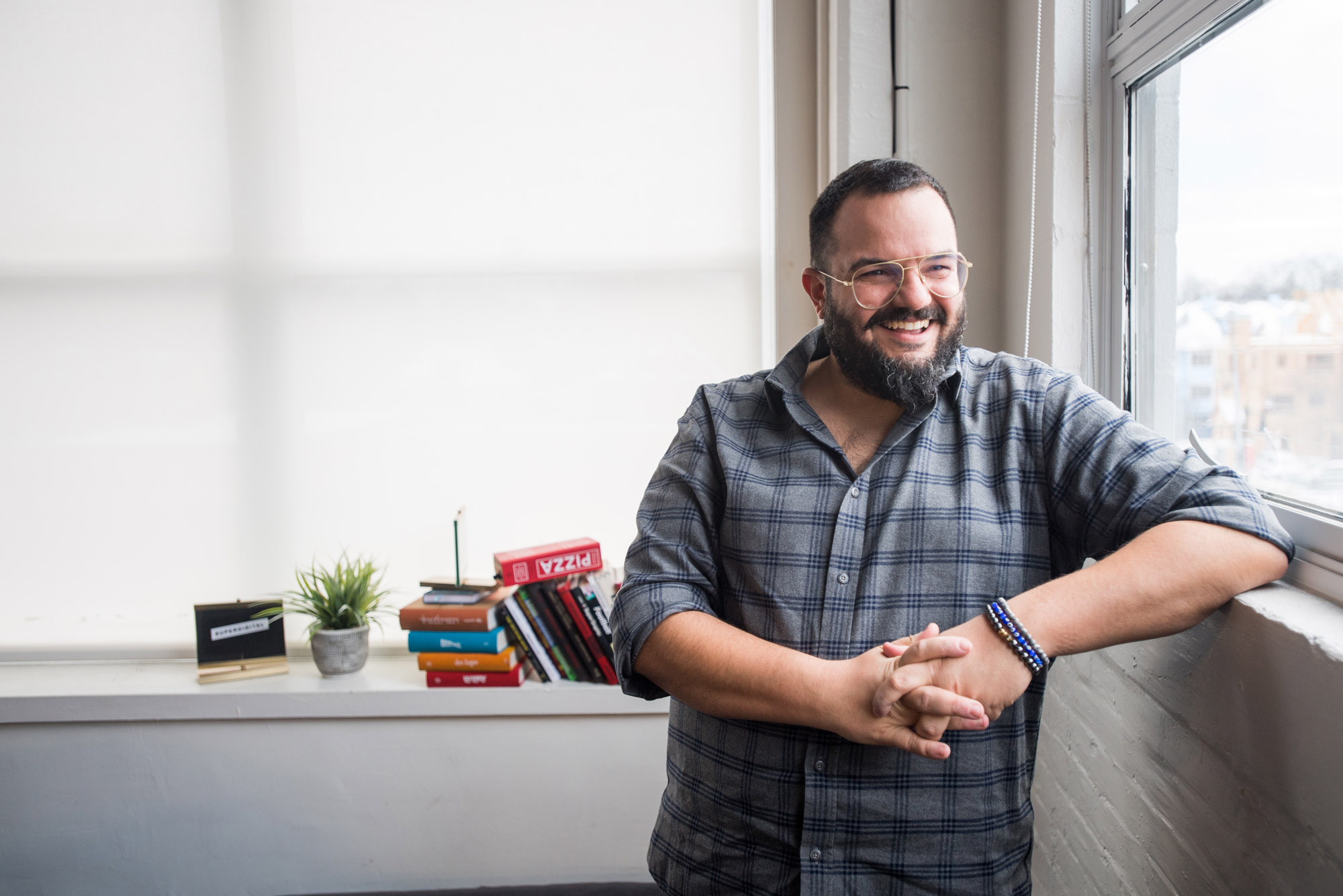 In our series “Jump-start Your Job Search,” BU Today brings you short interviews with BU alums who are leaders in their fields, such as banking, advertising, tech start-ups, journalism, or nonprofit organizations. They talk about how they got to be where they are and what they’ve learned from their mistakes. They tell us what they look for when hiring and offer advice for those just embarking on a career.

Enter Superdigital headquarters, above a boxing gym on Comm Ave, and you know you’re not at a typical corporate headquarters. In its two big, loft-like, decidedly unglamorous spaces, employees work on laptops at communal tables amidst boxes of client merch, scribble-covered whiteboards, and racks of prototype T-shirts. A black Lab wanders through.

Superdigital founder and creative director Assaf Swissa (MET’05) will tell you that the company’s culture is not very corporate either—no one pays much attention to titles, everyone does a little of everything, and passion for the work trumps a well-formatted résumé every time.

Superdigital is a creative agency that helps clients with social media, paid media, content production, digital strategy, and numerous other avenues for getting their brand into the public eye or helping their entrepreneurial ventures succeed. “It’s hard to put it in a jar,” Swissa says.

Founded in July 2013, Superdigital has a couple of dozen casually dressed employees, mostly full-time, augmented by a few freelancers. Its client roster includes New England Patriots superstar receiver Julian Edelman—Swissa is the receiver’s business partner and he was co–executive producer of the Edelman documentary 100%, which debuted on Showtime this year—and brands from Papa Gino’s to Pop Corners.

Before Superdigital, Swissa started College Bellhop, a laundry service for college students, and Unreal Candy, an all-natural candy company. He also learned a lot about business, creativity, and celebrity just being around his father’s Newbury Street hair salon, Pini Swissa Salon, where customers have included bold-faced names like Tom Brady and Gisele Bundchen.

Prior to founding Superdigital, Swissa worked at well-known international marketing agency Digitas. When asked for advice for job seekers, he gave insights we don’t often get from alums who work at larger corporations or in more formal fields.

Swissa: Passion would be the first one. Passion and mindfulness. People like me are looking for someone to depend on. And usually when someone is passionate and fired-up that makes them dependable, and they can help you grow something. And mindfulness is just thinking critically about what we’re doing. Is the action you’re taking really the thing you should be doing? It’s being thoughtful about what you’re doing and why.

Deal breaker? I guess anyone who stands on leveraged success. I want to hear about independence, about self-starting. Not your SATs. Don’t tell me what you can do, show me.

What kinds of questions do you ask during an interview?

I have the best group of people in Boston by far, and I think it’s because I don’t ask those typical questions. I want to hear about what they think is really just awesome right now on Instagram. I want to know what kind of things they care about in their private life. Us being a creative business, that’s more reflective of what you can contribute than questions about the standard skill set. I mean, I ask you about your background and all that stuff, but I try to get to know what kind of person you are outside the office.

What are some common mistakes that young job candidates make?

Don’t wear a suit. Oh, man. They come in wearing suits and ties! The second I see a suit, I’m already checked out, and it takes me a lot to come back. Wear your coolest T-shirt, your funkiest sneakers. You’re applying for a creative job—why would you look like you’re a teller at Bank of America?

The other thing I would say is, make the interview a conversation. Don’t just let me ask you questions about your past. Engage me. Let’s talk, let’s connect. It’s kind of like a date. You’ve got to feel how this is going to go.

When you were a BU undergrad, did you know what you wanted to do for a career?

No. I started College Bellhop while I was still at BU largely because I was scared to get a real job. I liked the idea of not having to answer to anyone. Little did I know that a business owner has more bosses than anyone else. Technically, that was a success, but it feels like a failure because of how many years I put into it while knowing that it wasn’t my true ambition. A lot of people think that millennials are lazy, but I don’t see it that way. It’s not that they’re lazy, but they’re so concerned with being on the right track. They go to do something and there’s a lot of apprehension that it might not be the right move. It’s about: what do you aim your time at?

What advice would you give to someone interested in your industry?

Show me what you can do. Build an Instagram account. You can do it in a weekend. Go make anything. Just go make. Show me anything, not like your grades and a résumé. I read a résumé and I tune out.

What expectations do you have for new employees?

It’s sort of the opposite. We’re dancing around them. We want to make sure they’re having a great experience, because we know we’re crazy. It’s definitely an alternative place. So come in with an open mind and be ready to learn. There’s going to be a lot coming at you all at once, but don’t be intimidated, just let it flow through you. Process as much as you can and just be chill with everybody.

What’s the competition like for new graduates in your field?

People want to work here. People come with agency backgrounds and that’s cool and that works. But only recently are we a place that looks for agency backgrounds. If you’re creative and you’ve got some fire and you can show and not just tell, we like it.

What mistakes have you made during your career, and what did you learn from them?

Oh, my—a lot, a lot of mistakes. I sold College Bellhop in 2010. I was going to take my money and go to Hollywood and try to be a writer for film and TV. And right before my flight, a former boss of mine at Digitas and I started talking about this candy thing. I stayed in Boston to start Unreal Candy. With Unreal Candy, I drank the Kool Aid hard, I believed in myself and I believed in the hype, and it led to my firing from a business I started, which I didn’t know was possible. It was a lot of hubris. When we sold to all the retailers, I thought, oh that’s it, we’re in. But if you can’t get off the shelf, if you can’t move product, then getting on the shelf doesn’t matter.

Don’t believe the hype. Julian Edelman is the perfect example of that. I am truly in awe of how he is able to control the hype. He has every reason to believe all the hype around him, and yet he is able to behave as if it is his first day in training camp every day. You’ve gotta prove it every day.

Who has had the greatest influence on your career and why?

My father, I would say. My father is a creative genius. He is one of the best talents in his space in the country, and I learn a lot from that. I perhaps learn more from his struggles being a creative and having to run a business. It is hard to be both the creative and the business. I’ve learned a lot from him about that over the years.

And the other is Julian. That guy, he plays through pain. There’s a sign in the Patriots offices somewhere, it says something like, “Mental Toughness. Do what’s best for the team when everything isn’t perfect for you.” Julian embodies that.