2018 Commencement speaker Congressman John Lewis (Hon.’18) (D.-Ga.) urged BU graduates to “get out there and vote like you’ve never voted before.” His address drew a standing ovation. Watch the civil rights leader’s entire speech in the video above. Video by BU Productions. Photo by Michael D. Spencer

John Lewis told BU’s Class of 2018 Sunday to enjoy their big day—then get to work.

“Take a long, deep breath, take it all in—and roll up your sleeves, because the world is waiting for you, waiting for talented men and women to lead it to a better place,” the civil rights leader said in his Commencement speech.

“My philosophy is simple. When you see something that is not fair, not right, not just, then you have a moral obligation to say something, to do something, stand up, speak out,” said Lewis (Hon.’18) (D-Ga.), the US representative from Georgia’s fifth congressional district since 1987, to the 7,072 graduates and 20,000 guests at Nickerson Field for the University’s 145th All-University Commencement. His impassioned oratory drew repeated standing ovations.

The ceremony began 20 minutes ahead of schedule, because the weather forecast called for thunderstorms, which never materialized, with the sun coming out and remaining mostly out until the end.

Lewis, one of the 13 original Freedom Riders, was beaten and jailed repeatedly during the Civil Rights Movement. He helped organize the 1963 March on Washington, where his friend and mentor, Rev. Martin Luther King, Jr. (GRS’55, Hon.’59), delivered his famous “I Have a Dream” speech. He spoke of writing a letter to King when he was 17, and King’s eventual invitation to meet with him in Montgomery, Ala., an invitation that led to a long friendship and Lewis’ prominent role in the Civil Rights Movement. He told the crowd that King spoke often about BU and the faculty and scholars he learned from here.

The longtime Georgia congressman told of growing up in the Jim Crow South, of signs everywhere marking separate facilities for “whites” and “colored.” When he asked his parents and grandparents about them, though, they told him that it was just the way life was and urged him not to get in trouble.

Change, he told the Class of 2018, is possible when people act courageously. Today, the only places you see those “whites” and “colored” signs are in a book, a museum, or a video, Lewis said, but much work remains to be done. While he didn’t mention the current occupant of the White House by name, he made a point of noting that both our democratic ideals and our planet are in trouble, adding: “We need young men and women, smart graduates of Boston University, to go out there and get into trouble.

“I urge you as you leave here, to participate in the democratic process, to get out there and vote like you never voted before,” he said to cheers from the crowd. “Be optimistic, don’t get lost in a sea of despair, but be bold, be courageous, and all will work out.”

President Robert A. Brown presented Lewis with a Doctor of Laws, saying, “You stand before us as an icon of the Civil Rights Movement, but also as a reminder that the fight for justice is never easy and it is never over. In your courage, we find the inspiration to carry on that fight. And we are better for it, both as a society and as individuals.”

Student speaker Yasmin Younis (COM’18) told graduates that BU was the right place for her to tackle her most difficult challenge: accepting herself and her Iraqi heritage. Hear her entire speech above. Photo by Michael D. Spencer. Video by BU Productions

Student speaker Yasmin Younis (COM’18) expressed the feelings of many of her fellow graduates when she said simply, “Mr. Lewis, you are the man!”

Younis talked in her speech about her personal journey as the child of Iraqi immigrants and the role BU played in helping her accept herself for who she was. “Being in a diverse environment like BU, I knew this was my one shot to learn to accept myself and to become the Yasmin Liwa Younis my parents believed I could be.” She spoke of the importance of reclaiming her full name, not the anglicized Yazmin she had adopted growing up.

“What better way for me to be me than by reclaiming my name,” she said, explaining that her first name is a flower in Arabic, her middle name is her father’s family name, a tradition in Iraqi culture, and her last name is the name of a beloved prophet in Islam.

Brown also awarded the University’s highest teaching honor, the 2018 Metcalf Cup and Prize for Excellence in Teaching, to Brooke Blower, a College of Arts & Sciences associate professor of history. He presented the Metcalf Awards for Excellence in Teaching to James A. Wolff, a School of Public Health associate professor of global health, and Elizabeth Co, a CAS senior lecturer in biology. 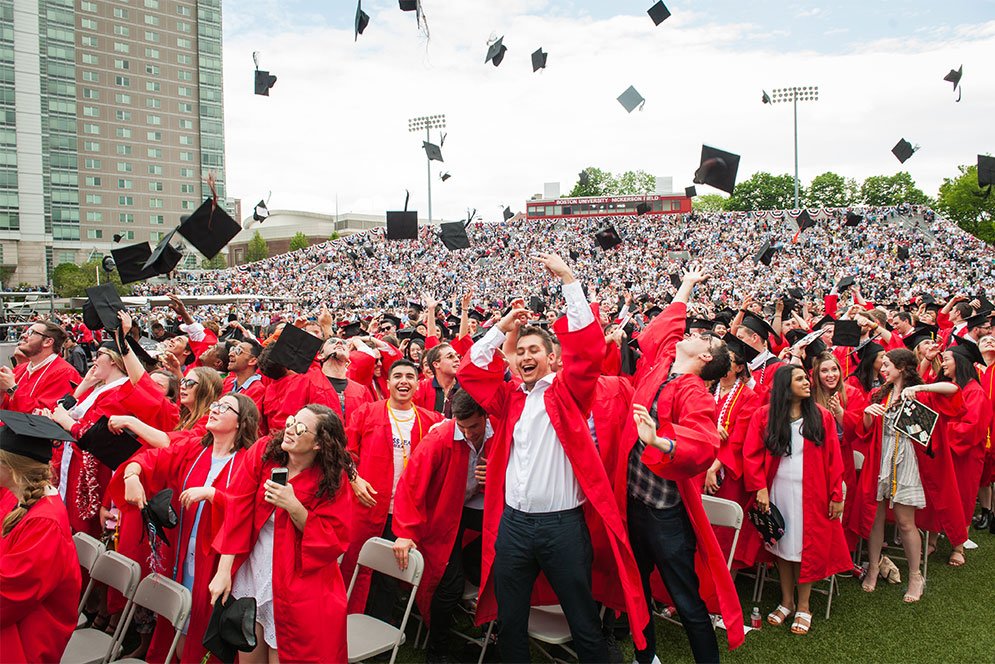 Members of the Class of 2018 celebrate as Sunday’s Commencement ceremony concludes. Photo by Melissa Ostrow