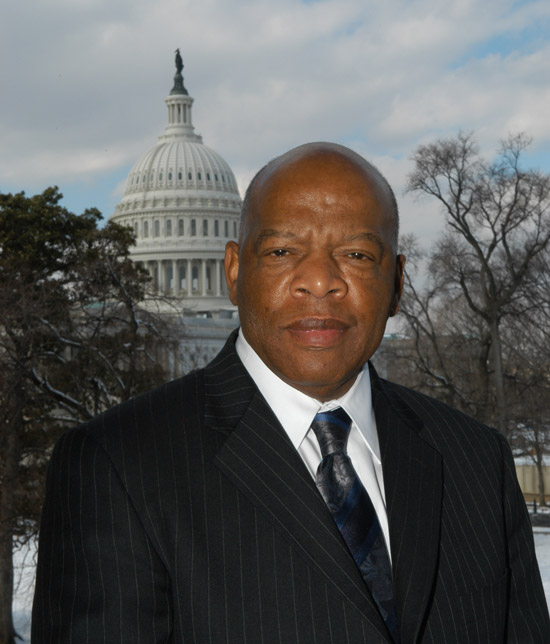 Congressman John Lewis (D.-Ga.) will receive a Doctor of Laws at BU’s 145th Commencement Sunday. Photo courtesy of US House of Representatives

If you had to choose one life to represent the best of America over the last century, John Lewis’ would be a good choice.

Lewis went from childhood poverty in the Jim Crow South to heroism on the frontlines of the Civil Rights Movement and on to the halls of Congress, where as the representative of Georgia’s fifth district since 1987, he’s more than willing to raise a ruckus even today, at age 78, if the cause is just.

As @repjohnlewis on Twitter, his favorite hashtag is #goodtrouble, usually accompanying a black-and-white picture of him at a civil rights protest, once even with a mug shot of his friend and mentor, Rev. Martin Luther King, Jr. (GRS’55, Hon.’59). But Lewis also applies the hashtag to issues, like net neutrality, that didn’t exist in the days of civil rights marches.

“Sometimes you have to get in trouble—good trouble, necessary trouble—to make a way out of no way,” Lewis tweeted back in March.

As Boston University’s 145th Commencement speaker, Lewis should provide plenty for graduates to contemplate on Sunday, May 20, when he will speak and receive an honorary Doctor of Laws.

Born the son of Alabama sharecroppers in 1940, Lewis grew up picking someone else’s cotton in the segregated South. He says he hardly knew a white person. As a teenager in the 1950s, he was inspired by King, who he heard preaching about equal rights on the radio. He hoped to attend Morehouse College, as King had done, but couldn’t afford the tuition, so he attended American Baptist Theological Seminary in Tennessee, where he could pay for his education by working on campus. After graduating, Lewis earned a bachelor’s degree in religion and philosophy from Fisk University, joined protests at whites-only Nashville lunch counters, and formed a lifelong commitment to nonviolence.

Lewis was one of the original 13 Freedom Riders, black and white civil rights protestors who traveled through the South, putting themselves in harm’s way to fight segregation in interstate bus travel. He befriended King and became a leader of the Civil Rights Movement as head of the Student Nonviolent Coordinating Committee. He was beaten and jailed many times.

“Since the people invested government with its authority, we understood that we had to obey the law,” Lewis later wrote. “But when law became suppressive and tyrannical, when human law violated divine principles, we felt it was not only our right, but our duty to disobey.”

Lewis helped organize, and spoke at, the 1963 March on Washington, addressing the huge crowd from the same podium King made his “I Have a Dream” speech from that day. And a cop wielding a billy club fractured his skull on “Bloody Sunday” in Selma, Ala.—March 7, 1965—part of a horrific scene of police attacking marchers as they crossed the Edmund Pettus Bridge. That scene was broadcast on national television and became a turning point for the Civil Rights Movement.

In the 1970s and ’80s, Lewis turned to electoral politics, first as an Atlanta city councilor, then as the congressman from Georgia’s fifth district. He continues to fight for freedom and dignity for all, for a just government and society, and to protect voting rights.

53 years ago today, we were beaten, tear gassed, trampled by horses, and left bloody on the bridge in Selma. On this anniversary, we cannot rest. We must honor those who gave their lives for the right to vote. We must continue to find a way to get in the way. #goodtrouble pic.twitter.com/pryA7cFSM8

On the 50th anniversary of Bloody Sunday, he walked over the Edmund Pettus Bridge again, hand in hand with the nation’s first black president. Barack Obama awarded Lewis the nation’s highest civilian honor, the Presidential Medal of Freedom in 2011. In 2001 Lewis received the only John F. Kennedy Profile in Courage Award for Lifetime Achievement ever granted by the John F. Kennedy Library Foundation.

In 2016, he won the National Book Award for Young People’s Literature for the third of his best-selling graphic novels, March: Book Three, intended to teach young people about the Civil Rights Movement.

“Every generation leaves behind a legacy,” Lewis wrote in Across That Bridge: A Vision for Change and the Future of America (Hachette Books, 2012). “What that legacy will be is determined by the people of that generation. What legacy do you want to leave behind?”