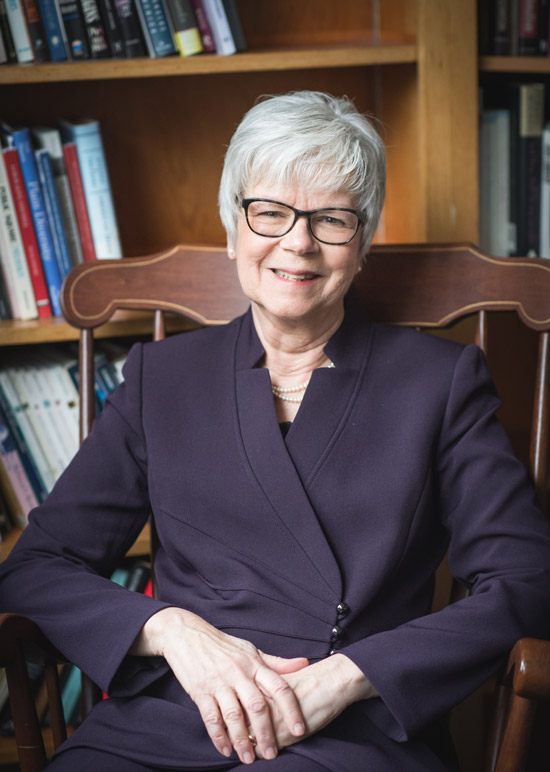 Nancy Ammerman, a CAS and STH professor of sociology of religion, studies religious congregations. She will retire after Commencement.

Biologist and atheist Richard Dawkins wonders whether theologians—at least the kind who study things like Adam and Eve’s original sin, even though Adam and Eve never existed—should get the boot from academia. As a sociologist with a joint appointment at the School of Theology and the College of Arts & Sciences, Nancy Ammerman has spent her career studying both believers in Eden’s couple and those who understand them as allegory.

Ammerman wants you to know two things: she doesn’t take a stand one way or the other on her subjects’ beliefs; she merely studies them. And those who don’t take Genesis as literal history outnumber those who do, highlighting what she calls a common misperception among academics: that people in the pews hold rigid doctrines and “otherworldly” beliefs in an “authoritarian God”—that “religion is about believing without doubt and obeying without question,” she says.

Now, after 15 years on the BU faculty (in addition to being an STH and a CAS professor of sociology of religion, she’s also associate dean of the faculty, social sciences, at CAS), Ammerman is stepping down after Commencement.

“I’m not going away to Florida to lay on the beach,” she says, but will continue advising PhD students and writing.

In the three decades-plus since the newly minted Yale PhD got her first academic job, at Emory University, she has turned her sociologist’s eye on congregations, studying how religion is actually lived. Her feet-on-the-ground expertise involved her in the aftermath of one of the nation’s most notorious and bloody confrontations involving religion.

Following the botched 1993 siege of the religious group Branch Davidians in Waco, Tex., by government agents, the government asked scholars, including Ammerman, to review the episode. Having sought to arrest group leader David Koresh, an apocalyptic Christian whom federal agents believed had illegally stockpiled almost 250 weapons, the government besieged the Davidians’ compound until a fire incinerated the building.

The death toll was heavy: 75 people died, many of them, including a three-year-old, from gunshot, stab, or bludgeon wounds, the FBI said. Each side accused the other of starting the fire; an independent investigation said the blaze was set inside the compound. Ammerman criticized the FBI for not heeding the advice of agents who thought Koresh possibly sincere in his views; talking out his understanding of the Book of Revelation might have ended the standoff nonviolently, she suggested.

Over the course of her career, Ammerman “has mentored several generations of appreciative scholars and religious leaders in the study of lived religion,” says Mary Elizabeth Moore, dean of STH, adding that her congregation studies and recent work on religion’s changing influence “turned her field in fresh directions.”

A “preacher’s kid, ” Ammerman’s dad was a Baptist minister, and she grew up observing congregations, she says. That background helped with her earliest research, studying fundamentalism and how it had split the Southern Baptist Convention in two.

“I knew where to poke, what kinds of questions to ask,” she says. “There’s nothing like actually asking people, talking to them about what they understand to be the case.”

Academic interest in her research field has blossomed over a career that’s spanned Reagan to Trump. In the 1960s and ’70s, Ammerman says, scholars downplayed congregations as stumbling blocks to the era’s liberal church leaders, who were pushing progressive causes like civil rights.

Why did academics get religion, as it were, about studying religion in the pews? In part, because of the powerful influence of money, she says: the Lilly Endowment, which supports religious research, began awarding grants for congregation studies.

In her study of religious congregations, the subject of several of her award-winning books, Ammerman says she’s witnessed two big changes. One is the diversifying of the American religious landscape, as immigrants have seeded the country with Islam, Buddhism, Hinduism, Sikhism, and other religions. The second is the growth of the “nones” (the religiously unaffiliated). Their mushrooming is a response to dismay with both the growing politicization of religion (especially evangelical Christians linking up with the right), she says, and scandals such as the Catholic clergy sex abuse. These developments prompted the rise of self-described spiritual-but-not-religious Americans. But “the bottom line of my research is that they’re probably neither,” she says.

At BU, she participated in a project involving 95 people in Boston and Atlanta with various faith traditions, including about 10 who identified as nones, and 25 who were loosely affiliated with religion. “What we were asking was for people simply to tell us the stories of their everyday lives”—work, health, families, where they lived, and important events and rituals. The researchers listened for whether the subjects described any spiritual content in their lives, as the subjects themselves defined spiritual.

“The people who had active connections to other people—that were also a part of some kind of religiously or spiritually identified community—were people who saw more of their lives in spiritual terms,” she says. But such terms were missing from people “who had no connections to any kind of friendships, conversation partners, small groups, congregations.”

A member of both a Congregationalist and a Presbyterian congregation, Ammerman describes her own beliefs thus: “I would not say that I’m a very good creedal believer. But I do believe in a big story, if you will, about there being a presence that has infused the world with life.

“That’s a benevolent energy that is behind people, that gives energy for people who want to tap into that…to be able to try to make a difference in the world. If I believe in anything for sure, I believe in hope. And hope is a way of articulating that notion that there is something beyond what we see today that gives us the ability to imagine that the world might be better than it is today.”

Two other STH faculty members are retiring at the end of this semester: John Hart, a professor of Christian ethics, and Robert Neville, former dean of STH and a professor of philosophy, religion, and theology, who also has a CAS appointment. The former, Moore says, has had “international influence” through his writings and talks on ecological justice; the latter has shaped scholarly thinking on ethics, cross-cultural philosophy and theology, and metaphysics.

A panel discussion honoring Ammerman will be held Wednesday, April 25, at 5:30 pm, at STH. It will include researchers at other institutions with whom she has worked.

Scholar of Religion Nancy Ammerman to Retire
2
share this