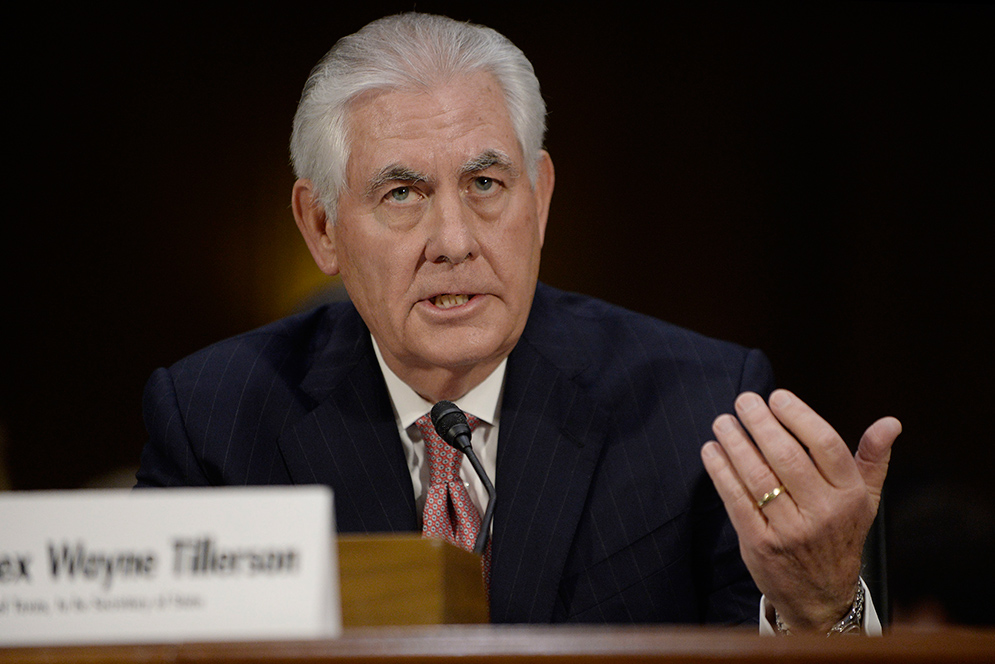 Rex Tillerson, Trump’s nominee for Secretary of State, has close ties with Russia, which concerns both senators who must confirm him and some BU foreign affairs scholars. Photo by Olivier Douliery/ABACA(Sipa via AP Images)

From vowing to pull out of last year’s United Nations Paris Climate Agreement to advocating a thaw with Russia, Donald Trump has promised an about-face on United States foreign policy. His cabinet choices appear to double down on that pledge: a Secretary of State-designate (Rex Tillerson, until recently president and CEO of ExxonMobil) who worries even Republicans about his coziness with Russian President Vladimir Putin, and a nominee for Environmental Protection Agency (EPA) administrator (Scott Pruitt, Oklahoma attorney general) who is considered an ally of the fossil fuel industry and a climate change denier.

Coupled with news of Trump’s aversion to daily intelligence briefings, developments prompted John Woodward, a Frederick S. Pardee School of Global Studies and College of Arts & Sciences professor of the practice of international relations, to tweet a photo of the Maytag TV ad’s repairman with the caption, “CIA’s Briefer to the President-Elect. The loneliest job in the world.”

Woodward’s unease mirrors the concerns sounded by several BU experts over the incoming president’s foreign policy proposals. As Woodward’s colleague, security expert Joseph Wippl, another Pardee and CAS professor of the practice of international relations, puts it, “It is going to be a roller-coaster ride like we, as a country, have never seen before.”

That ride starts with policy toward Russia, says intelligence expert and former CIA officer Woodward. “The president-elect should realize that disinformation and influence operations, or ‘active measures,’ are as Russian as vodka and matryoshka dolls,” he says. “The US intelligence community must investigate and identify Russia’s robust disinformation activities—aimed not only against the US democratic system but increasingly in European and other countries as well.”

“Given Exxon’s business interests in Russia, Mr. Tillerson would be often vulnerable to charges of conflict of interest.”
—Igor Lukes

Tillerson and other cabinet nominees must be confirmed by the Senate. Igor Lukes, a Pardee and CAS professor of history and of international relations, cites wisdom from Proverbs (“a companion of fools suffers harm”) to suggest that Trump dump Tillerson, who “is marred by his dealings with Vladimir Putin.”

He doubts that Tillerson, who received Russia’s Order of Friendship from Putin in 2011, would enforce the Western sanctions imposed on Russia after its 2014 annexation of Crimea. “Furthermore, given Exxon’s business interests in Russia, Mr. Tillerson would be often vulnerable to charges of conflict of interest,” Lukes adds.

Trump’s hoped-for rapprochement with Russia, along with his insistence that NATO allies spend more on defense so the United States can spend less, implies a view “that the major threat facing the United States is radical Islamic terrorism,” says William Keylor, a Pardee and CAS professor of history and of international relations.

“The reset with Russia may enhance Putin’s claim that his intervention in Syria is part of a global war on Islamic terrorism, in which Moscow and Washington will be partners,” says Keylor. In that event, “human rights, civil liberties, representative government, and other values that the United States has stood for and championed throughout the world may well fall by the wayside in the face of this single-minded preoccupation on the part of the new president.”

Given potentially abrupt policy reversals under Trump, the best hope is that Tillerson and James Mattis, his nominee for Secretary of Defense, both strong personalities, “may have the ability to keep President Trump on a short leash,” says Wippl, another former CIA officer.

“Note my emphasis on ‘may,’” he says, adding that Trump’s attitude towards NATO and other statements suggest whiplash-fast policy changes.

Another possible reset is last year’s Paris Climate Agreement. “Trump and his party are clear that they don’t believe climate change is happening or that it is caused by human activity,” says Neta Crawford, a CAS professor of political science. “They don’t want to regulate greenhouse gases and show little desire to promote energy efficiency.…This is tremendously shortsighted, because climate change is an urgent problem, and this stance puts us at odds with most of the rest of the world.”

“The biggest mistake Trump can make in foreign affairs is undoing immediately the Paris climate accord,” agrees Michael Corgan, a Pardee and CAS associate professor of international relations. “This will throw into doubt the reliability of the United States in treaty commitments. Who will want to make a deal with us on anything important?”

EPA pick Pruitt could portend “an unprecedented legal and political assault” on efforts against climate change, says Henrik Selin, a Pardee and CAS associate professor of international relations. The bright side, from his perspective, is the obstacles in the way of such policies.

“The biggest mistake Trump can make in foreign affairs is undoing immediately the Paris climate accord. This will throw into doubt the reliability of the United States in treaty commitments.” —Michael Corgan

“The US Supreme Court has declared carbon dioxide a pollutant under the Clean Air Act,” says Selin. “Any efforts to cancel or weaken existing actions by the Obama administration would be met by immediate legal and political challenges” by states and environmental groups. Meanwhile, other signatory nations to the Paris accord have said they’ll honor that commitment whether the United States does or not, he says.

And our businessman president may face headwinds from business, Selin adds: “Rapidly declining costs in renewable energy generation, and the old age and inefficiency of many US coal-fired power plants, mean that many market forces favor a continuing shift…toward expanded investments in renewables.”

Trump promised another break with the past in dealing with China. He’s advocated a 45 percent tariff on Chinese imports and breached four decades of diplomatic protocol by speaking directly to the president of Taiwan, which China considers a breakaway part of the People’s Republic under its “One China” principle.

“Trump’s China policy, like his domestic policies, is likely to be transactional, unpredictable, and unyielding when Trump is backed into a corner, and flexible when Trump feels in control,” predicts Taiyi Sun, a Pardee lecturer in international relations and political science. Trump’s hint that he may demand Chinese trade concessions in exchange for honoring One China reflects “a serious misunderstanding of China’s core interests.”

The new president’s flexibility on matters less vital to both countries might spur a “less confrontational” relationship on issues like China’s human rights record, Sun says. “However, when core interests are challenged, the unyielding side of Trump might escalate the conflict and may make the situation irreversible since actions and reactions could become extremely unpredictable and unprecedented.”