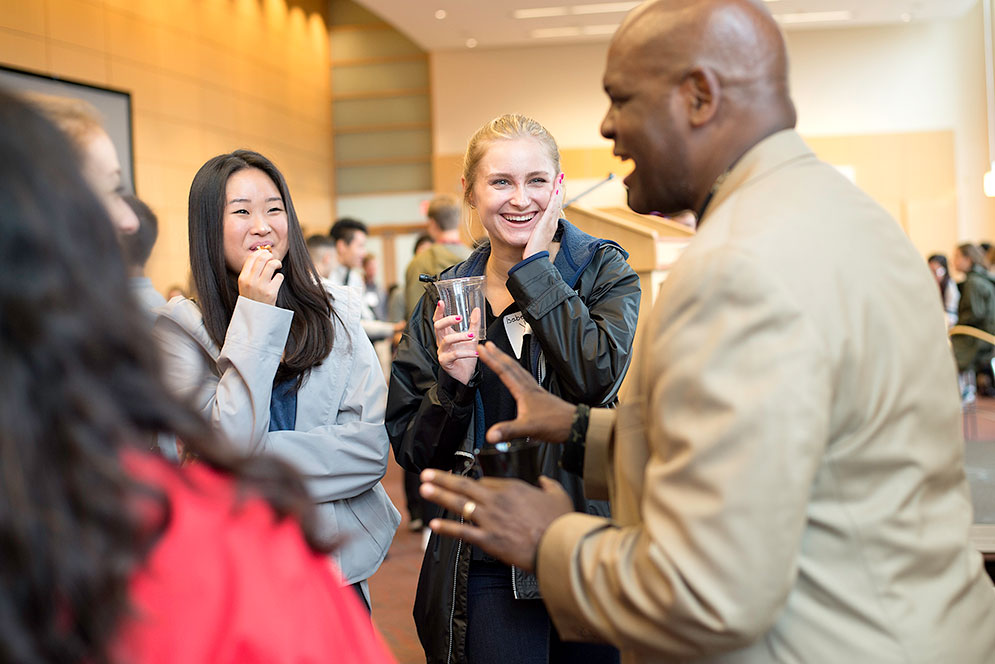 Kyna Xu felt like she wasn’t thriving midway through her freshman year at a New York area school. Her classes, the people she met, and the school’s overall environment just weren’t living up to the college experience she had envisioned. Her mom was aware of her dissatisfaction, and suggested she return to California, enroll in the local community college to avoid falling behind, and figure out her next steps.

Xu (CAS’18) says applying to college for the second time was just as demanding as it had been the first time around. But when she attended the BU transfer orientation, she liked the urban campus and the option to change majors. Now a senior, she feels she made the right decision.

“Transfers are an important stream of students coming in because they add a lot to us,” says Robert A. Brown, president of BU. “They have made a choice that is in many ways more considered than a student who joins us as a freshman. Each has a story about why they came to Boston University, why they’re here today.”

Transfers come to BU for a variety of reasons. Many like BU’s large and diverse student body, its breadth of programs and majors, and its Study Abroad option and research opportunities. Some lacked the credentials to get into BU as a freshman, but worked hard and now have the grades. Others, says Brown, can’t afford four years of private college tuition, but can swing two years.

“They are a diverse group in terms of their own backgrounds and their own experiences,” says Christine McGuire, vice president and associate provost for enrollment and student administration. “They enrich our educational environment. And we try to give them the same experience that any student would have coming through the door.”

For instance, McGuire says, they receive full financial aid consideration and help with housing. They can attend a special orientation program specifically for transfers, and they are advised about which classes to take. Overall, she says, transfers seem happy and perform well—their six-year graduation rate is 1.7 percent higher than that of a typical freshman, with similar retention rates.

Virtually all students interviewed for this story said that at first they felt daunted by the transfer process. After all, they were enrolled in college someplace else and needed to keep up with schoolwork there when they decided to transfer. But they admitted to themselves that they were unhappy, they said, so there was no looking back.

Most begin their (second) college search online, and they find that BU’s Admissions website has a step-by-step guide that walks students through this process and answers some of their most common questions: which programs are open to transfer students (virtually all), application and financial aid information, and how to check which course credits will transfer. Once a student decides to apply, the application receives the same evaluation as a traditional student’s.

McGuire says transfers to BU have high academic credentials, and they average at least a 3.5 college GPA. Broken down, the 2017 incoming transfer group is 15 percent underrepresented minority students (5 percent African American and 10 percent Hispanic), 16 percent Asian American students, 40 percent white students, and 24 percent international students. About 23 percent of transfers are the first in their family to attend a four-year college, compared with 21 percent last year.

Transfer students are also eligible for financial aid; an estimated 47 percent of this year’s incoming transfers received a financial aid package, according to Julie Wickstrom, executive director of financial assistance. BU’s scholarship assurance program guarantees that the aid offered in a student’s first year is continued for each undergraduate year.

Boston public high school graduates who transfer to BU are eligible for the Community Service Award, a grant from BU that fully funds their calculated financial need without loans, with the requirement that they complete 25 hours of community service each semester. This program previously had been limited to incoming freshmen, but was expanded this year to include transfer students who are Boston public high school graduates. Kelly Walter (SED’81), associate vice president and dean of admissions, says that 18 new transfer students were able to take advantage of this funding.

Some transfers say they are intimidated by figuring out how to apply previous college course work towards their BU degree. Transfer credit evaluations are analyzed by the Office of the University Registrar; students submit syllabi for their completed college course work for consideration. It takes time, McGuire says, because courses are individually assessed.

This is time-consuming and requires a lot of effort on the student’s part, says Justin Cipriano (SHA’18). “You have to be willing to sit down and fill out the paperwork and go back to them if you think there’s a mistake,” he says.

“BU seems to get a lot of transfers from Suffolk, where I went, so all of my credits that I expected to transfer did,” says Brian Rollins (CAS’19). “My whole freshman year transferred over.”

Adjusting to life at BU

After the nitty-gritty of applying, transfer students are often anxious about fitting in and making friends. Some connect and ask questions before school even starts on the incoming transfer student Facebook page.

One of the most frequent topics of conversation is housing. The University offers on-campus housing for transfers, and this year, about 540 of them chose BU housing (there are no specific residences or floors designated for transfers). Roommate assignments are random, and usually, but not always, transfers end up rooming with continuing students, says Marc Robillard, executive director for Auxiliary Services.

Some schools and colleges offer transfer-specific resources, like the College of Engineering Transfer-Student Resources and Advising Community (TRAC), while others employ specialized advisors who help with credits and course selection. The College of Arts & Sciences First Year Experience program, an optional one-credit class open to all BU first-year students, has a special section for transfer students that aims to build community among classmates. The class filled its 17 spots before the start of school.

Many transfers form lasting friendships at the orientation session held specifically for them, which is similar to the one offered to freshmen. Orientation director Shiney James (CAS’99) says the transfer session “feels very different because everyone in the room has done college somewhere before. We change our team of orientation staff and presenters to demonstrate that we value and respect the transfer students’ expertise.”

At a reception held immediately after this year’s Matriculation September 3, about 100 transfer students gathered in Agganis Arena’s Burke Club Room and listened to Brown welcome them to the BU community. “You have an enormous opportunity in front of you that I know you grasp, because as I talk to transfer students, I understand that they make these choices in a much more considered way,” he said. “Many of you have chosen to come to BU because you have a specific passion, usually around a profession, and you see us as a place that’s really good in it. Pursue that passion with as much zeal as you can, but don’t put blinders on. You can take classes across the different schools and colleges and be involved in different activities.”

Brittany Steinfeld (SAR’19), who came from a school in Delaware, says she upgraded to BU for the more challenging academics as well the opportunity to join the swim team. “It was easier to transfer than I thought it would be,” she says.

Jordi Quevedo-Valls (CAS’20) previously attended a state school in Florida, where he completed his core requirements. He is pursuing a combined bachelor’s and master’s in economics, and hopes to someday hold a political office.

Justice Douglas (CAS’18) transferred to BU in fall 2016 from Tyler Junior College in Texas, about 30 miles from the Louisiana border. The philosophy major with entrepreneurial aspirations is currently teaching himself programming. As a child, Douglas was diagnosed as developmentally delayed, with speech issues and impaired fine motor skills. He attracted the attention of local news stations before coming to BU after setting up a GoFundMe page to pay for the last of his BU tuition.

While the money helped, Douglas had other reasons to come North. “I felt like Texas wasn’t where the world was, and I wanted to go where it was all happening,” he says. “And I soon found that BU has a really strong and vibrant transfer community.”

Thinking about transferring to BU? Read more about the process here.

There are 3 comments on Transfers Welcomed to BU