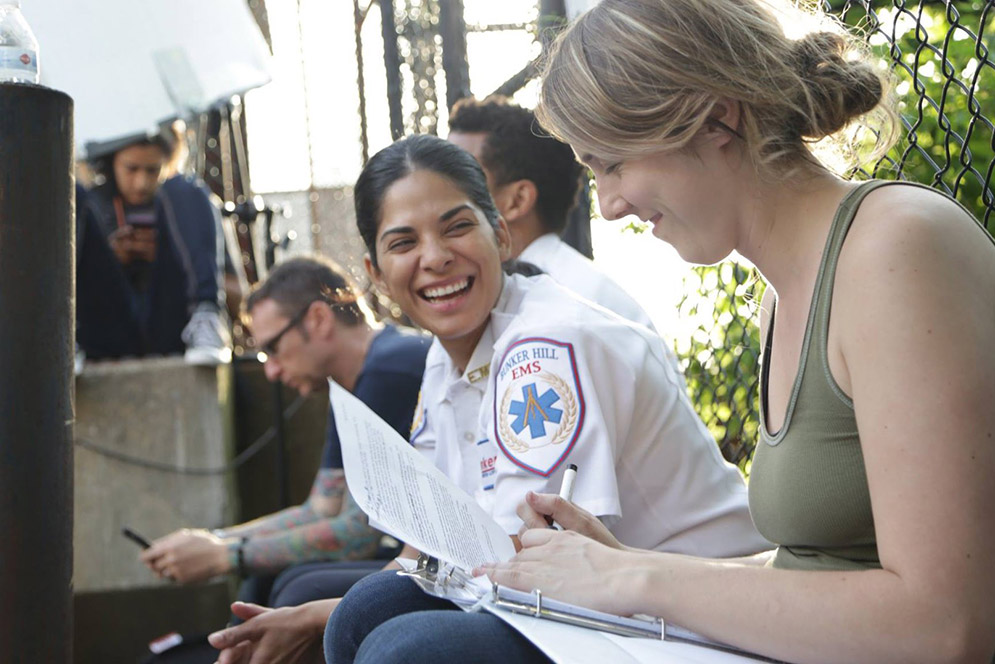 One student filmmaker rode with Boston paramedics to research her main character’s life. Another used digital effects to convert campus corridors into the set for a sci-fi thriller. A third took a comic idea about the inflatable figures you see dancing outside car dealerships and turned it into a touching live-action family drama.

Their films are among the six nominated for best picture at the 37th annual Redstone Film Festival, being held tonight, Friday, March 31, at the Tsai Performance Center.

The six films will be screened at the festival, which shows outstanding work by College of Communication filmmakers and screenwriters. The event, sponsored by media mogul Sumner Redstone (Hon.’94), is free and open to the public, but the 500 seats fill quickly, so arriving early is recommended.

“There are a lot of students who’ve won or been a finalist and have gone on to careers as producers, directors or writers,” says Paul Schneider, a COM professor of the practice of television and film and department chair. “It’s a leg up.”

In the video above, view trailers for the six short films competing for the top prize in the Redstone Film Festival.

After the screenings, first-, second-, and third-place awards for best film will be given out, along with awards for best cinematography, best screenplay, best editing, and best sound design. This year’s nominees all say that while it would be great to win and possibly make career connections, the biggest reward is seeing how a large audience reacts to their work.

The films were originally created for a COM film, television, or video production class or as a graduate thesis project. Some of the filmmakers are previous Redstone finalists or winners and some are recent graduates. Most worked behind the scenes on one another’s films.

“It’s a very important thing for them going forward to learn how to collaborate,” says Schneider. “The partnerships that get formed early on can turn into something really important later.”

This year’s festival finalists for best picture are:

Sheehan’s gritty Borderline focuses on urban paramedic Esme, tautly played by Herlin Navarro, who is trapped by her mother’s drug addiction. “I am interested in both the impact of addiction on men and women and what it’s like to have a relationship with someone who’s an addict,” says Sheehan, now a COM adjunct faculty member. “I’m also interested in female vulnerability and struggling to be open and vulnerable and self-aware. This film is very much about Esme getting a hint of self-awareness.” Sheehan took third place last year for her film Adaptation, and third place in 2015 for her film After.

Kiyak’s film Instincts is set in the near future. A man suffering from memory loss wakes up in a corporate research facility, where he can’t trust anyone. “The inspiration came from one of my friends. We were talking about how fast technology is developing. The future is now, basically,” Kiyak says. He filmed at the Photonics Center and elsewhere on campus, and added a futuristic gloss with visual effects. “We came up with a logo for this company, Bora Tech, that exists in our movie and put it on all the walls.”

Jason grappled with the central story of his entry, Lipstick Stains, for a long time. “What happens in the film is basically what happened in my life when I was a junior in high school,” he says. “I remember going and seeing my grandmother and not knowing she was really sick, and then feeling really bad after, because I was just being a lousy grandson.” He wrote a prose piece about the experience that became part of his BU application and later the backbone of his movie. He’s applying for grants in hope of turning his short into a feature film.

Torres’ Over His Dead Body is about an aspiring singer hoping to reconnect with her family at her father’s funeral. “It’s based on a true story, my grandmother’s story,” he says. “She wanted to be a singer, but she was never able to pursue her dream.” His grandmother was taken out of school in seventh grade in Puerto Rico and sent to work in a sweatshop. “Young people who want to pursue the arts, even if they go to college and study film or painting or literature, their family is very worried they’ll be broke,” Torres says. “That’s my boat as well. Even though my family loves the arts, they know I’m struggling. A lot of students will identify with my film, because it’s a struggle we all have.”

The filmmaker began his project, Overdue, with the question, “What is love?” “That’s pretty much a question that everyone is going to have a different perspective on,” he says. The story is about a guy who is “not very nuanced in romantic ways; he’s kind of a shut-in in the library,” then he discovers that love isn’t necessarily like what he’s read about in novels. “I think I’m similar to the main character in that I have these ideas about love, like everybody does,” Moots says. “But it’s really a trip when you realize what love actually is.”

Palmer and his writing partner, Luke Shields (COM’14), started with the idea of making a film about “Romeo and Juliet with inflatable tube people at rival car washes across the highway, but like all our projects, it evolved massively,” he says. Their finished film, Pick Your Own, is a sweet family tale about a young tween girl (the excellent Maddie Tyler) living on a blueberry farm, who has to adjust when her widowed father begins dating. One of Palmer’s professors urged him to lessen his dependence on dialogue, and he took the advice to heart: the film has no dialogue at all. Good thing, because the tube people are still part of the story, and the motors that kept the air dancers inflated were so loud that on-set sound recording was impossible. Palmer won the top prize at last year’s Redstone Festival for his film You Are Here.

Prizes for the top winners include Canon cameras and accessories, Avid and ProTools software, and MacBook Pro computers.

The winners of the annual Fleder-Rosenberg short screenplay contest, sponsored by two former Redstone winners, director Gary Fleder (COM’85) and screenwriter Scott Rosenberg (COM’85), will also be announced at tonight’s festival. The contest has three prizes: $1,500 to the first prize winner, $1,000 to the second prize winner, and $750 to the third prize winner.

The 37th annual Redstone Film Festival is tonight, Friday, March 31, at 7 p.m., at the Tsai Performance Center, 685 Commonwealth Ave. The event is free and open to the public; the festival draws a full house so arriving early is best. Tickets are available at the box office starting at 5:30 p.m. BU Today will publish a story about this year’s winners on Tuesday, April 4.

The Boston Redstone Film Festival is followed by a Redstone Festival in Los Angeles on April 13, where the top three Boston films will be screened.