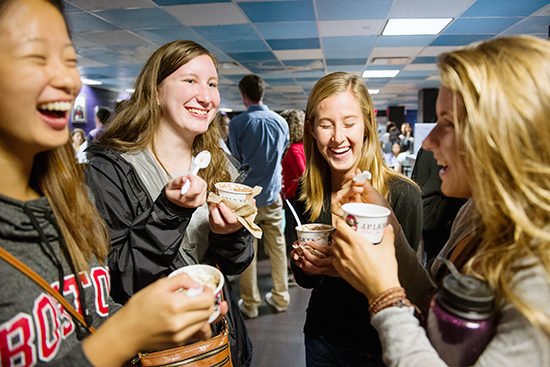 The fall equinox is around the corner and classes begin Tuesday, but the Labor Day weekend offers plenty of opportunities to explore BU and Boston with old and new friends while it still feels like summertime (and the living is easy). From campus events like a drive-in movie on the BU Beach and an ice cream social to museum exhibitions and a fireworks display over Boston Harbor, the three-day weekend offers lots of activities and events.

BU Today has compiled a guide so you won’t miss out on any of the fun.

If you love folk music and discovering new talent, stop by Harvard Square’s Club Passim in this weekend, when the famous music club hosts its annual Labor Day campfire festival, a four-day extravaganza of music by 80 artists. Performers will collaborate, swap tunes, encourage audience participation, and create an intimate atmosphere that will remind you of sitting around a campfire, singing with just a guitar and your closest friends. It kicks off tonight with performances by 14 artists, some well-known, others up-and-coming.

Summer may be winding down, but you can still get a taste of it at the Institute of Contemporary Art’s First Fridays: Beach Party tonight. The evening includes live music by Boston-based synthpop band Bearstronaut as well as a DJ playing beach tunes on the museum’s waterfront plaza, which will be decorated in beach décor, and a cash bar. Free tacos from Loco Taqueria & Oyster Bar will be available. Explore the galleries and the current exhibitions, such as In Search of Vanished Blood by Nalini Malani, one of India’s foremost artists, a multimedia installation inspired by East German writer Christa Wolf’s 1984 novel Cassandra, and First Light: A Decade of Collecting at the ICA, commemorating the ICA’s first decade after moving to the waterfront in 2006.

First Friday at the MFA

The Museum of Fine Arts also hosts special events on the First Friday of every month. Patrons can discuss and view art while enjoying cocktails, tapas, and live music. Admission to the museum is included in the price, so visit the current special exhibition, Della Robbia: Sculpting with Color in Renaissance Florence, featuring about 50 works by one of Renaissance Italy’s most gifted family of sculptors and running through December 4.

The Museum of Fine Arts, 465 Huntington Ave., Boston, First Friday event is tonight from 6 to 9:30 p.m. Find ticket info here. Food and alcohol can be purchased at this 21+ event (valid ID with proof of age required).

Screening of Star Trek (2009) at the Boston Harbor Hotel

Boston Harbor Hotel’s Summer in the City series offers free outdoor entertainment every Tuesday through Friday throughout the season. Its Friday night Movies by Moonlight shows popular Hollywood films and cult classics. Tonight, it’s Star Trek, a 2009 reboot of the classic 1960s TV series. The space-fantasy flick, starring Chris Pine, Zachary Quinto, Leonard Nimoy (Hon.’12), and Zoe Saldana, follows Captain Kirk and crew as they battle to save Earth from an artificial black hole. You can purchase a cocktail or appetizers and entrees from the Rowes Wharf Sea Grille.

Movies by Moonlight at the Boston Harbor Hotel, 70 Rowes Wharf, Boston, begins at dusk and is free and open to the public.

Stop by BU Central tonight for BU’s annual Ice Cream Social, hosted by Student Activities as part of its annual Weeks of Welcome 2016. It’s a great way to get to know new classmates while snagging a free dessert. Ice cream will be provided by Boston favorite J.P. Licks, with an extensive menu of flavors, like salty caramel, fresh peach, and sangria sorbet, as well as gluten-free and dairy-free options.

The Ice Cream Social is tonight from 9 to 11 p.m. at BU Central in the George Sherman Union, 775 Comm Ave.

Since 2010, Magnificent Bastard Productions has delighted audiences by reinventing William Shakespeare’s work on stages across the UK as well as in Austin, Tex., and Cambridge, Mass. Their productions, called Sh*t-Faced Shakespeare, achieve a decided raucousness by inserting an inebriated actor into each performance. Their witty, frequently raunchy adaptations of Shakespeare’s most famous plays are interactive and promise a good time. Saturday the troupe presents Romeo and Juliet at OBERON in Harvard Square.

Sh*t-Faced Shakespeare: Romeo and Juliet is at OBERON, A.R.T.’s second stage, 2 Arrow St., Cambridge, at 7:30 p.m. Tickets range from $15 to $25. No outside food or beverage is allowed, but the theater has a full bar.

Nothing says summer like a drive-in movie. So head over to the BU Beach where Student Activities presents Captain America: Civil War, whose star-studded cast includes Chris Evans as Steve Rogers/Captain America, Robert Downey, Jr., as Tony Stark/Iron Man, Scarlett Johansson as the Black Widow, and Jeremy Renner as Hawkeye. Released earlier this year, it was a box office success and to date is the highest grossing film of 2016. It follows the fallout after a disagreement over the oversight of the Avengers splits them into two groups, one led by Captain America, the other by Iron Man. As an added incentive, Kenmore Square’s Insomnia Cookies will provide free treats, so grab a friend and a blanket, sit back, and watch superheroes duke it out under the stars.

Want to make sure you end your summer with a bang, not a whimper? Head to the Boston waterfront Saturday night to catch a dazzling fireworks display. Sponsored by Summer on the Waterfront, the pyrotechnics are launched from barges anchored off Boston’s North End and the Seaport District. For the best views, go to Christopher Columbus Park or Long Wharf in the North End or Fan Pier Park in the Seaport District. Or watch while dining at one of the restaurants along the waterfront. Don’t feel like mixing with the crowds? You can catch the show on TV; New England Cable News will broadcast the show live beginning at 8:30 p.m.

The fireworks display over Boston Harbor begins at 9 p.m.

If you’ve just moved into a new apartment or dorm, chances are you could use a few knick-knacks or some fresh flowers or produce. You’ll find it all and more at the popular SoWa Open Market, each Sunday from early May through late October in Boston’s South End. You can purchase art for your walls, clothing, jewelry, fresh produce, and specialty foods like jams, sauces, and baked goods. Food trucks serve items from tacos to ice cream. The one-stop shopping market draws thousands each week. SoWa is also home to Boston’s only weekly beer and wine garden, which serves up a rotating selection of craft brews, cider, and wine, and is kid- and dog-friendly.

Not Your Grandma’s Bingo

One of the most popular events during Student Activities annual Weeks of Welcome, is the aptly named Not Your Grandma’s Bingo, a fun-filled event offering big prizes, crazy challenges, and free pizza courtesy of Domino’s. And don’t worry, no grandmothers will be on hand.

Not Your Grandma’s Bingo is in the Metcalf Ballroom, GSU second floor, 771 Comm Ave, at 10 p.m.

Boston is full of world-class art museums and none more breathtaking—and more idiosyncratic—than the Isabella Stewart Gardner Museum in the Fenway. The collection of 2,500 paintings, sculptures, tapestries, and other works of art—collected by Gardner in the late-19th and early-20th centuries—is housed in a 15th-century-style Venetian palace. Monday, visitors receive free admission during the museum’s annual Frank Hatch Day, named for Francis “Frank” Hatch, a former museum trustee and supporter of Boston arts and culture. You’ll see works by Botticelli, della Robbia, van Dyck, Whistler, and many more, all housed in galleries off of the museum’s breathtaking interior courtyard.

Free timed tickets will be available at the Isabella Stewart Gardner Museum, 25 Evans Way, on Monday, September 5, from 11 a.m. to 4 p.m. Entry is on a first-come, first-served basis, and tickets are timed for entry every 30 minutes. Tickets will be distributed until capacity is reached, so getting there early is recommended.

The Berklee School of Music hosts more than 200 free concerts throughout greater Boston each summer as part of its annual Summer in the City series. Monday’s performance is by current Berklee student and jazz musician Zahili Gonzalez Zamora, whose unique style, a fusion of Cuban music, bebop, funk, and soul, has earned an international reputation. The classically trained pianist will perform at noon on the Boston Common. Unwind with some food and a picnic blanket and discover Zamora’s distinct sound for yourself.

Berklee School of Music’s Summer in the City series presents Zahili Gonzalez Zamora at noon at the Boston Common’s Brewer Fountain Plaza; free and open to the public.

Head over to Nickerson Field and cheer for the women’s soccer Terriers when they take on the University of Cincinnati Bearcats. The BU women have captured the Patriot League championship each of the past three years and have been picked by the league to take the conference crown again this year. Gates open at 5 p.m. for the 10th annual Terrier Tailgate, the official kickoff to BU Athletics 2016–2017 season, featuring free food, games, and prizes. Last year a record crowd of more than 7,000 enjoyed the festivities, so best to arrive early.

The First Lutheran Church in Boston hosts its annual Labor Day Concert and Root Beer Float Reception, with Baroque solo and chamber music from Germany, England, and Italy, including suites for traverso and cello by Johann Sebastian Bach and a rarely performed duet by English Renaissance and Baroque composer Richard Dering.

The annual Labor Day concert at the First Lutheran Church, 229 Berkeley St., begins at 7 p.m. A Root Beer Float Reception in the church courtyard follows. Tickets are $10 and can be purchased at the door. Take any MBTA Green Line trolley to Arlington.

Jaws, the 1975 Oscar-winning film about a man-eating great white shark, remains one of Hollywood’s greatest summer blockbusters. When it was first released, the film not only broke box office records, but also led to a drop in attendance at beaches across the country, as spooked beachgoers stayed away. Directed by Steven Spielberg (Hon.’09), Jaws stars Roy Scheider, Robert Shaw, and Richard Dreyfuss. To celebrate the unofficial end of summer, the Coolidge Corner Theatre screens the Hollywood nail-biter as part of its Big Screen Classics series. With a haunting score by Oscar-winner John Williams (Hon.’85), a terrifyingly convincing mechanical shark, and plenty of fake blood, Jaws will have you sitting on the edge of your seat. So grab some popcorn, sit back (if you can), and enjoy.