“The whole world is watching and cheering from the sidelines as millennials—the generation of which you are a part—step onto the world stage with the energy and desire to transform local, national, and global society,” said BU trustee Andrea Taylor (COM’68) at the College of Communication Convocation on Friday, May 13.

In her address to the College of Communication Class of 2016, BU trustee Andrea Taylor challenged the graduates to look way in the future and decide what they want their legacy to be.

The president and CEO of the Birmingham Civil Rights Institute, Taylor spoke at the school’s undergraduate Convocation on Friday. “Today…we gaze into a crystal ball and envision your journey over the next half century to the year 2066,” she postulated. “It may sound like a long time from now, but take it from me—and I have the gray hair to prove it—it will be here before you know it. No one knows at the beginning of life’s journey what lies ahead, but everyone leaves a legacy, whether planned or not.”

Taylor (COM’68) said that when she graduated almost 50 years ago, she never could have imagined that she would one day return to address the school’s graduates.

“You obtained many memories here, including the tragedy of the Boston Marathon bombings, just as the class of 1968 remembers the assassination of Martin Luther King, Jr. (GRS’55, Hon.’59),” said Taylor, whose 15-minute speech in front of a crowd of 2,000 recounted how several members of her African American family overcame numerous challenges to earn a BU degree and go on to extraordinary careers. “We learn from these experiences and move on to make a better world,” she said.

After earning a bachelor’s degree in journalism at COM and starting her career as a reporter for the Boston Globe, Taylor was a producer and on-air host for local PBS affiliate WGBH-TV. She later became the founding director of the Media Fund at the Ford Foundation, managing $50 million in support of global media projects, including Sesame Street in China and South Africa, award-winning television series such as Eyes on the Prize and The Pacific Century, and National Public Radio. In 2006, she was appointed director of North America community affairs for Microsoft Corporation. She also served as a delegate to four United Nations global summits. She received the 2008 Distinguished Alumni Award from COM, and was appointed a BU trustee in 2009.

Taylor’s parents, sister, two uncles, her former husband, a nephew, and several cousins are BU grads, and since 1935, 9 family members have earned 10 graduate and undergraduate degrees at BU, in law, art, music, violin, history, and communication. By sharing her family history, Taylor said, she hoped to inspire the newly minted COM graduates, who are “beneficiaries of a world-class education that allows you to compete and return back to your communities,” noting that that is what her family did. 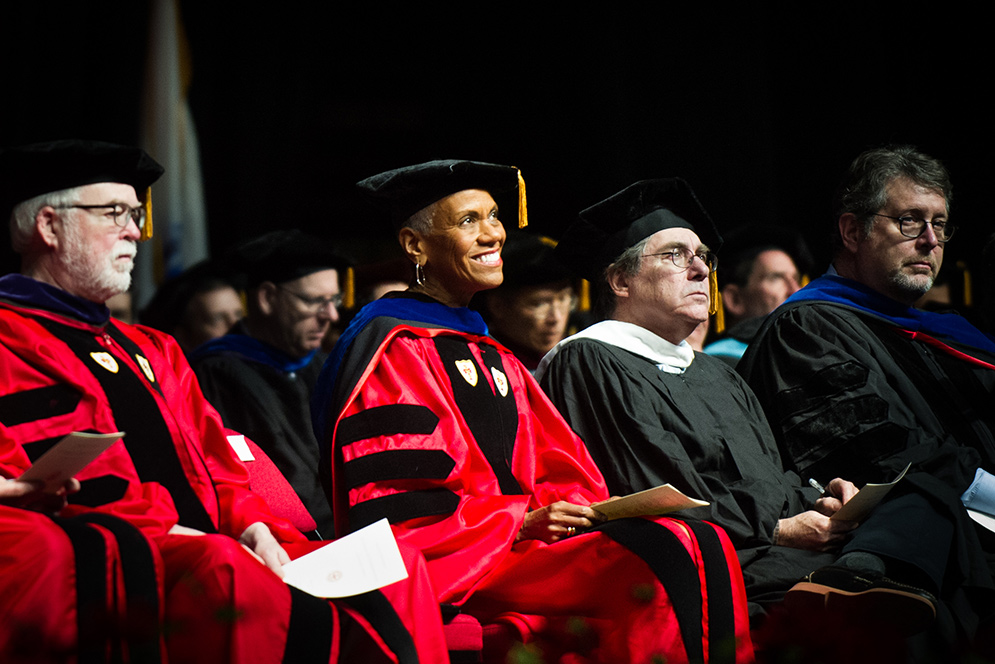 In his introduction of Taylor, COM Dean Thomas Fielder (COM’71) told the crowd that she had much to teach them.

She told the audience that her uncle and her parents enrolled at a time when segregation and racism made it necessary for them to travel north to receive an education, since many southern states denied African Americans admission to white colleges. Ironically, many returned to the South after they graduated, she said, “to fight for economic and social justice, which transformed their communities and improved the quality of life for everyone.” Her mother, Della Brown Taylor Hardman (CFA’45), the granddaughter of slaves, eventually became a professor and chair of the art department at West Virginia State University. Her papers are archived in the Howard Gotlieb Archival Research Center.

Taylor’s current job at the Birmingham Civil Rights Institute has made her even more aware of the “importance of legacy from the institutional to the individual perspective,” she said, “and the value of preserving history and reinterpreting the lessons of the past to promote future civil and human rights efforts in the United States and worldwide.”

The world continues to evolve in dramatic ways, she said, and the need for innovative solutions, knowledge, communications, and better human relations at the local, national, and global levels has never been greater. “Society always looks to young people to lead the way, to be instructors, to challenge authority, to bring forth new ideas that will transform,” she said.

In this era of Facebook, Instagram, and Twitter, she urged graduates, take some downtime, because “there are infinite issues clamoring for attention—health and wellness, poverty, infrastructure, just to name a few.” Those who take the time to understand what is happening will be the ones to chart new paths for others to follow. “What you choose to do with this amazing gift of a Boston University education is hanging in the balance, and I ask that you leave today with the willingness to consider the action, commit to, and achieve your personal and professional goals,” she said.

“You have unlimited potential. The whole world is watching and cheering from the sidelines as millennials—the generation of which you are a part—step onto the world stage with the energy and desire to transform local, national, and global society. Remember, defining and stamping your legacy begins now. As communicators, use your voices wisely. We are listening.”

“What Do You Want Your Legacy to Be?”

“What Do You Want Your Legacy to Be?”
0
share this