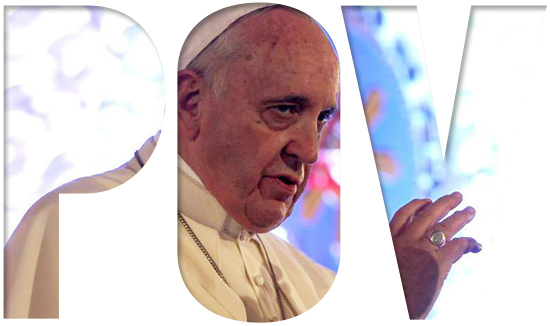 For too long, ideologues, deniers, and vested interests have prevented an appropriate, righteous response to the grave dangers of climate change. Now, the administrator of the US Environmental Protection Agency, Gina McCarthy, has a retort to those who still question if climate change is real: is the Pope Catholic? Pope Francis, through his recent 184-page encyclical on the environment, speaks in a strong voice about the seriousness of humans altering natural systems. All people, irrespective of their personal faith (as well as agnostics and staunch atheists), should reflect on the pope’s fundamental message.

The Catholic Church has a checkered past when it comes to embracing new scientific arguments, especially those that are seen to challenge deeply held beliefs (see Galileo’s work on the heliocentric solar system model). But Pope Francis takes a position right in the middle of the scientific community when he describes the basic drivers and consequences of human-induced climate change. On this issue, members of the Pontifical Academy of Sciences, including world-renowned Nobel laureates and climate scientists such as Mario Molina, Hans Joachim Schellnhuber, and Veerabhadran Ramanathan, guided the pope. The Vatican is debating whether to divest from fossil fuel companies.

However, the most critical part of the encyclical is not on science; it is the very powerful case for seeing climate change as an urgent moral issue. Pope Francis echoes the concerns of others when he argues that it is the world’s poorest and most vulnerable who are mostly starting to bear the brunt of the costs associated with a changing climate, and that will only increase. As true as this is, it is a perspective that is woefully neglected in many global and national political debates, which remain narrowly centered on limiting the costs of cutting emissions and how to pass on responsibilities and obligations to others.

Any meaningful response to climate change must involve government action in the name of the common good, coordinated across national borders. Governments have the authority to formulate economic and energy policy and set environmental and human health standards. Unfortunately, what we have seen so far in preparations for the major climate change conference in Paris in December indicates that the outcome of that meeting will fall far short of what is needed—not preventing climate change (which is already happening), but even meaningfully reducing human suffering and ecological damage.

Pope Francis highlights that climate change is an economic, social, and environmental issue that permeates all societal levels and sectors. Climate change’s moral and practical dimensions, for both current and future generations in the context of growing inequalities, call for a variety of responses and initiatives. Many of us who live relatively affluent lives are reluctant to take a hard and self-critical look at our own consumerist lifestyles, but Pope Francis implores us to do just that. He correctly argues that we have nothing if we destroy the ecological basis of the planet that we inhabit in the name of wasteful production and consumption in our “throwaway culture.”

Francis reminds us that as we reduce poverty and other human sufferings, a “development first, environment second” mind-set is no longer possible (if it ever was). With a globally growing middle class and population, increased conservation and use of renewable resources only grow in importance. Such a change offers opportunities for the design of much more desirable and inclusive ways of organizing our societies. Here, Pope Francis offers a meaningful caution that technology alone cannot save us (though some of the encyclical’s misgivings about using modern technologies and economic incentives to drive behavior are misplaced).

Pope Francis’ forceful language that fossil fuel use “needs to be progressively replaced without delay” draws attention to larger energy discussions, including the divestment debates gaining momentum on campuses and among major financial managers. As university leaders, students, and faculty consider this symbolically and existentially important issue, the pope’s message of compassion is clear; we have an individual and collective responsibility to ask what kind of world we want for ourselves and for those who come after us, and we must act accordingly.

Do we possess the courage to take necessary steps on climate change?

Henrik Selin, a Pardee School of Global Studies associate professor of international relations, is the author of European Union and Environmental Governance (Routledge, 2015) and Global Governance of Hazardous Chemicals: Challenges of Multilevel Management (MIT Press, 2010). He can be reached at selin@bu.edu.

There are 20 comments on POV: Making Climate Change a Moral Issue