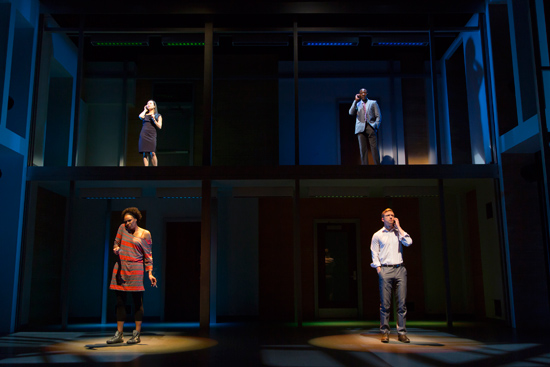 Smart People  is the final production of the Huntington Theatre Company’s 2013-2014 season and runs through June 29 at the Calderwood Pavilion at the Boston Center for the Arts. The play was inspired by a scholarly paper about research into the possible genetic hardwiring of racial stereotyping. Of the four characters—smart people all—two, actress Valerie (2010-12 Huntington Fellow Miranda Craigwell) and surgical intern Jackson (McKinley Belcher III), are African American. Brian (Roderick Hill), a Harvard neuropsychiatry professor, is white, and Ginny (Eunice Wong), a Harvard psychology professor, is Chinese-Japanese American. None believes him- or herself to be racist, but the matter is, as the playwright reminds us, far more complicated than we like to assume. “With barbed wit, Diamond explores the inescapable nature of racism and other tricky topics in this controversial and fiercely funny new play,” says Huntington artistic director Peter Dubois, the play’s director.

BU Today spoke with Diamond about the evolution of her play, the myth of a post-racial society, and how her youthful indignation is becoming increasingly softened by empathy and the sense that the problem is vastly complicated.

BU Today: Tell us about how the idea for Smart People came to you.

Diamond: The genesis was a paper by Susan Fiske, a neuropsychologist at Princeton University, who studies the roots of stereotyping based on race, gender, and age. My husband, a sociologist, happened upon the article and said, “You may want to look at this.” It kind of jolted me and made me think, how are people in the sciences looking at race, and what would be the ramifications of that line of inquiry? I started to see that across disciplines, studies about race aggressively worked to talk around race; I imagine because it’s such a powder keg.

Is there anyone who navigates the world without racial biases?

I don’t think so. I think it’s just always there, and not necessarily biologically, as my play posits. We have been raised in a culture that is racist. We navigate it, but don’t always acknowledge it for our own sanity, and so that we don’t feel implicated. So it kind of sits there and festers. It’s hard for me to imagine that people who can see are capable of not seeing race, and that’s across the board—it’s not just white people. It’s who we are, and the way our brains categorize. But to offer something slightly more optimistic, I would imagine there will be generations of people coming up who will have a different paradigm and reality that informs how they perceive race, and how they interact in the world.

How important to bringing about this evolution is having a conversation about race?

Certainly we’re ill equipped to have the conversation. We feel implicated, hurt, or marginalized because of it. But it’s important not to be afraid to talk about it, and to acknowledge that we may not be okay. I don’t think we’re good at that.

Would the discovery that racism and bias against the “other” is hardwired let anyone off the hook? Would it complicate matters?

I think the reason I wrote the play, and what I find most compelling, is that I don’t know. I don’t think there’s a right or a wrong answer. It’s like the splitting of atoms; I suspect that a good case could be made on either side, for good or for bad. My protagonist’s case is, if we could know and acknowledge that we have a biological predilection for bias, perhaps it would be easier to address it. I’d like to think that the play sees both sides of the argument. I don’t have a hugely strong opinion. Race is always murky.

You set the play at the time of the Obama campaign. What did that campaign and its outcome mean to you, and how did it alter the conversation about racism and racial disparities in America?

I was in the middle of writing this play when Obama was elected. I had already decided that Smart People would own the discomfort of racism in a way that I hadn’t done before, even though my plays have always explored race, gender, and sexuality. This is my play about race. David Mamet has one, why not me? For a long time I was someone who sat on panels and talked about race in America. I’d become rather lazy in thinking I knew how to talk about it, that I got it. There was a bit of hubris in that; my sense that if I just talked about it articulately enough, people would see that I was right. Obama’s election changed the rules. I have a very strong opinion that there’s no such thing as post-racial. And while his election marks a huge milestone, it didn’t, in one fell swoop, deliver the country from its entrenched racial divide. It did ask us to be more sophisticated around how we talk about race and the way we see it. It challenged and forced me to be at my best around acknowledging all the ways in which it’s extremely complicated and profoundly important.

Is it possible for any of us to know how it feels to be in someone else’s skin? How much of the experience of being black or Asian—from everyday exchanges to outright discrimination—do even the most liberal white Americans not get?

As I’ve gotten older I’ve softened a little around assuming right away that white people absolutely can’t get it. I don’t think we can know what it’s like to walk around in someone else’s skin, especially when we talk about microaggressions, about wading through a day of microaggressions as a person of color. Still, I think that as human beings, we have a great capacity for empathy. Yes, you can never exactly understand what it feels like to be somebody else, and how, say, a financially privileged, physically attractive black man might navigate the world in contrast to how an overweight, underprivileged white woman might. We can’t know, and yes, it’s problematic.

Going through parts of Dorchester and Roxbury, anyone can see that poor neighborhoods remain largely African American and Hispanic, yet many white people believe equal opportunity has been achieved. What fuels this delusion about racial equality?

I think it comes from the notion that if we work hard enough, we can have financial viability. To acknowledge financial and racial disparity means questioning the very foundations of our American identity and how we move through the world. I also think that in a very real way, people who make money off of people who don’t have as much tend to buy into the fiction that people who are poor are deserving of it. That fallacy gets perpetuated through movies and television.

Can you comment on the notion of white guilt?

I don’t have a lot of patience for guilt in whatever hue it comes, because I don’t think it’s very productive. I think that Brian sees himself as not motivated so much by guilt, but by a desire to make things better. There’s that moment when he says to his girlfriend, who’s Asian American, “You made me look like the patriarchal asshole that I am.” Guilt is too easy a default.

Humor figures prominently in Smart People. What is its importance in talking about race?

Of course people have been asking me a lot about humor in my work. I like that things come out funny when I write them, and I think humor is more important than I’ve been giving it credit for. In a very deliberate way, I use humor to disarm, so we’re open to hearing the parts we don’t want to hear, so we have a little space to let in the things that hurt. I want my play to promote a conversation, and humor is always a good way to start. I am also a firm believer that an evening at the theater should be entertaining, and humor, without treating things frivolously, is one way that I know how to do that.

How important is a level of acceptance and/or fatalism in choosing one’s battles in the face of so-called microaggressions?

I was trying to articulate this to somebody in an artistic conversation, trying to articulate how a camera might pick up race. That camera would move across a room and a situation and take it all in, sometimes dismissing it, sometimes drilling down into it, sometimes confronting it. When the taxi doesn’t pick you up, you see it happen, but why would you take on these moments emotionally? There are those moments when you choose not to be hurt. I’m very aware of the way my own defense and coping mechanisms have shifted as I’ve gotten older. I have always been calibrated on high to racialize things, because my mother lived through the trauma of segregation. But as I’ve gotten older, I’ve worked to shift my lens. It’s less hurtful to not see it that way all the time. There are people who move through the world with a self-defensive anger, and I was that person for a long time. But now I choose my battles, and challenge myself to see a more complicated perspective. And still, yes…racism hurts, and I clock in real time, and acknowledge that it is a constant dynamic navigating through the world as a person of color.

How is this reflected in your play?

Playwriting should honor the complexity of human behavior. Aspects of my life that are not directly affected by race have humbled me as I’ve got older, so I’m less inclined to think that I know what any dynamic is. I’m writing now from a place that questions. The play speaks to the nuances and contradictions of life, love, and ambition, seen through the lens of race.

Are you resigned to the reality that Boston theatergoers remain disproportionately white? What can be done to change that?

Theater audiences are strikingly not diverse in so many ways—generationally, economically, and racially. It’s something the Huntington continues to address, quite actively and intelligently. Like so many cultural institutions in Boston, the Huntington has a very faithful and long-standing audience, which happens to be mostly white. That’s changing, and I find that exciting. It’s complicated. I also think there’s a very human desire to see oneself affirmed by being on stage; audiences are more diverse when performances are more inclusive. Five years ago I railed against the lack of diversity in the American theater, and I still do. But I see more clearly how we’re structurally stuck. There has to be an overhaul of what we think theater is, how institutions perpetuate racism in hiring, programming, and fundraising. How the theater community acknowledges its own elitism. Mostly, I appeal to people of every hue to come to my play, because it’s a good night at the theater. I promise.

The Huntington Theatre Company’s production of Smart People runs at the Calderwood Pavilion at the Boston Center for the Arts, 527 Tremont St., Boston, through June 29, 2014. Tickets may be purchased online, by phone at 617-266-0800, or in person at the BU Theatre box office, 264 Huntington Ave., or the Calderwood box office. Patrons 35 and younger may purchase $25 tickets (ID required) for any production, and there is a $5 discount for seniors. Military personnel can purchase tickets for $15, and student tickets are also available for $15. Members of the BU community get $10 off (ID required). Call 617-266-0800 for more information. Follow the Huntington Theatre Company on Twitter at @huntington.