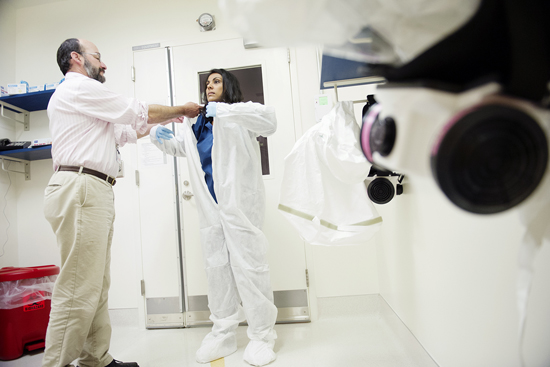 Nahid Bhadeliain (right) in protective gear with Dr. Guillermo Madico, at the National Emerging Infectious Diseases Laboratory in Boston, where she directs infection control. This equipment is slated to be donated to the Ebola-fighting efforts in Sierra Leone when she travels there in mid-August. Photos by Jackie Ricciardi

If all goes as planned, Dr. Nahid Bhadelia will soon head straight into the heart of the Ebola outbreak that has already killed more than 800 people in western Africa, including at least 50 health care workers. Global and US health authorities announced Thursday that they would ramp up efforts to bring the epidemic under control, but that it would likely take at least three to six months.

Bhadelia is director of infection control at Boston University’s National Emerging Infectious Diseases Laboratory, an assistant professor of infectious disease at BU School of Medicine, and an associate hospital epidemiologist at Boston Medical Center. With funding provided by the World Health Organization (WHO), she’s slated to travel to Sierra Leone in mid-August, to share her expertise on infection control and also care directly for Ebola patients. We spoke about the growing crisis.

WBUR’s CommonHealth: This is the biggest Ebola outbreak ever, as far as we know. Is it notable in other ways?

This is the first time Ebola has been present in these three countries: Sierra Leone, Guinea, and Liberia. Because these countries haven’t seen the infection before, that impacted their ability to recognize and manage the infection early on.

Also, because of the recent travel of the American Patrick Sawyer to Lagos [where he died of Ebola], I think it has raised a lot more concern about transfer of Ebola abroad, which has not been much of an issue in the past.

A lot of the US media coverage has focused on, “Could it come here?” Part of that fear seems to stem from the sense that Ebola, with its hemorrhages and high death rate, is particularly horrible. Is it?

In some ways yes and in others no. Ebola Zaire, the strain we’re seeing right now, is one of the most deadly strains; it’s been shown in the past to have 90 percent mortality when no treatment is given. But in some ways, it’s much harder to transmit at a population level compared to respiratory viruses we’ve been hearing about such as SARS or MERS. It requires close contact with bodily fluids. So, for example, there’s been a lot of concern about travel of folks from the areas impacted to the developed world, and I think the reason it’s less likely to spread is because it’s limited to people who come into contact very closely with the person who’s impacted.

So many health care workers have been getting infected. Do you have a sense of why? Are there practices that might be easily correctable that you could have an impact on?

There are a lot of talented people there in the field already, not just from international organizations but people who’ve been working there a very long time. In Sierra Leone, for example, though they haven’t had Ebola before, they’ve dealt with Lassa fever, another viral disease that causes hemorrhagic fever, at Kenema—one of the places where Dr. Sheik Umar Khan, the leading physician who just died of Ebola, worked. That center has dealt with Lassa fever for over 25 years, and there are nurses there who have long experience. The issue is the amount of patients. You have nurses there who were taking care of maybe a dozen Lassa patients and now they have to see 70 Ebola patients. I think the major issue is the fact that the health care system is so overwhelmed.

Also, we understand that the virus can be transmitted from surfaces—so if someone comes into contact with bodily fluids with the virus in them on a surface, that’s another way to get it. The virus can live outside the host for a couple of days. So this contamination of the environment is another important component—and that’s very difficult if you can imagine 70 patients in a small space. Ebola is not hard to kill, so it’s easy to avoid contamination in general. It’s only because of the number of people and poor health infrastructure that it becomes difficult. 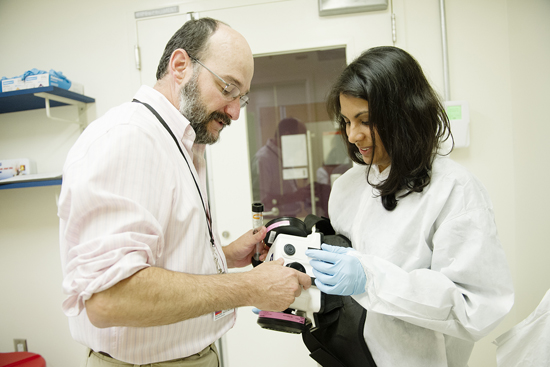 Still, it’s so baffling that these leading, incredibly knowledgeable doctors are getting infected. How can that happen?

The number of patients plays a major role, and the lack of resources is a major concern. Also, here, when we train people to take care of patients with highly communicable infections, specifically Ebola and other hemorrhagic fevers, we always say that you can’t be in that heavy protective equipment for more than a short amount of time, and you can’t be on shift for more than four hours. And that’s with one patient, maybe. Now you have docs who are taking care of 40 patients and they’re doing it in seven-hour shifts or even longer. That could definitely contribute to infection among health care workers.

What’s it like to wear that protective equipment? Can it be compared to space suits?

What’s currently being used in the field is a full-body gown, masks, face shields, head covers, double gloves, and then rubber boots with covering booties over them.

All this material is a barrier to any transmission of any fluids, but a lot of times it also, as you can imagine, blocks air exchange and it can get extremely hot, especially given the heat in the countries that we’re talking about. I’ve read accounts from some of the folks who are down there, and you can get very dehydrated; you can lose a lot of your body fluids from being in that protective equipment for a long time.

Is there any new technology that you could bring that could help?

It’s not so much the need for more advanced equipment as much as just needing the proper amount of the equipment they already have down there.

In the US, we have equipment—the space suit you mentioned—which is basically the powered air-purifying respirators—what we call PAPRs—and that’s the headgear you see with the air filter attached to it. The issue with that is, A, it’s expensive—though it would be ideal to get it down there—and B, it requires electricity, and in the field it can be difficult to have a reliable source of electricity.

Do you feel confident that when you go to Sierra Leone, you’ll be able to avoid getting infected?

I think you’re asking me if I’m afraid at all. Yes, I have fears for my safety, I think it would be cavalier not to have a healthy amount of fear, but it’s that fear that drives us to be careful and to follow the protocols. I have extensive training and I have a background in infectious disease and particularly with these pathogens.

I’m reminded of the Hillel quotation, “If not me, then who, and if not now, then when?” The need is great. The health care workers are overwhelmed, and more help can make it safer for everyone involved. I think we all face risks when we walk out in the morning… 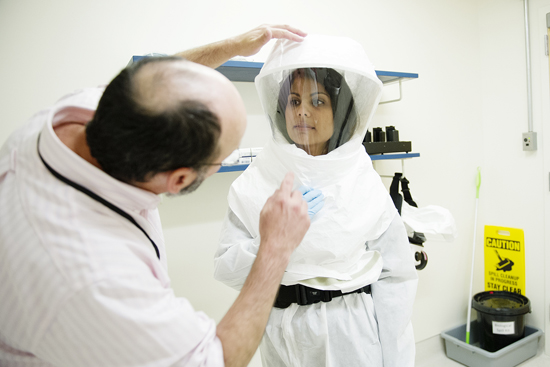 Right, but then there are those of us who regularly face risk at work: Firemen leave the station knowing they could get hurt. Police officers patrol the streets knowing there might be a violent altercation. Even regular doctors go to work knowing they’re at risk for exposure to blood-borne pathogens and multi-drug-resistant organisms. But I think it’s very rare that we’re asked to give something back based exactly on our skills and knowledge, and I think I can contribute, and that’s why I’m going.

I also feel strongly about going in order to bring clinical acumen home with me stateside. Although doctors in the US are taught about Ebola, not many of us have seen patients with viral hemorrhagic fevers. The National Emerging Infectious Diseases Laboratory (NEIDL) plans to conduct research with virulent pathogens, including Ebola, and my job is to run the medical response program in the very, very unlikely event of an exposure. My experience in Sierra Leone will allow me to pass along on-the-ground expertise to health care providers locally at Boston Medical Center.

You have those skills and that knowledge. What can other people do?

We can contribute to education and awareness about this infection and what’s real versus what’s irrational fear—in terms of how this virus is transmitted and why it’s a big issue there and less likely to be an issue here.

Two aid workers, Kent Brantley and Nancy Writebol, were infected down there, and usually health care workers are “extracted” and brought home for care, but their extraction was delayed because countries were not allowing the government to fly them through their air space. That’s irrational fear.

Another way would be personal protective equipment: it’s very much needed and I understand the issue is just getting it into the countries and getting it distributed. Those who have the ability to contribute that, that’s a powerful way to help.

And if you’re a health care worker who has experience in caring for patients such as these, or who has training in biosafety procedures, you can volunteer…

So is this Ebola outbreak the shape of the future, somehow?

What comes to my mind is the T. H. Huxley quote: “The question of questions for mankind, the problem that underlies all others, and is more deeply interesting than any other, is the ascertainment of the place which man occupies in Nature, and of his relation to the universe of things.” Huxley was a biologist—he spoke at the time when Darwin was presenting his theory of evolution—and now there are more than 7 billion of us seeing to find balance with our surroundings.

Since 1970, we’ve seen the discovery of over 40 infectious diseases that impact humans. As we become a larger population, we encroach into ecologies we haven’t previously explored; we come into contact with endemic animals and this allows the pathogens to make a cross-species exchange more easily. So if the past 20 or 30 years are any indication, I think this may become more of an issue in the future.

A version of this story was originally published on WBUR’s CommonHealth blog on August 1, 2014.

Carey Goldberg is the cohost of WBUR’s CommonHealth.  She can be reached at careyg@comcast.net.

Battling Ebola: Heading Into the Outbreak

There is 1 comment on Battling Ebola: Heading Into the Outbreak