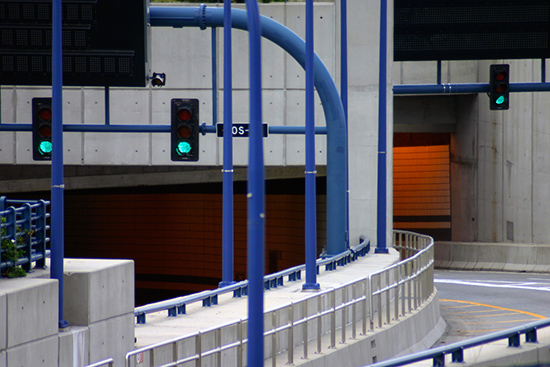 Boston could benefit from “smart” traffic lights moving traffic efficiently, safer bike paths, and other improved services that BU is hoping to develop through a new online platform. Photo by Rob Colonna

BU faculty, with help from business and government partners, will develop cloud computing–based services and products to solve urban problems ranging from traffic congestion to dirty air with a grant from the National Science Foundation (NSF).

The effort, called SCOPE (Smart-city Cloud-based Open Platform & Ecosystem), will be coordinated by the Hariri Institute for Computing and Computational Science & Engineering and led by faculty investigators from several disciplines—computer science, electrical and computer engineering, earth and environment, strategy and innovation, and city planning and urban affairs. The NSF has funded SCOPE with a three-year, $850,000 grant. With contributions from the partners, its total budget exceeds $1 million.

SCOPE principal investigator Azer Bestavros, a College of Arts & Sciences computer science professor and the Hariri Institute’s founding director, says BU and its SCOPE partners—an array of Massachusetts businesses, city and state agencies, and planning groups—could have their first products available within the grant’s three-year life. A product or service could be offered for free or for a price, depending on which partner—business, public agency, or university—is offering it.

The NSF is banking on SCOPE to solve problems, Bestavros says. “Why is it that there is incredible technology developed in universities and industry, but it doesn’t find its way to everyday use by the average citizen?” he asks. “You want to go get a driver’s license or renew it, but it’s a pain. Or services like snowplowing and picking up kids from school are not coordinated—you end up with a plow behind a school bus.” Collaboration among businesses, municipalities, and academia—the “ecosystem” in SCOPE’s name—leverages each group’s incentives to improve those services, Bestavros says. Businesses might make a profit, academics find a platform for their research, and cities provide smarter services.

The products and services offered through SCOPE’s platform will be available via the Massachusetts Open Cloud (MOC), the uniquely designed cloud run by BU and partners at the Massachusetts Green High-Performance Computing Center in Holyoke, Mass. In cloud computing, users rent remotely located computational power and services.

Several BU research projects exemplify the kinds of services that SCOPE hopes to offer to municipalities. Christos Cassandras, a College of Engineering professor of electrical and computer engineering, is researching “smart” traffic lights, which would sense when there’s no cross-street traffic and stay green for motorists on a main thoroughfare.

Lucy Hutyra, a CAS assistant professor of earth and environment, is researching improved ways to measure the mileage racked up by all private motor vehicles in Boston, now measured by live traffic cameras and underground sensors. But current technology doesn’t record vehicle miles traveled with the precision necessary to reduce carbon dioxide emissions from traffic, a goal of the city’s government. So Hutyra is developing an online data portal and a visualization system for recording miles traveled along specific blocks and neighborhoods in real time.

Evimaria Terzi, a CAS associate professor of computer science, has examined better ways to tap data from multiple sources to map bike routes for the city of Pittsburgh. She’s also using multisource data to schedule public works projects and map the safest optimal routes for various types of vehicles, research that could be applied to Boston through SCOPE.

All of these projects involve traffic flow, and that’s no coincidence, Bestavros says. “Studying and mitigating traffic congestion is one of the top areas of interest,” he says, for both researchers and public agencies.

Linda Grosser (GSM’14), director of program and project management at the Hariri Institute, says the project’s industrial and public sector partners are a key advantage of SCOPE’s organization.

“Often, research just never leaves the lab,” she says. “It was an imperative that there are industrial partners at the table,” since the NSF’s purpose is to ensure that anything SCOPE develops is adopted beyond the lab. Business partners will “help do the job of carrying it out into the marketplace.”

While SCOPE’s products and services will be offered through the MOC, Grosser says the University is the sole academic partner running SCOPE. The partners are all based in Massachusetts, but any municipality would be able to use SCOPE’s template to develop its own locally relevant services, she says.

SCOPE’s ability to muster multiple academic disciplines at BU is also key, she says: “It’s not a common project to have a computer scientist, an engineer, an urban affairs expert, and an environmental scientist all really working collaboratively.”