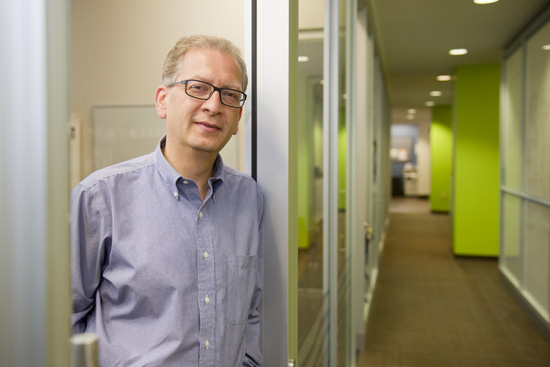 Data scientists use mathematical models to analyze voluminous data and draw knowledge from it that can be used in a variety of applications, from health care and business to design and communications. The University provost’s faculty hiring initiative aims to bolster BU’s ranks in a burgeoning field and also to advance the University’s focus on interdisciplinary research.

“It’s not like we don’t do data science. But we don’t have enough data science scholars to address the need for data science by lots of other disciplines,” says Azer Bestavros, director of BU’s Rafik B. Hariri Institute for Computing and Computational Science & Engineering. Current data science is done by handfuls of professors in “small islands of collaborations,” he says, “two or three faculty working together.…We need to do a lot more.”

Bestavros, a College of Arts & Sciences computer science professor, leads a committee appointed by Jean Morrison, BU provost, to recruit and hire the data scientists. Those scientists will receive a primary appointment in one of three departments: CAS computer science, CAS mathematics and statistics, or College of Engineering electrical and computer engineering. But they may have joint appointments in other schools, he says.

“Data science incorporates varying elements and builds on techniques and theories from many basic engineering and science fields, and is thus closely tied to many of our existing disciplines,” Morrison says. “Boston University has considerable strength in, and substantial commitment to, the important interdisciplinary areas that comprise data science.”

She stresses that the new faculty “will augment, not replace, ongoing faculty hiring in data-science-related disciplines through the regular hiring processes” in BU’s various schools. “These new faculty members will join the strong cohort of faculty we already have in data science, and will have an opportunity to shape Boston University’s vision for research and education in this strategically important area.”

Many scholars use and manipulate data, so what’s new about data science? “What’s new is…there’s a lot of it,” says Bestavros, “and because there’s a lot of it, you cannot do a spreadsheet anymore.” The other change is the multiple sources of data. “With data science, data is coming from lots of sources that were never packaged together before,” he says. “Now, we will do that.”

Data science “is not computer science, and it is not any other traditional discipline we have,” according to Bestavros. “It is truly interdisciplinary. It’s a convener of many disciplines to target application domains that have a ton of data in them.” BU’s new hires “may be a computer scientist. It could be a statistician. It could be a systems engineer.”

President Robert A. Brown cited the data science initiative in his recent State of the University message: “As Boston University continues to emerge as a top private research university, we must continue to build excellence in our foundational programs and focus on bringing together faculty members from across the University.”

BU Expanding Its Ranks of Data Scientists
0
share this