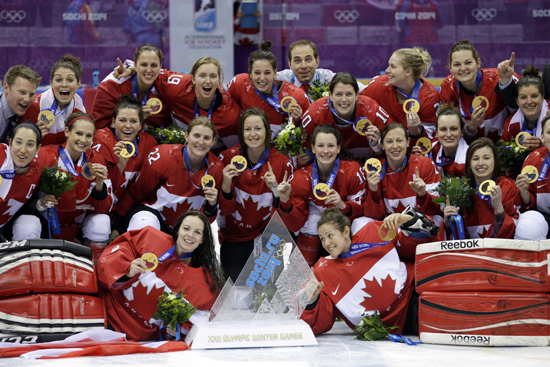 If the 2014 Winter Olympics handed out medals for Most Valuable Player, it’s safe to say that Marie-Philip Poulin would have snagged one. With just 54.6 seconds left in regulation in the US-Canada women’s ice hockey gold medal game last Thursday, Poulin (SED’15) tied it at 2-2, then scored the game-winning overtime goal just a few minutes later. Those two goals brought Canada back from the brink of defeat to beat Team USA 3-2 and scoop up the gold.

It was the second time in just four years that Quebec native Poulin earned a gold medal as part of Team Canada. In the 2010 Winter Olympics in Vancouver, she scored both goals during Canada’s 2-0 gold medal round win over the United States.

At 22, Poulin is not only one of the youngest players on the team, but has scored four of the last five goals for her country in gold medal games.

“It looked like the United States had it in hand, and then one of those small miracles happened,” says BU women’s hockey head coach Brian Durocher (SED’78). “When it went to overtime, Poulin got another chance to be the hero, and I’m not surprised she delivered.”

Poulin was joined on the medal podium by Terrier alums Catherine Ward (GSM’12), Jenn Wakefield (CAS’12), and Tara Watchorn (CAS’12), all of whom played a vital role in Canada’s undefeated run in Sochi. It was also Ward’s second gold medal—like Poulin, she played for Team Canada four years ago. For Wakefield and Watchorn, Sochi was their first Olympic appearance and medal win.

Poulin had taken a yearlong hiatus from Boston University to train for the 2014 Olympics and plans to return for her final year of Terrier eligibility in the fall. She set a program record for assists while leading the Terriers to the Frozen Four during the 2012–13 season.

BU women’s hockey captain and fellow Canadian Louise Warren (SAR’14), who has played with all four of this year’s gold medal-winning Terriers, says she was elated watching her current and former teammates help secure Canada’s comeback. “They’ve done so much for this program and for Team Canada,” she says, “and Marie-Philip getting the two big goals was amazing. Everyone around here was really excited when it happened.”

“Her teammates were running up and down the halls and cheering during the game,” says Durocher. “And that’s just another example of what she means to the players. She’s the consummate team player, a highly respected leader, and her return will be fantastic for the program.”

The two-time gold medalist doesn’t plan to rest on her laurels. Poulin now has her sights set on another goal: leading BU to a Frozen Four title. The Terriers have lost in the national championship game twice during Poulin’s three years of eligibility, and she told USA Today that returning to that stage is now her top priority.

BU women’s hockey wrapped up the regular season with a 21-12-1 overall record, and finished second in Hockey East at 14-7. BU will host Providence in the first round of the Hockey East tournament at 3 p.m. on Saturday, March 1, at Walter Brown Arena, 285 Babcock St. Tickets are $6 for the general public, $4 for students, faculty, staff, children, and senior citizens. Poulin plans to rejoin the team for the 2014–15 season.

There are 5 comments on Basking in Olympic Gold