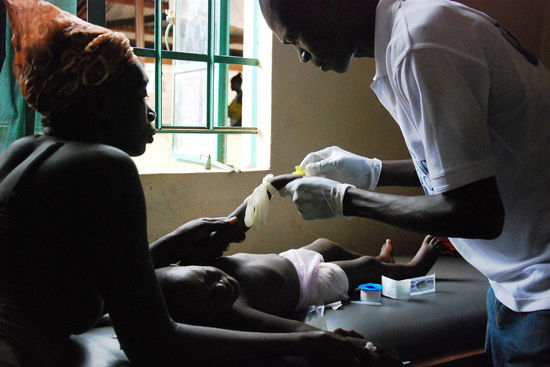 This two-year-old’s life was threatened by severe diarrhea before he received rehydration treatment from a community health officer in Sierra Leone. Diarrhea and pneumonia claimed the lives of two million children worldwide in 2011. Photo courtesy of UK Department for International Development

What would it cost to prevent the vast majority of children’s deaths from pneumonia and diarrhea? About $6.7 billion over the next 12 years—to put it in perspective, that’s less than a quarter of the cost of the 2012 London Olympics. Pneumonia and diarrhea claimed the lives of two million children worldwide in 2011.

The BU School of Public Health is part of a consortium of research institutions that has unveiled a strategy to end all preventable child deaths from pneumonia and diarrhea by 2035—a plan that researchers say is achievable with existing medicine, a modest international investment, and strong leadership.

In a series of articles published today in the medical journal The Lancet, leading academics and public health professionals lay out an action plan they say could offer “an unprecedented opportunity to eliminate preventable child deaths” caused by these two diseases.

Among their findings are that vaccinations, zinc supplementation, promoting breast feeding, and a dozen other key interventions could prevent the vast majority of deaths from pneumonia and diarrhea. The researchers say that despite the “huge global impact” of the two illnesses, they remain low on the list of worldwide health priorities; near the top are diseases such as HIV/AIDS and malaria.

“Our failure to get any traction on this issue is entirely due to political will,” says Christopher Gill, an SPH associate professor of international health and a BU Center for Global Health & Development researcher, lead author of one of the five Lancet articles. “It’s not that we don’t know how to do it or that we don’t have the tools. We hope that the series will be a call to action that encourages someone to take up the charge and own this…to make it a priority.”

The publication of the consortium’s work coincides with the release of the Global Action Plan for the Prevention and Control of Pneumonia and Diarrhoea, a UNICEF and World Health Organization (WHO) publication that provides a guide for governments and their partners to plan integrated approaches for the prevention of pneumonia and diarrhea.

Together, diarrhea and pneumonia—regarded as relatively minor illnesses for most people in high-income countries—are the leading causes of death worldwide for children under age five. They account for about 29 percent of all childhood deaths, with the highest mortality among children under two years old.

The research consortium, led by Professor Zulfiqar Bhutta of Aga Khan University in Pakistan, has determined that sub-Saharan Africa and Southeast Asia experience the highest burden of the two diseases, with nearly three quarters (74 percent) of the deaths occurring in just 15 countries. Although mortality rates from the two are falling in most areas, some countries are still experiencing increasing numbers of annual deaths, including Afghanistan, the Democratic Republic of Congo, Cameroon, Chad, and Mali.

While diarrhea and pneumonia have different symptoms and causes, the researchers note, several risk factors for the two are the same, including undernutrition, suboptimal breast feeding, and zinc deficiency—all of which could be “effectively prevented and treated as part of a coordinated program.” The authors estimate that nearly a third of episodes of severe diarrhea could be prevented by widespread vaccinations against rotavirus and cholera, and up to two-thirds of pneumonia deaths could be prevented by vaccines.

In the paper led by the BU team, Gill and coauthors from the WHO, UNICEF, and the Clinton Foundation Health Access Initiative identified key barriers to better efforts to reduce pneumonia and diarrhea mortality. In convening experts from seven countries, they found that most public health practitioners believe the diseases are considered low on the list of worldwide priorities—far below HIV/AIDS or malaria.

Gill says that part of the problem is a lack of advocacy around the two diseases. “At some point,” he says, “we decided that children should not be allowed to die of AIDS—we said it, and we did something about it. HIV/AIDS benefited tremendously from passionate advocacy by celebrities” and investments by donors. But with pneumonia and diarrhea, “it feels like we’ve just sort of accepted that this is the way things are.”

Other barriers are inadequate training and support for health workers, poor national coordination, and sporadic availability of key commodities. For example, barely half of children with severe acute pneumonia receive antibiotics, only a third of children with acute diarrhea receive oral rehydration salts, and less than one percent of those with diarrhea receive zinc supplements.

The authors suggest that one reason many of the barriers remain, despite these being “solvable” problems, is that recent child-survival investments in low- and middle-income countries have favored technically sophisticated, expensive solutions targeting specific pathogens, instead of broader-based investments in health care systems.

“The solutions to reducing childhood pneumonia and diarrhea deaths are well within our capacity” if they become priorities, the research team says.

Gill says it’s “shockingly bad” that just one percent of diarrhea cases globally are treated with zinc, and that if the same kind of investments in prevention and treatment were made as with other diseases, deaths caused by dehydration could easily be prevented.

“How are we saying this problem isn’t solvable, when it is?” he asks. “Look at HIV/AIDS—it’s much more expensive to manage, the drugs are incredibly complicated….It’s two orders of complexity up from giving kids zinc and some salt water.”

The work in The Lancet series was supported by a grant from the Bill & Melinda Gates Foundation to Aga Khan University and through it to collaborating universities and institutions, including SPH, the Johns Hopkins Bloomberg School of Public Health, and the Programme for Global Paediatric Research at the Hospital for Sick Children (SickKids), Toronto.

Keeping Two Million Children from Dying Each Year
0
share this