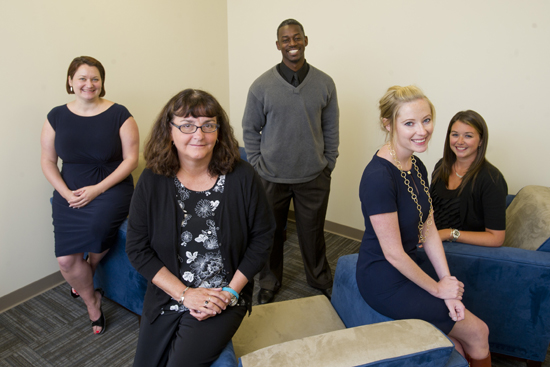 When spring semester ended, BU students left a campus buffeted by allegations that star athletes had committed sexual assaults, that frat brothers had lashed pledges, and that someone was taking pictures of women in residence hall shower stalls. This fall, they returned to a campus with the newly established Sexual Assault Response & Prevention (SARP) Center, staffed with professionals trained to help victims of interpersonal violence and to educate the University community about assault prevention.

The center, at 930 Commonwealth Ave., has three full-time crisis counselors, two of whom used to have offices at Student Health Services, a health and prevention educator, and an administrative coordinator.

Director Maureen Mahoney, a BU crisis intervention counselor for the past 18 years, says the new center is there to “help students realize that they don’t have to go through a horrible situation by themselves.” It also strives to prevent horrible situations, Mahoney says, in part by creating a stronger sense of community. “I think that makes it really difficult for people to purposely harm another person,” she says, “when the other person is seen as part of your community as opposed to an object or an ‘other.’”

The good news about the bad news of last semester is that it prompted students from the Center for Gender, Sexuality, and Activism (CGSA) to write to President Robert A. Brown proposing a new center with prevention services, crisis counselors, and bystander training for campus leaders.

The president’s response came in a campus-wide email in late April announcing the new center. “We are committed to working to ensure that our academic community is one in which uncivil, violent, or abusive treatment of others is not tolerated,” wrote Brown, “and that we have the appropriate means in place both to reduce the likelihood of such events and to provide strong support to those affected when, despite our best efforts, such events occur.”

The Boston University Police Department says it has received no reports of sexual assault from April through late September this year. According to the BUPD, 11 reports were received in calendar year 2011, and 6 in the first four months of 2012.

Mahoney and the two other crisis intervention counselors, Beth Kozik and Jessica Sparks, are first responders for all types of interpersonal violence—including sexual assault, domestic violence, and hazing—as well as for traumatic events like fires, accidents, and deaths. Their job is to make sure students understand their rights and choices, to advocate on behalf of students, to help them get medical care, and to provide counseling or referrals to outside community resources, such as the Boston Area Rape Crisis Center.

“The most vital thing that we do is give students good, accurate information to help them make decisions,” Mahoney says. “For students who’ve been sexually assaulted, it’s a time that any type of control has been taken away from them. It’s really important to give those students back control.”

It’s also important for survivors to find a neutral ear. “Often,” says Mahoney, “students will say that we are the only people they’ve told who truly don’t have an opinion about what they do.”

The center’s doors are open Monday through Friday from 9 a.m. to 5 p.m., but the counselors want students to know their telephone line is open 24/7. “If you call me at 2 a.m., it’s not a big deal,” says Sparks, who was a clinical social worker in Level-1 trauma emergency rooms and a victims’ advocate in the criminal justice system before coming to BU. “That’s what we’re there for.”

Mahoney says that a sexual assault prevention program had long been on her wish list. She had heard Antonio Arrendel, a former professional athlete turned violence prevention specialist, speak at a nearby conference and remembers thinking, “I would love to have someone like that” at BU. Now she does.

As SARP’s health and prevention educator, Arrendel will work with the Dean of Students Office, conducting two-hour bystander training sessions, which teach students warning signs of excessive alcohol use or predatory behavior and how to intervene. All officers of student organizations receiving funds from the Student Allocations Board are required to attend the training, and resident assistants and athletes have also attended recent sessions. So far, says Mahoney, nearly 1,000 students have been trained.

Arrendel will also work with students organizing campus-wide events like Jane Doe’s White Ribbon Day, which focuses on domestic violence prevention, and Take Back the Night and the Clothesline Project, which focus on sexual assault prevention.

SARP is collaborating with the CGSA to teach a College of Arts & Sciences first-year experience class addressing issues of consent and ways to help a friend after a sexual assault.

Arrendel wants to make all students more aware of violence and its prevention, to have them understand what it’s like to “walk through an alley at night,” he says. “That’s what I want young men to start understanding. It’s not a women’s issue. When a mother or sister can’t go someplace, it’s our issue.” He believes that everyone knows what is right and wrong, but “they don’t feel backed up to say something, to do something.”

Those are refreshing words for CGSA member Sarah Merriman (CAS’12), who has worked in sexual assault prevention and helped write the group’s proposal last spring. “We have a culture that doesn’t talk about consent and doesn’t care,” she says. “We’re the hookup generation. We don’t talk about being a person and having emotions. It always comes down to respect and talking to someone.”

Merriman hopes SARP’s presence on campus is permanent. “They do some of the hardest work on campus,” she says. “I hope it’s always there, that it becomes part of BU.”

The Sexual Assault Response & Prevention Center, 930 Commonwealth Ave., has staff answering calls all day, every day at 617-353-SARP (7277). Students calling after hours have the option of leaving a message or speaking with an on-call crisis counselor. They can also contact staff via email at sarp@bu.edu. All services are free and information is kept confidential.