The end is in sight. The last of this semester’s final exams takes place today and all campus residence halls officially close tomorrow, December 22, at noon, and won’t reopen until January 11, 2013, at 10 a.m. Residence dining service for the semester ends with dinner tonight and won’t resume until Saturday, January 12, 2013.

But for those students, faculty, and staff who are sticking around over Christmas, we’ve compiled a list of activities guaranteed to put you in the holiday spirit. There are plenty of ways to enjoy the start of winter break, from comedy to ballet, ice-skating to shopping, so enjoy!

Downtown Boston’s biggest holiday market has returned for its fourth year, featuring vendors selling one-of-a-kind jewelry, clothing, and artisanal foods, along with appearances by Santa Claus and performances by local musicians on Summer Street. It’s a great place to purchase unusual, last-minute gifts, or you can just wander through the festive streets. Be sure to check out Macy’s holiday windows while you’re there.

The Downtown Boston Holiday Market, at Downtown Crossing on Summer Street (outside Macy’s), is open through December 29, Monday through Saturday from 11 a.m. to 7 p.m. and Sunday from 11 a.m. to 5 p.m. Take any MBTA Green Line trolley to Park Street.

Santa in the City

The Shops at Prudential Center are at 800 Boylston St., Boston. Take any MBTA Green Line trolley to Hynes Convention Center.

The 27th annual Harvard Square Holiday Fair, held in the basement and courtyard of the First Parish Unitarian Church in Harvard Square, has become one of the oldest and most popular holiday events in the Boston area. The fair attracts a changing mix of New England artisans and world importers offering a unique and affordable selection of gifts, including jewelry, pottery, tree ornaments, cards and calendars, art, recycled silk, lamps, hats, scarves, and more.

Marsh Chapel Dean Robert Allan Hill will officiate at the annual service, and seasonal music will be performed by the Marsh Chapel Choir. 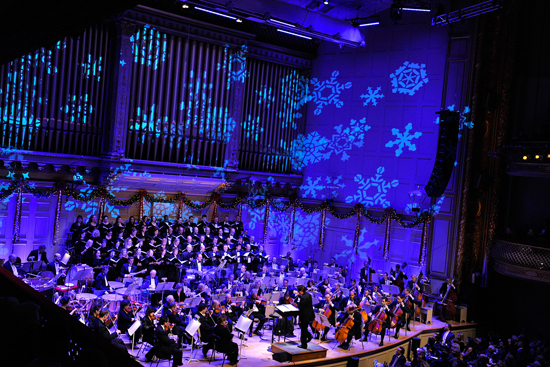 There’s no more festive way to celebrate the holiday season than hearing a Holiday Pops concert. Led by conductor Keith Lockhart (Hon.’04), the Pops will perform Christmas classics and carols, and St. Nick is expected to make a visit as well. Warm up your vocal chords: part of this annual crowd-pleaser features a sing-along. Ticket prices range from $35 to $129, depending on availability and seating section, so try to book in advance.

For more than 40 years the renowned Orchestra and Chorus of Emmanuel Music have been presenting Johannes Sebastian Bach’s extraordinary cantatas in the liturgical setting in which they were meant to be heard. The Bach Cantata Series is performed at Emmanuel Church each Sunday following the 10 a.m. service. Information about the schedule is here.

Emmanuel Church is at 15 Newbury St., Boston. Services are free and open to the public. Take any MBTA Green Line trolley to the Arlington Street stop.

There’s still time to see one of the world’s most beloved ballets, The Nutcracker, performed by the acclaimed Boston Ballet. This year, the company debuts an entirely reimagined production with new sets, costumes, and choreography. A limited number of student rush tickets are available for all performances at $20 each with a student ID. You must arrive two hours before the performance to get discounted tickets, which are cash only. Weekend performances frequently sell out, so it’s advisable to call in advance to check on ticket availability. 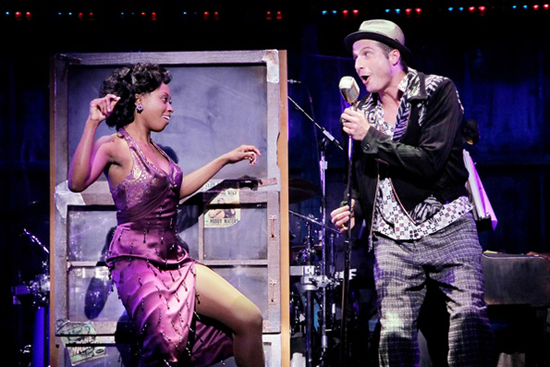 This weekend is your last chance to see the hit Broadway musical Memphis, which won four Tony Awards, including Best Musical in 2010. The show is loosely based on the life of Dewey Phillips, one of the first white DJs to play black music in the 1950s. The show concludes its run on Sunday, December 23. Ticket prices range from $27 to $129. Student rush tickets (up to two per ID) are available 90 minutes before show time on Sunday night only and are subject to availability. More information is here.

Featuring the music of the Holiday Pops, Blink! is a state-of-the-art light and sound extravaganza that transforms Faneuil Hall with more than 350,000 LED lights. Performances begin at 4:30 p.m. each evening and run every half hour until 10 p.m. through December 31. The event is free and open to the public.

To get to Faneuil Hall, take any Green Line trolley to Government Center.

If you’re looking for some quality ice time, Boston Common’s Frog Pond is the place to be. Save some bucks by skating on College Night, every Tuesday evening from 6 to 9 p.m. Show your ID and you’ll pay only $2 for admission.

Laugh away all your post-finals and holiday stress at Improv Asylum in the North End. Boston’s own Gary Gulman presents his special holiday stand-up show, “All I Want for Hannukah is Christmas!” on Monday, December 24. Gulman has appeared on such television shows as The Tonight Show with Jay Leno, The Late Show with David Letterman and Last Comic Standing. The show will also feature special guest Dan Crohn. Tickets are $20 and can be purchased here.

“All I Want For Hannukah is Christmas!” is on Monday, December 24, at 8 p.m. at Improv Asylum, 216 Hanover St., Boston. Take any MBTA Green Line trolley to Haymarket.

Looking for ideas on how to celebrate New Year’s Eve and New Year’s Day in Boston? Check back on Wednesday, December 26, for a list of events you won’t want to miss.

Rockin’ Around the Christmas Tree

There is 1 comment on Rockin’ Around the Christmas Tree