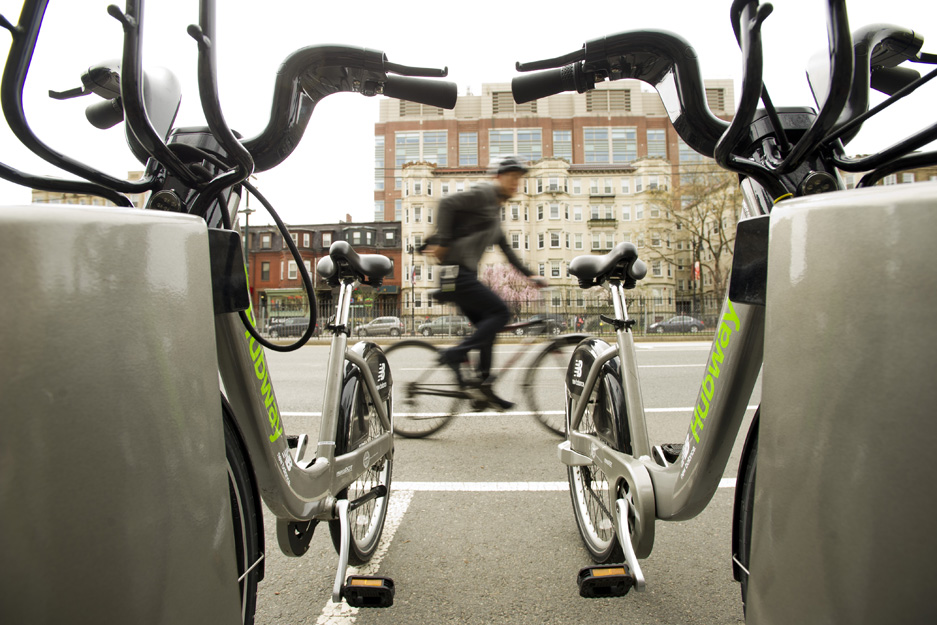 Hubway will celebrate a successful first year tonight at the Boston Society of Architects’ BSA Space. Photo by Cydney Scott

Hubway—Boston’s wildly successful bicycle-sharing program—is celebrating its first birthday tonight and everyone’s invited to the party. The Boston Society of Architects (BSA) is hosting the festivities, with live music, food, and special demonstrations.

An initiative of Mayor Tom Menino’s (Hon’01) Boston Bikes program, Hubway launched last July with 600 bicycles across 60 stations in the city. Participants can choose between annual, 3-day, or 24-hour rental memberships. Hubway takes pride in offering a green and accessible transit alternative and is working to expand to other nearby neighborhoods.

In its first year, the program logged a total of more than 250,000 rides, and by summer’s end it is expected to have a fleet of more than 1,000 bikes and roughly 110 stations, including expansion into Cambridge, Somerville, Brookline, Charlestown, and Dorchester.

The celebration will take place inside the BSA’s Let’s Talk about Bikes exhibit, which showcases bicycle design and innovation and the impact of bicycles on society.

The birthday bash is free and open to the public. Attendees are strongly urged to register ahead of time here. Demonstrations will include Boloco’s bike-powered smoothie maker and Taza Chocolate’s chococycle. Mayor Menino will also make an appearance.

If you ride your bike to the event, you can take advantage of free bike valet parking, courtesy of Commonwheels Bicycle Co-Op.

The Hubway Birthday Bash is tonight from 6 p.m. to 8 p.m. at BSA Space, 290 Congress St. If you’re not taking your bike, take the MBTA Green Line inbound to Park St. At Park St. transfer to the Red Line towards Ashmont, and get off at South Station. Walk one block down Atlantic Ave. and turn right onto Congress St.