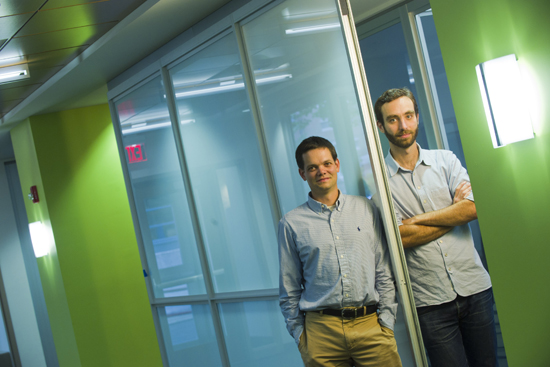 A study by John Byers (left) and Georgios Zervas questions the value that Groupon delivers to merchants. Photo by Kalman Zabarsky

Online daily deal sites like Groupon are great for consumers, offering deep discounts on everything from restaurants to sporting events. But are they good for business?

Merchants who work with Groupon take a risk. They hope that offering a short-term discount, and giving Groupon half the revenue from the deal, will bring long-term gains: a higher profile and new customers. It’s a risk that merchants have been taking without any evidence that it pays off—until now.

John Byers, a College of Arts & Sciences associate professor of computer science, and Georgios Zervas (GRS’11), a postdoctoral fellow at Yale, worked with Michael Mitzenmacher, a professor of computer science at Harvard, to collect a massive amount of Groupon data over six months. The team found that for merchants, Groupon cuts both ways: the deals lead to a surge in Yelp reviews from new customers, but they also lead to a higher percentage of negative reviews. The findings, published recently in the online journal arXiv (pronounced “archive”), call into question the very foundation of daily deal sites.

Byers, Zervas, and Mitzenmacher began collecting data in January 2011. Between January 3 and July 3, 2011, they monitored every Groupon deal offered in 20 cities—16,692 deals altogether. At the same time, they collected data on Facebook “likes” tied to the deals and later gathered data from the daily deal site LivingSocial and the review site Yelp.

It was a huge amount of data to collect and analyze, but Byers and Zervas were well suited for the job. The two researchers also work at Adverplex, a start-up incubator in Cambridge, Mass., that helps businesses monetize their online traffic. At Adverplex, they were investigating online companies with rapid trajectories, so Groupon, which forbes.com called “the fastest growing company ever,” was on their radar.

The most surprising finding involves Yelp, where customers can post reviews of a business and rank it with one to five stars. For each Groupon deal associated with a Yelp rating, the researchers collected all of the reviews posted on Yelp through August 2011. They found a surge in reviews from new customers after a Groupon offer. “The effect is immediate and significant,” says Byers.

The authors aren’t sure if the lower ratings have a long-term impact on businesses. But they write that the lower-on-average scores provide “a cautionary note” for merchants. “This could indicate that a more critical audience is being reached,” they write, “or that the fit between the merchant and the new customers is more tenuous than with the existing customers.”

Ultimately, the study shines a light on one of the big issues surrounding daily deal sites: sustainability. According to Byers and Zervas, there is no data—at least none that is publicly available—on whether Groupon is a good deal for merchants in the long term.

By collecting longer-term numbers, they hope to answer new questions raised by the study. Why, for instance, were there more negative reviews on Yelp? Was this a small subset of negative reviewers, or just a broader downward trend? And what happens after the Groupon period is over? Do the reviews rebound?

“The data will speak,” says Byers. “We just have to do the analysis.”

There are 25 comments on Groupon: Bad for Business?