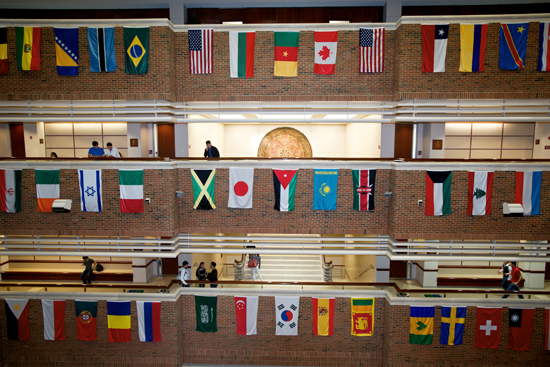 This display of international flags in the School of Management Atrium reflects BU’s 5,200 international students, which makes the University’s international population ninth in the nation. Photo by Vernon Doucette

After earning an MBA at BU in 1974, Rajen Kilachand returned to India, where he mastered and greatly expanded his family’s business. BU was a fond and faraway memory. Then, a few years ago, he got an email from President Robert A. Brown, who happened to be traveling to Dubai, where Kilachand had based his booming conglomerate. Could they meet? “I didn’t know who he was,” Kilachand confesses.

They met. Brown and Scott Nichols, BU senior vice president for development and alumni relations, explained their determination to reacquaint the University and its international alumni, especially those outside of Europe, says Kilachand (GSM’74), who has since become a BU trustee. “Bob has really connected with the people outside the United States who got educated here and who had practically forgotten about it.”

As BU increasingly shakes hands with alumni living in distant lands, they have shown remarkable generosity. Kilachand has pledged a record $25 million, announced yesterday, to endow the University’s new Honors College, which will be named the Arvind and Chandan Nandlal Kilachand Honors College in honor of his parents. While University officials say that donations from international alumni remain a small percentage of overall giving, they note that a number of sizable gifts are remaking areas of BU’s teaching and research.

Last year saw the announcement of a $15 million pledge from trustee and Lebanese businessman Bahaa Hariri (SMG’90) for a 21st-century computation institute, which opened this fall. The School of Management building is named for Hariri’s father, assassinated Lebanese Prime Minister Rafik B. Hariri (Hon.’86), a former trustee, whose 1996 gift of $10 million built the structure. In 2008, India-born Shamim Dahod (CGS’76, CAS’78, MED’87), a University overseer, and her husband, Ashraf, pledged $10.5 million to the School of Medicine, its largest gift ever. Also that year, Chinese alumni greeted Brown on his first visit to their country as president with $1 million to expand BU’s China activities.

What makes gifts the size of Kilachand’s and Hariri’s—“lead gifts” in the language of fundraising—so important these days is that the recession has taken a toll on fundraising in the United States, according to the Chronicle of Higher Education. The paper reports that the wealthiest donors have slashed their contributions to higher education by more than half since the economy began its dive, while overall donations dipped almost 12 percent in 2009 from the previous year.

The big gifts BU recently received show the emergence of committed philanthropists from the Middle East and Asia. In Korea, for example, the parent of an alum anonymously has given $1 million, while Young-Jae Han (GSM’79), who was given a Distinguished Alumni Award in 2009, pledged $500,000. In China, BU trustee Hugo Shong (COM’87, GRS’90) has made a “substantial commitment” to BU, says Nichols, while Xinhua Howard Zhang (LAW’93) has pledged or donated $250,000 to BU in recent years. From Hong Kong, Hup Fong (SMG’67) has given $250,000 and parent Hing Wah Cheung $500,000.

“International giving has only recently become an important focus for BU,” says Nichols. “What President Brown and others have discovered in their recent travels around the world is a deep reservoir of goodwill toward BU. People are willing to donate their time, energy, and money to the University.”

The International Advisory Board is both an example and an engine of that commitment. The two-year-old board advises Brown on outreach efforts.

Like their American counterparts, international donors fall into two groups: those who give for specific activities and those who don’t restrict the use of their money. Many are interested in providing scholarships to students from their home countries or regions, says Nichols.

It’s also possible that donations from abroad could plug holes in U.S. research support, says Azer Bestavros, a College of Arts & Sciences professor of computer science and the founding director of the Rafik B. Hariri Institute for Computing and Computational Science & Engineering. While his own research depends on U.S. government and industry dollars, he says, “there are many dimensions of research in computing and in computational sciences that are quite hard to support through U.S.-based institutions.” Digitizing text in different languages and scripts, inventing technology for rural developing nations, or devising techniques to counter censorship of authoritarian governments have less application at home and “are far more relevant to international alumni,” Bestavros says.

Encouraging gifts from international donors is, to some extent, a simple matter of arithmetic. For one thing, there are lots of them—BU has 20,000 alumni abroad, and “they’re disproportionately successful,” Nichols has said. For another, the number of international students who will someday join the ranks of BU alumni is growing. The Class of 2015 boasts the highest percentage of foreign students in BU’s history—16.1 percent—with most hailing from China, India, and South Korea, the nations responsible for almost half of the record 700,000 foreign students nationally in the 2009–2010 academic year, according to the Institute of International Education.

The University ranks ninth in the nation in the number of international students, with 5,200. “BU has to go international,” Kilachand says, “but in a careful manner, so that you don’t sacrifice the quality of the BU name. Let’s face it, out of seven billion people, five billion are living east of Istanbul, and counting. In India alone 60 percent are under the age of 32. I can tell you that BU is a brand in India. It’s a brand with great love and affection.”

Kilachand hopes that a strong global alumni network will benefit the University beyond the bottom line. During his student days in the 1970s, he was struck by how ill-informed many people in Boston were about other countries.

“It’s fascinating that you have a country that can go to the moon, that can make incredible advancements in medical research, science, and technology,” he says, “and at the same time, you’re clueless about the rest of the world.” His dream is that his namesake college “could fill, in a tiny way, a little gap.”