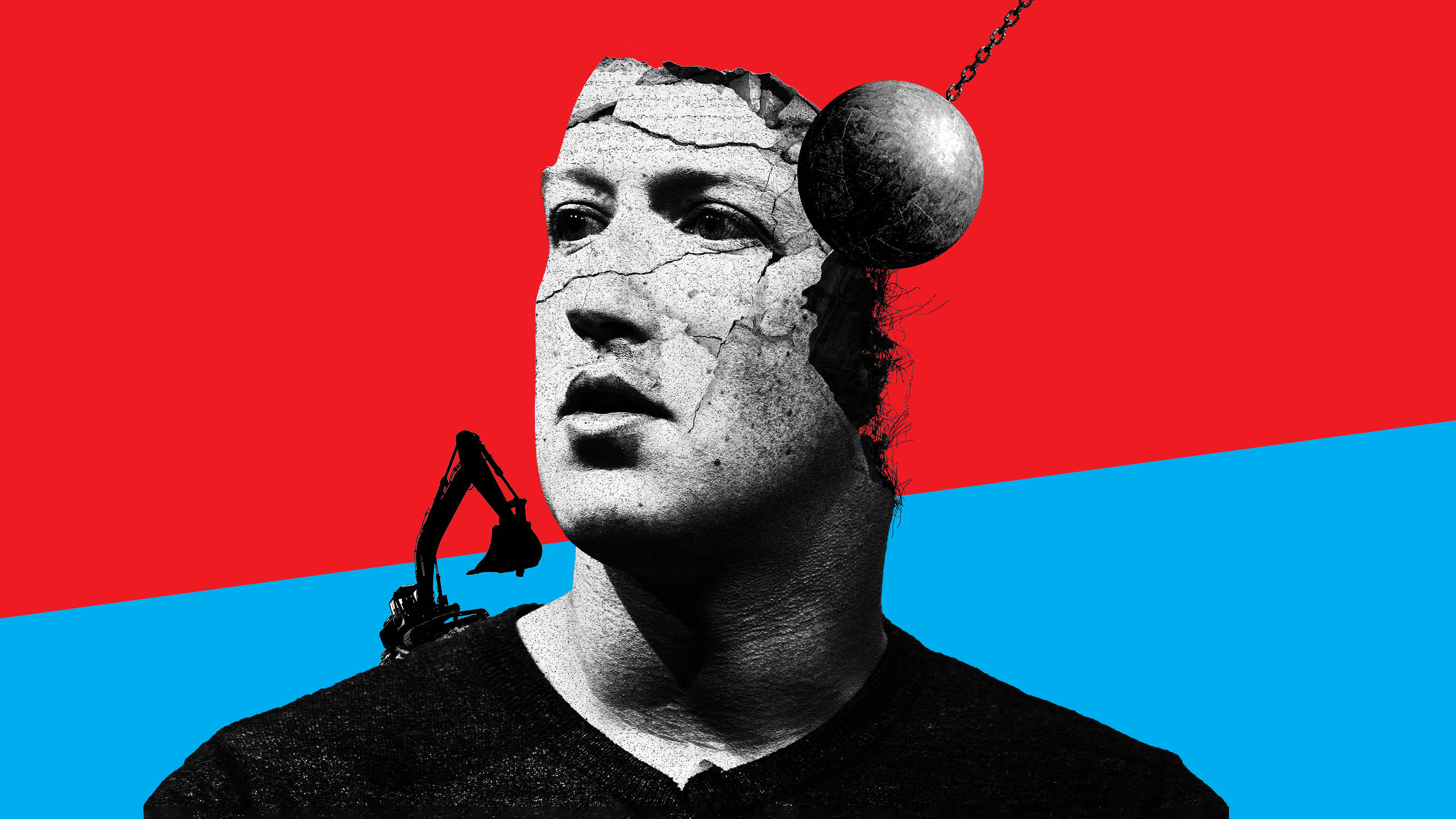 Is It Time to Break Up Big Tech?

Questrom experts on what we need to consider before taking the hammer to companies like Amazon, Facebook, and Google

Facebook CEO Mark Zuckerberg has turned the company into a behemoth; Senator Elizabeth Warren says she would break up the social media giant if elected president. Zuckerberg photo: Frederic Legrand/Comeo/Shutterstock

The calls to break up Big Tech are getting louder—and they’re coming from both sides of the political aisle.

Senator Elizabeth Warren, a Democratic presidential contender, says companies like Amazon, Facebook, and Google have too much power over our economy, society, and democracy. President Donald J. Trump has said “something is going on in terms of monopoly,” and it’s “a bad situation.”

Many Americans agree with them. They worry about the volume of personal data the tech giants possess and the sway these companies have over their lives. Facebook has 2.4 billion active monthly users. Amazon accounts for nearly 40 percent of all e-commerce spending in America. Google gets more than 92 percent of global search engine inquiries. Apple became the first company to cross the $1 trillion mark in market capitalization—a market cap larger than the GDP of Saudi Arabia.

The government is upping its scrutiny of Big Tech, which is facing sweeping antitrust investigations by the US Department of Justice, Federal Trade Commission, and Congress. New laws could be coming too: Democratic Senators Richard Blumenthal and Amy Klobuchar introduced a bill dubbed the “Monopolization Deterrence Act” that would impose harsher penalties on Big Tech companies that engage in anticompetitive practices.

But is it a good idea, or even possible, to split up these companies? We asked five Questrom professors about the questions—economic, political, and customer-related—we need to consider before rethinking our regulation of Big Tech.

Back in the 1880s, many companies in the United States were growing into monopolies using anticompetitive, oppressive business practices. As a result, Congress passed the Sherman Antitrust Act, in 1890, and the Clayton Antitrust Act, in 1914, outlawing monopolies, cartels, and trusts—and they started picking the biggest offenders apart. The American Tobacco Company was broken up into four different firms. Standard Oil became 34 separate companies.

Those broadly worded statutes still hold up more than a century later, says antitrust expert Michael Salinger, Jacqueline and Arthur Bahr Professor of Markets, Public Policy, and Law. “These acts were passed before we had radio, telephones, television—and yet, the principle that it should be illegal to monopolize a market through means other than providing a better product at a better price still holds true.”

But before we start smashing modern monopolies, we need to figure out if they’ve actually broken long-established antitrust laws, says Salinger, who’s also chair of markets, public policy, and law. “These companies need to have violated laws in ways in which an appropriate remedy would be to break them up. We can’t just do it because some politicians think it’d be a good idea,” he says.

That caution is echoed by Garrett Johnson, an assistant professor of marketing: “It’s frustrating that the conversation tends to go along the lines of, ‘These companies are doing bad things, so we want to hurt them by breaking them up.’ If we start breaking up companies wantonly, that’s going to hurt innovation.”

As to whether these companies have violated antitrust laws, Salinger isn’t so sure they have. “You have to ask how they got the market position they have. You’re only guilty of monopolization if you’ve attained your monopoly by means other than providing a better product at a better price. Look at Google. People want to search on Google. Their search yields useful information and it’s free, so it’s no wonder they’ve got such a strong position in the market.”

One solution would be to stop companies getting too big in the first place. Timothy Simcoe, an associate professor of strategy and innovation, believes we should pay more attention to Big Tech mergers before they happen. Take Facebook and its acquisitions of Instagram in 2012 and WhatsApp in 2014. “I don’t know that those mergers got a particularly hard look—and maybe they should have,” he says. That said, Simcoe doesn’t think predicting which mergers will turn a company into a monopoly will be a simple task. “Of course, that’s easy to say and hard to do. Often, these technologies are nascent when acquisitions are proposed.” Simcoe suggests tightening up merger reviews by giving more resources to antitrust agencies, and not placing a presumption of efficiency on every vertical merger.

One of the main purposes of antitrust laws is to protect competition and the market. According to Kabrina Chang, a clinical associate professor of markets, public policy, and law, the first step in determining whether a company has a monopoly is defining its market—something that might not be so easy to do with modern tech giants. “I don’t know what the market is with Amazon,” she says. Jokingly referring to Amazon’s acquisition of Whole Foods in 2017, she asks, “Is it groceries now?”

“What does it mean when Amazon enters healthcare or groceries, or Google enters self-driving cars?” says Marshall Van Alstyne, Questrom Professor in Management and coauthor of Platform Revolution: How Networked Markets Are Transforming The Economy and How To Make Them Work For You. “These are market adjacencies—and you want to be able to bring in high quality and innovation to adjacent industries, but you might still be relying on the market power of a firm that’s incumbent in a narrower industry. The boundaries are getting very challenging to define.”

One answer to the problem of blurry boundaries is to isolate what economists call a bottleneck resource—what gives a company its monopoly power. “What are the joints along which you carve to get the benefits you’re hoping to get by breaking up these companies?” asks Simcoe. “Some economists suggest preventing monopoly providers from entering other industries, so for example, allowing Google to continue in search, but barring it from adjacent markets, like getting involved in airline reservations. If you can identify the bottleneck resource that gives them monopoly power, put that in a separate organization with a ‘must-deal-with-everyone’ sort of requirement, then you spin off all the unrelated businesses into a different unit.” 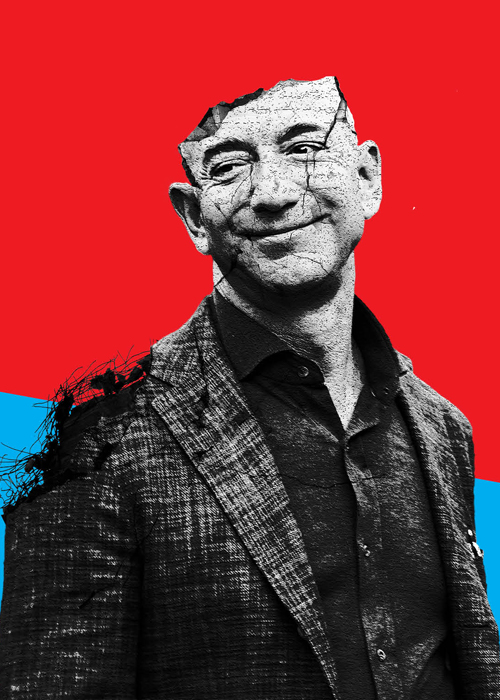 Although Amazon has a market cap of more than $900 billion, CEO Jeff Bezos and the company insist it is not a monopoly. Bezos photo: Lev Radin/Shutterstock

Something else that may give us pause before breaking up tech companies is how much we’ve come to rely on them. Google and Facebook have become integrated into our daily lives: the average person conducts three to four Google searches and spends 35 minutes on Facebook every day. We may be uneasy with the power of tech companies, but most of us willingly sign away our rights to get access to a service. How many times have you blindly accepted online terms and conditions?

Perhaps one of the reasons we’re so distrusting of Big Tech, says Chang, is the amount of power we’ve let these companies accumulate—over us, our data, and our democracy. “They have immense power, and they’ve got immense influence in public discourse. There have even been Supreme Court cases that ruled that since social media is so important, it’s unconstitutional to prohibit people from using Facebook. It really is a modern public square,” she says.

Senator Warren has argued that her plan to break up Big Tech would “give people more control over how their personal information is collected, shared, and sold” and restrict the advantages analyzing our data gives bigger, more established firms. But our data might not be the cash cow we think it is. There’s no doubt Big Tech companies make buckets of money from using our data, especially for advertising purposes—in 2018, Amazon’s ad business surpassed $10 billion and Google’s ad sales totaled $116 billion—but, says Johnson, “these high dollar amounts have caused some people to think that their data is a huge pot of gold being stolen from them by these evil companies. That’s really an overstatement of what’s going on.” For example, on a per-consumer basis, Facebook’s global average revenue per user hovers around $25 a year—capping how much your data is actually worth. “With over two billion users, collectively, each of our $25 helps fund all of the free internet services we enjoy [from Facebook]. This notion that we are being robbed of our high-value data is really overstated, and I think that’s crucial to understand,” says Johnson.

“This notion that we are being robbed of our high-value data is really overstated, and I think that’s crucial to understand.”–Garrett Johnson, assistant professor of marketing

Van Alstyne, who’s also chair of information systems, agrees that the use of our data isn’t always bad. “On one end is using a single user’s data in service of the goals and benefits of that particular user; for example, if you’ve got a heart condition, the doctor wants to know all the data about your previous treatments to deliver the best in the next generation of treatment. Very few people object to that; that’s exactly what should be happening. Then, on the opposite side of the spectrum, which is quite troubling, is using your data to exploit you, either through reshaping your opinions—as in the case of Cambridge Analytica [which was accused of harvesting data from Facebook to help political campaigns]—or price discriminating and charging you more.”

In Europe, regulators have pursued a privacy policy called the General Data Protection Regulation (GDPR), legislation that treats privacy as a fundamental human right, enhancing protections around personal data. “GDPR applies to all data, all forms of personal data, whether it’s extremely sensitive, like your health data, or less sensitive, like whether or not you clicked on an ad,” says Johnson. He’s studying the effectiveness of GDPR and says it’s clear that even with limitations in place, websites continue to share information on their users.

Van Alstyne thinks neither Europe nor the United States has gotten it quite right when it comes to Big Tech and data legislation. “The Europeans are a little too interventionist and quick to use government authority for privacy protection as distinct from wealth creation. By contrast, the American approach tends to be too much one of free markets and allowing firms to do as they please—and while that creates value, it also creates serious distortions of who gets to keep that value. The ideal solution is really somewhere in between, continuing to have companies create value, but taking into consideration the European approach of fair allocation.”

For Van Alstyne, legislation needs to consider how value—for both consumers and companies—is being created. Companies like Facebook, Apple, Google, and Amazon need to be asking how they can both yield a profit and provide beneficial products and services; should they produce their own goods or should they orchestrate those of others? A lot of Big Tech companies have chosen the latter through what Van Alstyne calls the inverted firm, a model where the company’s focus shifts from producing value within to producing value outside of the firm, encouraging others to create on their behalf.