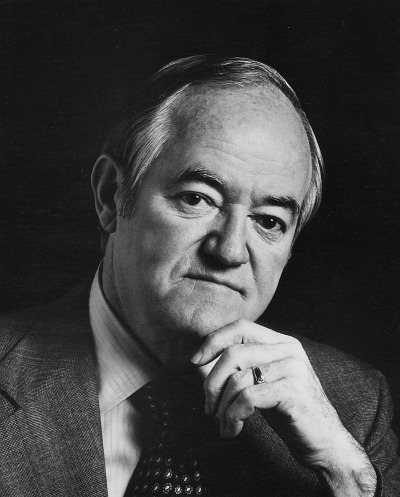 Hubert Humphrey was born in Wallace, South Dakota in 1911 to a homemaker and a small-town pharmacist. He entered the University of Minnesota in 1929, but because of his family’s financial struggles had to leave after his freshman year. Instead of pursuing a college degree, he completed a two-year, pharmaceutical licensure program in just six months, and then spent from 1931 to 1937 helping his father run the family drugstore.

Despite nearly a decade-long break in his education, Humphrey dreamed of becoming a professor of political science. In 1937 he returned to the University of Minnesota to earn his Bachelor’s degree.  In 1940 he completed a Master’s program at Louisiana State University before returning to the University of Minnesota to begin a Doctoral program.  During that program he became so active in local politics that he ended up dropping out. In 1943 he ran for mayor of Minneapolis and lost, but in 1945 he ran again and won in a landslide victory.  He remained mayor for three years.  During his tenure, he worked tirelessly to reduce bigotry in a city then known for its high levels of racial and religious discrimination.

At the 1948 Democratic National Convention, Humphrey delivered a stirring speech in support of civil rights that defied the aggressive pressure of President Truman’s advisers to avoid forcing the issue on the Convention floor. This prompted a walkout by Southern delegates – but Humphrey’s speech persuaded the Democratic Party to adopt a pro-civil rights plank, and it contributed heavily to Harry Truman’s stunning upset victory over his Republican opponent, Thomas Dewey.  In rallying support for Truman through that speech, Humphrey effectively demonstrated that history was on the side of Americans who embraced the concept of civil rights.  Here are a couple of memorable quotes from that speech:

“We cannot use a double standard for measuring our own and other people’s policies. Our demands for democratic practices in other lands will be no more effective than the guarantees of those practiced in our own country.”

Here is an audio recording of the entire speech: http://www.youtube.com/watch?v=8nwIdIUVFm4

That speech granted Humphrey instant, national recognition – and in that same year he was elected to the U.S. Senate.  Over fifteen years, he established himself as one of the country’s most effective legislators, swaying both public and congressional opinion on topics such as fair employment, civil rights, the Peace Corps, nuclear test bans, organized labor, and domestic agriculture.

In 1960, Humphrey campaigned for the Democratic Party’s presidential nomination but lost to John F. Kennedy. He remained in the Senate, where he served as Majority Whip. From 1965 to 1969, he served as Vice President under Lyndon Johnson.

In 1968 he ran for president again and won the Democratic Party’s nomination, but then lost to Richard Nixon in the general election. He returned to the Senate in 1971, was re-elected in 1976, and held office until he died of cancer in January 1978. 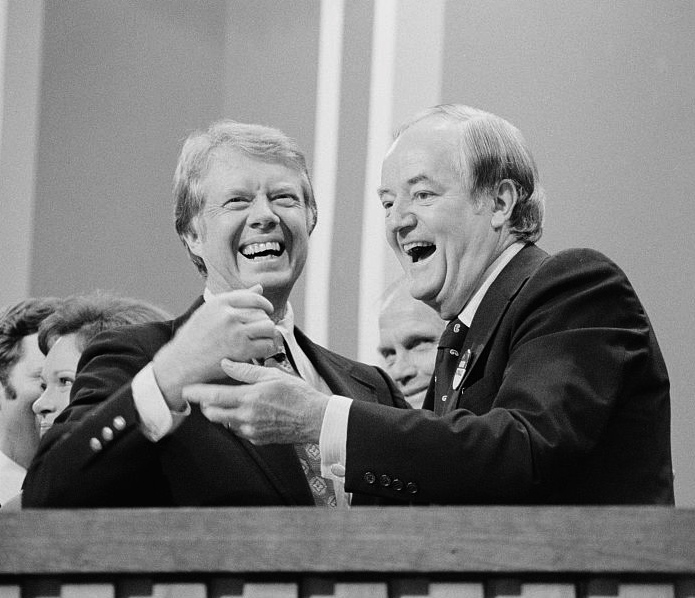 In a eulogy at Humphrey’s funeral, President Jimmy Carter remarked: “From time to time, our nation is blessed by the presence of men and women who bear the mark of greatness, who help us see a better vision of what we can become. Hubert Humphrey was such a man.” Two months later, Carter established the Hubert H. Humphrey Fellowship to honor the late senator’s exemplary leadership, devotion to public service, and courageous efforts to promote greater global justice and peace.

“In this time of national crises…perhaps we would do well to spend a few minutes in considering projects which grace and embellish the earth, instead of shaking it.” 1962

“This is the first generation in all of recorded history that can do something about the scourge of poverty. We have the means to do it. We can banish hunger from the face of the earth.” 1965

“What do we want for people? Human dignity, personal expression and fulfillment, justice, freedom.” 1967

“Be clear where America stands. Human brotherhood and equal opportunity for every man, woman, and child, we are committed to it, in America and around the world.” 1967

“I believe that each of us can make a difference. That what is wrong can be made right. That people possess the basic wisdom and goodness to govern themselves without conflict.” 1968