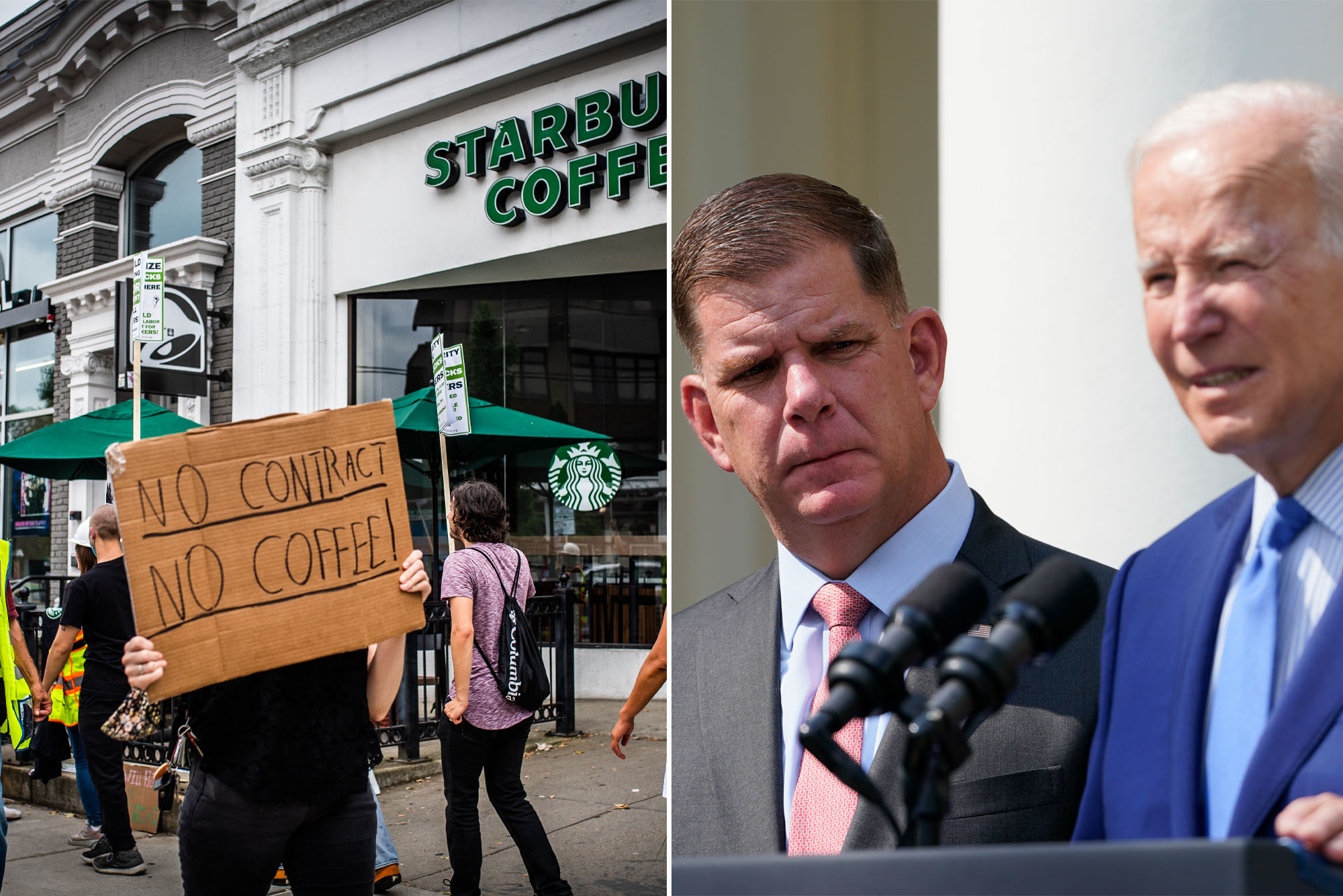 President Biden and US Secretary of Labor Marty Walsh (right photo) announcing the resolution of a near-strike by freight train workers. The now-resolved Comm Ave Starbucks strike was the longest in company history. Photos by Ziyu (Julian) Zhu (CGS’23) and Susan Walsh/AP Photo

It’s hard to imagine how 18 workers at a Commonwealth Avenue Starbucks in Boston could have something in common with 50,000 conductors and engineers in the nationwide Brotherhood of Locomotive Engineers and Trainmen union. But one word bonded them together this month: strike.

The Starbucks workers at BU’s Central Campus location went on strike in July, demanding more flexibility in their working hours and complaining about a manager’s treatment of employees. After 64 days—the longest strike in Starbucks history—the walkout ended Thursday with both sides claiming victory as the store reopened.

The national freight train union never went on strike—but the mere threat of a walkout, which would have had a devastating impact on the US economy, was taken so seriously that President Biden intervened and US Secretary of Labor Marty Walsh had to help hammer out an agreement over 20 straight hours of negotiations. As with the Starbucks workers, both sides walked away satisfied.

So does that mean strikes really work? In this new post-COVID world, where workers feel more empowered to fight for greater flexibility and other benefits, will we see more labor actions? BU Today spoke with Michel Anteby, a Questrom School of Business professor of management and organizations and a College of Arts & Sciences professor of sociology, about strikes, employees, businesses, and who has leverage today.

BU Today: What struck you about these two cases, the striking Starbucks employees and the freight train union’s threatened strike?

Anteby: What strikes me between these two contexts is that Starbucks is fairly typical of today’s economy. It’s a service business. The workforce might be full-time or part-time, people come and go, turnover is probably high. Companies have typically had a divide and conquer strategy in these instances rather than try to cater to every single location.

The freight train issue is really unique, in that it’s an interconnected railway system and if one regional company or hub pulls out, the entire system could be lost. It’s a completely different kind of economy. Very different situations. Some might wish the freight train situation was more the way these things were organized, with the power of labor unions. But apart from transportation, airlines, electricity, there are very few industries that are integrated like this.

BU Today: So what makes some strikes more successful than others?

Anteby: Maybe during COVID there was a feeling that lots of jobs were essential. Many frontline workers were praised for being that front line. That included grocery workers, truckers, nurses. The narrative of you being a hero, being essential, was there. It empowered workers to think of themselves as essential. But in the eyes of the employers, they are still replaceable.

It means you are essential. But you are also replaceable. But some are not replaceable. Think of Uber and Lyft drivers. They were considered more essential during the pandemic. But a lot of people were interested in that line of work, so there was a lot of turnover and they could be replaced.

The central, replaceable, discussion resonates a lot. I conducted a study of puppeteers at Disneyland in California. A small group of maybe 30 puppeteers. They decided to organize, not strike, but during that process Disney just decided to close the show in which they were employed. They all grabbed other jobs, and only a handful stayed at Disney doing other jobs. They were replaceable.

BU Today: Has technology changed the way workers organize or has it made them more worried about being replaced by automation?

Anteby: I would venture that technology has been oversold as a replacement for workers. Uber was built with the assumption that automated cars would replace drivers. This is not happening. If anything, automated cars are crashing, so it’s really hard to see this happening. My sense is that technology is helping workers organize, by comparing working conditions, being empowered to improve conditions.

BU Today: Did the length of the Starbucks strike surprise you?

Anteby: I suspect that they want broader changes, not just for themselves. They really want to make a statement. Some Starbucks locations have unionized. It seems to be more about the principle position and frustration with a manager than just about pay. I see why Starbucks is so concerned. It’s a precedent of who is worthy of joining management ranks. If you delegate that to a team of workers, it sets a dangerous precedent—at least from the headquarters’ viewpoint.

BU Today: What role does COVID play in all this?

Anteby: I published a study about Instacart. They were being called heroes during the pandemic. Their tagline was: ‘Not all heroes wear capes.’ We followed [employee] shoppers who had joined them during COVID. Those who were most likely to embrace the hero narrative were also workers who felt completely entitled because they thought of themselves as heroes. Those who were most motivated and engaged with the mission were workers who were ambivalent about being heroes. They knew those were doctors and nurses. They would try and go above and beyond. They would find toilet paper when it was hard to find. Deposit groceries inside the homes of frail people. The first group who thought they were heroes, they just left the platform. The ones who were more resilient tended to be more productive.

BU Today: How do employers handle this issue of who is essential and who is not?

Anteby: Nurses and teachers, these are two professions where the amount of training and certification to get up to speed has a much longer runway than others. We need more awareness of how easily replaceable workers are when employers are making these decisions. The air traffic controllers under President Reagan were hyperqualified, but the federal government was willing to let them go and replace them with military personnel. The question is how captive you are to your employees. The more captive [a company is] to employees, the more likely a strike will end up succeeding.

BU Today: What did you think this week when you saw the Starbucks strike had ended?

The outcome does underline that even workers deemed “replaceable” can collectively organize and get a say in their working conditions. This is particularly true when the brand equity of consumer-facing companies is at stake.

While Starbucks spokesperson Reggie Borges wrote that “No negotiations were conducted with these partners [workers] for their return,” he did say in a phone exchange [with Boston.com] that “the minimum availability policy [that workers took issue with] did not apply to these Starbucks workers, as their work to unionize predated the rule.” Thus, he is implicitly acknowledging that the unionization efforts did help workers to have a stronger voice with respect to their working conditions.

There are 7 comments on Comm Ave Starbucks Strike Ends: Does That Mean Strikes Work?