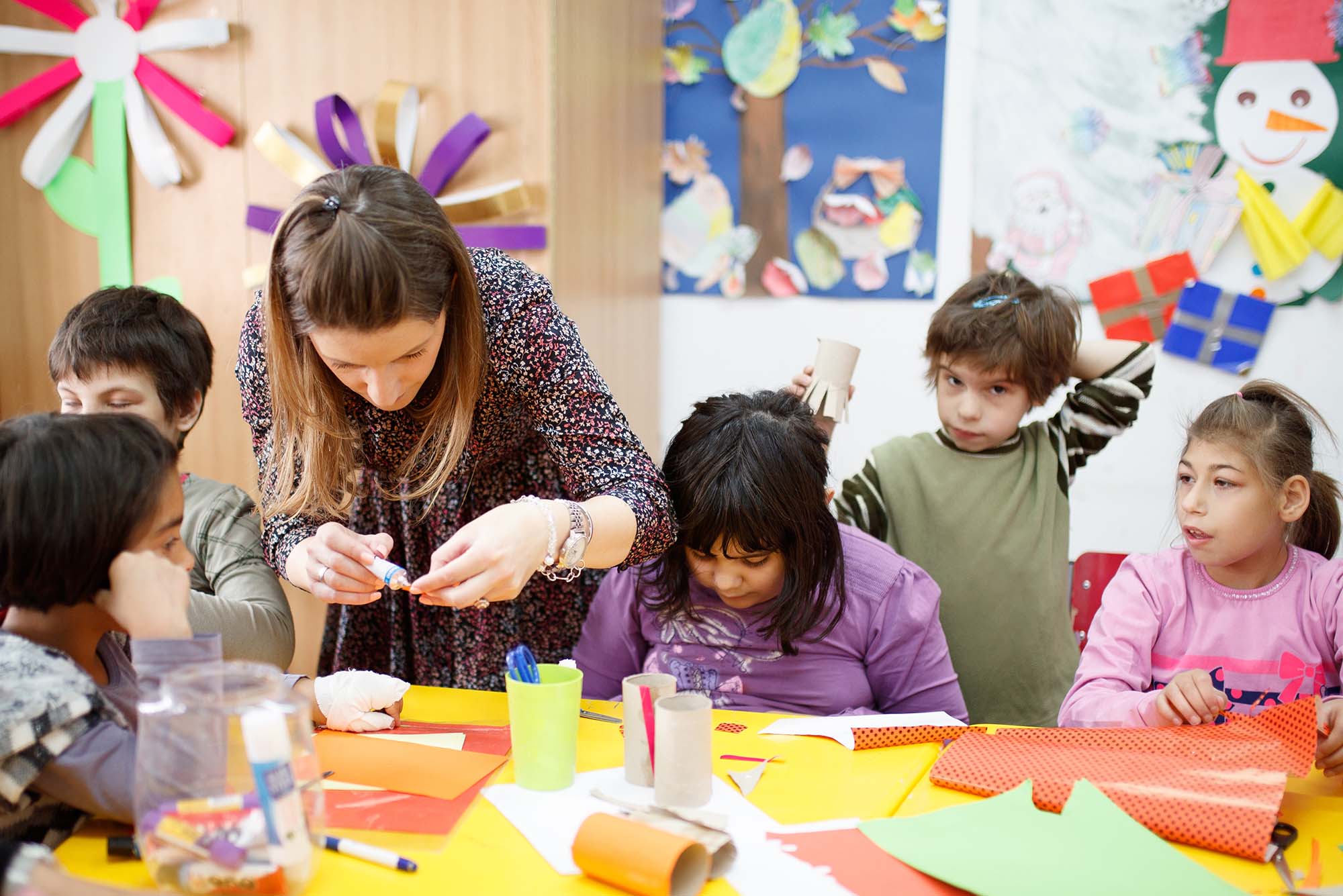 Almost every state has a shortage of special ed teachers, and pay is only one of the problems, Bettini says. Photo by zoranm/iStock

Almost Every State Needs More Special Ed Teachers. How Can They Get Them?

As a special education teacher in Arizona a dozen years ago, Elizabeth Bettini worked with middle school students considered potentially dangerous to themselves or others. One “made some really credible threats and had access to weapons,” she recalls of her emotionally demanding work. But that wasn’t the hard part.

“I loved the kids,” Bettini says. “You can handle that emotional demand if you have time” to plan lessons and decompress. Yet while her contract guaranteed that time, the guarantee was premised on an assumption that her students could do without her during her planning time—an inaccurate assumption, given the behavior issues of some. She usually missed her planning bloc. “I was coming into school at like 4:30 in the morning and planning before school,” Bettini says. “It’s been 11 years since I last taught, and I still, once a week at least, have a dream that I’m in school and I’m not prepped for my lessons.”

Federal law recognizes 13 disabilities as requiring special education, including autism; hearing and vision impairments; differing emotional/intellectual/learning disabilities; and speech or language impairments. In 2020, Hawaii began paying special ed instructors an extra $10,000 a year. Before the pay hike, almost 30 percent of openings in the state went begging or were staffed by people without appropriate licenses; the raise halved that percentage. But more needs to be done, says Bettini, who recently spoke with BU Today.

BU Today: How severe is the special ed teacher shortage in the United States?

Bettini: It is quite severe. It’s very challenging to quantify, because you have to quantify [whether] the district posted an opening and no one applied? Or does it mean they wound up hiring someone who was uncertified or unqualified—for example, people who are emergency certified? [But] teachers have been reporting, since COVID, an increasing desire to leave; special education directors [are] reporting that they are not able to find personnel to fill positions. One of the best papers on this did an analysis of [Boston Public Schools] and found, relative to other positions, there are far fewer applicants for special education teaching positions.

A couple of analyses have looked at Massachusetts. There is a huge gap between the number of special educators that the state will need and the number that are being produced. That gap is particularly large in severe disabilities—intellectual disabilities, multiple disabilities—as well as in rural schools and high-poverty schools.

BU Today: What accounts for this shortage?

Bettini: Prior to 1975, there was no [federal] requirement that schools serve students with disabilities. From the beginning, there has been a shortage of people equipped to do that. Oftentimes, there’s an add-on element without changing the school or making it an inclusive space—we’re going to find someone who can take care of these kids and leave them on their own. There’s been an increasing press for inclusive schools; we have schools that do it well, and we’ve got a lot of schools where those are words but not actually things that they live.

I’ll give you one example. Curricula are typically not universally accessible. Say I get a textbook and student workbook, and I have a student who’s blind; it’s very rare that it comes with an audio disc or file that I can use. In Arizona, I taught students with emotional and behavioral and learning disabilities. I had students in fifth or sixth grade, being at a kindergarten [reading] level. The assessments that came with our curricular materials I had to read aloud to students, or record them. You’re always adjusting everything to include your student.

Places that do these things well tend to be much more affluent. In special education law, the mechanism for making schools change their systems is parent advocacy. If the parents don’t push the school, there’s no incentive for change, and the parents who are well-equipped to do that are generally well-educated, affluent parents who can hire lawyers.

BU Today: Is one of the reasons for a shortage of special education teachers because these children present challenges that the general student population does not?

Bettini: No. That is a common misconception. There is no evidence that the characteristics of the students lead people to leave, with the one exception that teachers tend to be more likely to leave when they work with more students who have emotional behavioral disabilities. [Otherwise], for special educators, the higher the proportion of kids with disabilities they are working with, the likelier they are to stay. If you get into special ed, you want to work with kids with disabilities.

To effectively teach students with disabilities takes knowledge and skills. If you have a student who’s reading in fifth grade at a first-grade level, you have to have tremendous linguistic knowledge, knowledge of phonics and reading instruction, as well as behavior management, because, probably, they’re going to be acting up if they’re struggling that much.

Being a good special education teacher—people reduce it to just character traits, like patience and love, but it takes really sophisticated knowledge and skill.

BU Today: These are people who should know better—you’re talking about principals?

Bettini: Yeah. Typically, they’re not former special educators. I have a family member who was a principal and superintendent and said to me, “Special educators, they’re super patient, but they’re typically not as smart.” That’s not true. There’s this presumption that you’re a babysitter.

BU Today: There’s this popular perception that the problem is we’re coding everything as special ed, even things that aren’t a disability—that we’re overcoding. Is there anything to that?

Bettini: It’s a really hard thing to investigate, because it requires you have the counterfactual: if this kid weren’t labeled, would they have done better than if they were labeled? What I can tell you is that rates of identification for special education have been stable in Massachusetts for quite some time. We have one of the highest rates in the country—I think we’re at about 20 percent. If you look at the rates at which disabilities occur in the population, that is an underrepresentation of the number of students who actually have disabilities at some point in childhood.

Many kids who have disabilities might not need special education; they might need accommodations for a couple of months [during] a mental health crisis. But I would guess that, if anything, we’re potentially under-identifying kids who need
support. Whether or not special ed is the right support for them is an open question. There was a lot of press around Texas; Texas reduced their rate of identification to like 8.5 percent. It turns out that the state told districts, if you identify more than 8.5 percent, you will be audited. They artificially depressed [the percentage], they pushed districts to not identify students who needed services. They’re now involved in lawsuits [and] having to provide compensatory services.

Bettini: Pay is one small piece. Paying people more acknowledges the extra work they’re doing to address the fact
that schools are not oriented towards their students’ needs, as well as the extra expertise required to teach students in the areas where they struggle. That’s kind of a sexy story out of Hawaii–simplifying things down to just pay–but that’s not the only thing they’ve done. They also developed a support network for beginning special education teachers, where they get together virtually and in person; a whole special education teacher appreciation system honoring what special educators are doing. It’s a much more comprehensive system than just pay.

You also need to make their jobs easier. You need to ensure they get planning time. Why is any district buying curricula that are not accessible to every single student? Students with disabilities have a right to access general education curricula.

These problems have been around since the 1970s. They have been getting better. A recent paper of mine looked at how disparities in working conditions between high- and low-poverty schools changed between 2000 and 2018, and in some respects, it has changed. Working conditions were getting better. I also think the shortage has turned policymakers’ attention to this, so there is potential for movement that we hadn’t seen before. It is definitely not hopeless!

Almost Every State Needs More Special Ed Teachers. How Can They Get Them?

Almost Every State Needs More Special Ed Teachers. How Can They Get Them?
0
share this