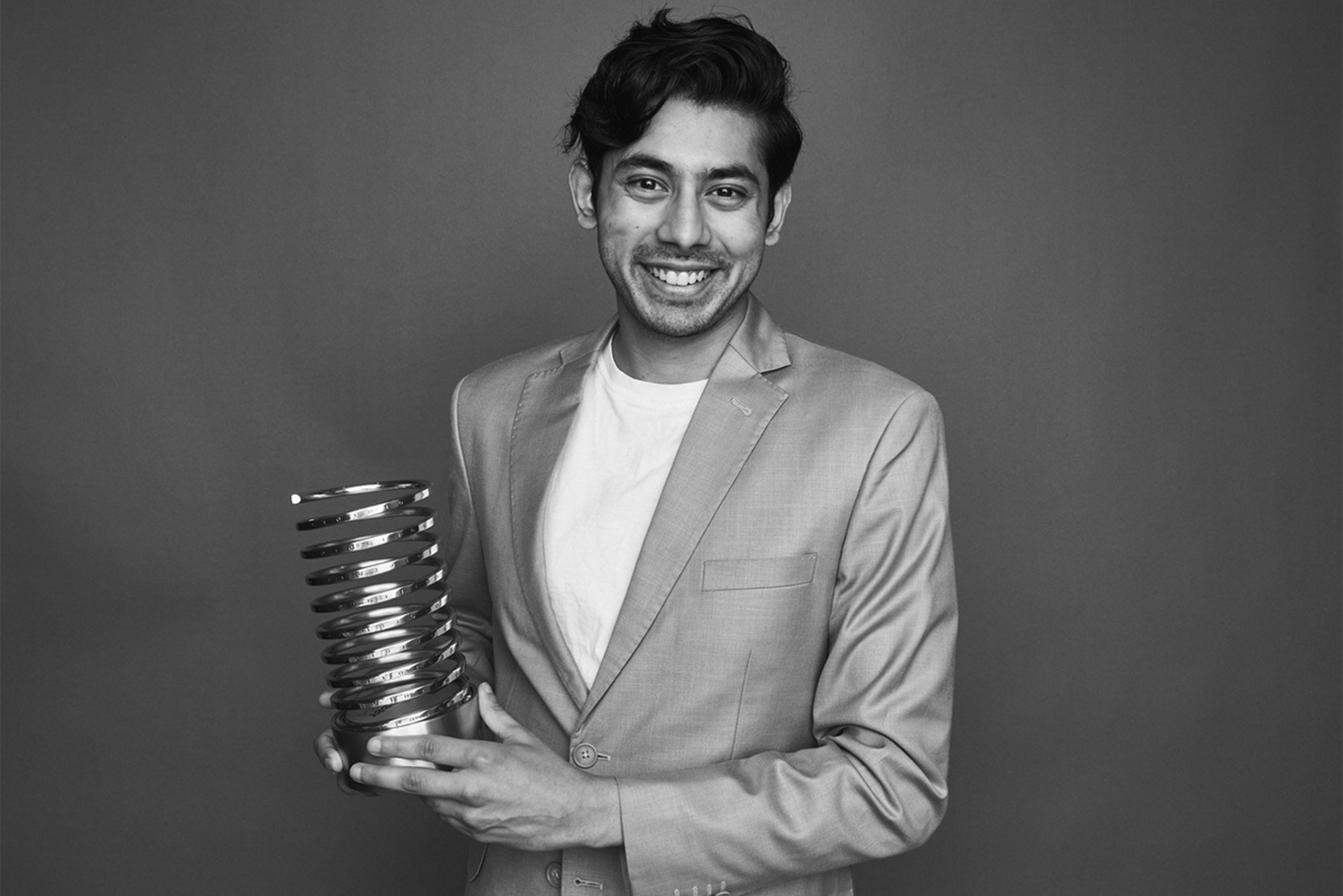 Rohan Gupta with his Webby Award in hand. Photo courtesy of James Hartley

Movie stars have the Oscars, singers have the Grammys, and stage performers have the Tonys. But for those artists, creators, and media personalities whose platform is the internet rather than the screen or stage, there is another coveted award—the Webbys.

This year, one of Boston University’s own took home one of these prizes, presented by the International Academy of Digital Arts and Sciences, sharing the stage with Star Wars, the National Geographic company, and stars like Megan Thee Stallion.

Just under three minutes long, Diversity on Demand is a biting satire of Hollywood’s often-shallow use of token diversity. In the film, Gupta, who is from India, pitches his services as “hired diversity” for producers looking to round out their films. He shows his wide variety of impressions—from stereotypical tropes like convenience store clerk and cab driver to three-dimensional characters. His impersonations of actors Matthew McConaughey and Michael Caine, who offer glowing testimonials of his ability to add token diversity to any project, are spot-on.

Gupta says he was inspired by diversity programs he felt were performative, and he decided to make the satirical short in response. He came up with a “silly character” who encourages this shallow diversity, a character who is cool with being in the background, adding in a little diversity, and then quickly exiting based on what a filmmaker needs and wants.

“Then just different jokes came in where I was like, oh, I could really make fun of this and do some jokes that other people might not get away with,” he says.

Gupta studied accounting and economics in Hong Kong before deciding to make a sharp pivot into film and TV. He wanted to pursue his passion in the United States, and he set about creating videos that he could say were “fully mine.” Being in Hong Kong, he says, he “was so far. I was like, how the hell am I going to get to the States? How am I going to get into the industry, especially given how tough it is if you’re a person of color?”

Gupta began creating videos and projects to build his portfolio. He decided to make the extremely low-budget video that would become Diversity on Demand! using nothing but a studio space in Hong Kong and a green screen. With that, he came to BU to earn a master’s and break into the entertainment industry. He chose BU, he says, because it offered a master’s in the television field, where many other schools focus on film or production.

“This felt like the ideal place for me because I wanted to work in TV comedy. It’s been interesting. I think the part that really was the best was that I think everyone in my cohort is very talented, and there’s a lot of really good writers.”

Gupta says he applied randomly to the Webby Awards and “never ever” expected to be nominated. He was sitting in class when he got the email saying that his short was selected. Then weeks later, he won the People’s Voice public vote and prepared to attend the awards and receive his Webby.

“Two years ago, I was in such a different place,” he says. “I was in such a different situation, where I didn’t even know whether I could end up getting into grad school. I didn’t know if I could afford to come to the United States. So this seemed like a total daydream. Not only coming here, but then because of that video to win a Webby, it just sort of blew my mind.”

Gupta attended a photo shoot and then the live awards on May 16, alongside celebrities such as comedian Keegan-Michael Key, Drew Barrymore, Ben Stiller, and Gordon Ramsay. The night concluded with an afterparty hosted by iconic musician and recent Oscar-winner Questlove.

His advice for fellow filmmakers: don’t focus on aesthetics and high production values in your films the way so many become fixated on, but rather on good writing, storytelling, and humor. “I say that because I was for the longest time the biggest procrastinator, the most lazy person, and it just took me to get off my butt and do it,” he says. “And you can’t even know whether you’re good enough or not until you do it.”

BU’s College of Fine Arts School of Theatre was also recognized by the Webbys this year, in the School/University Sites and Mobile Sites category, for the 2021 iteration of the School of Theatre Showcase website, which shows off the work of graduates. Web design firm ED, based in Australia and New York, garnered the award for designing the website.