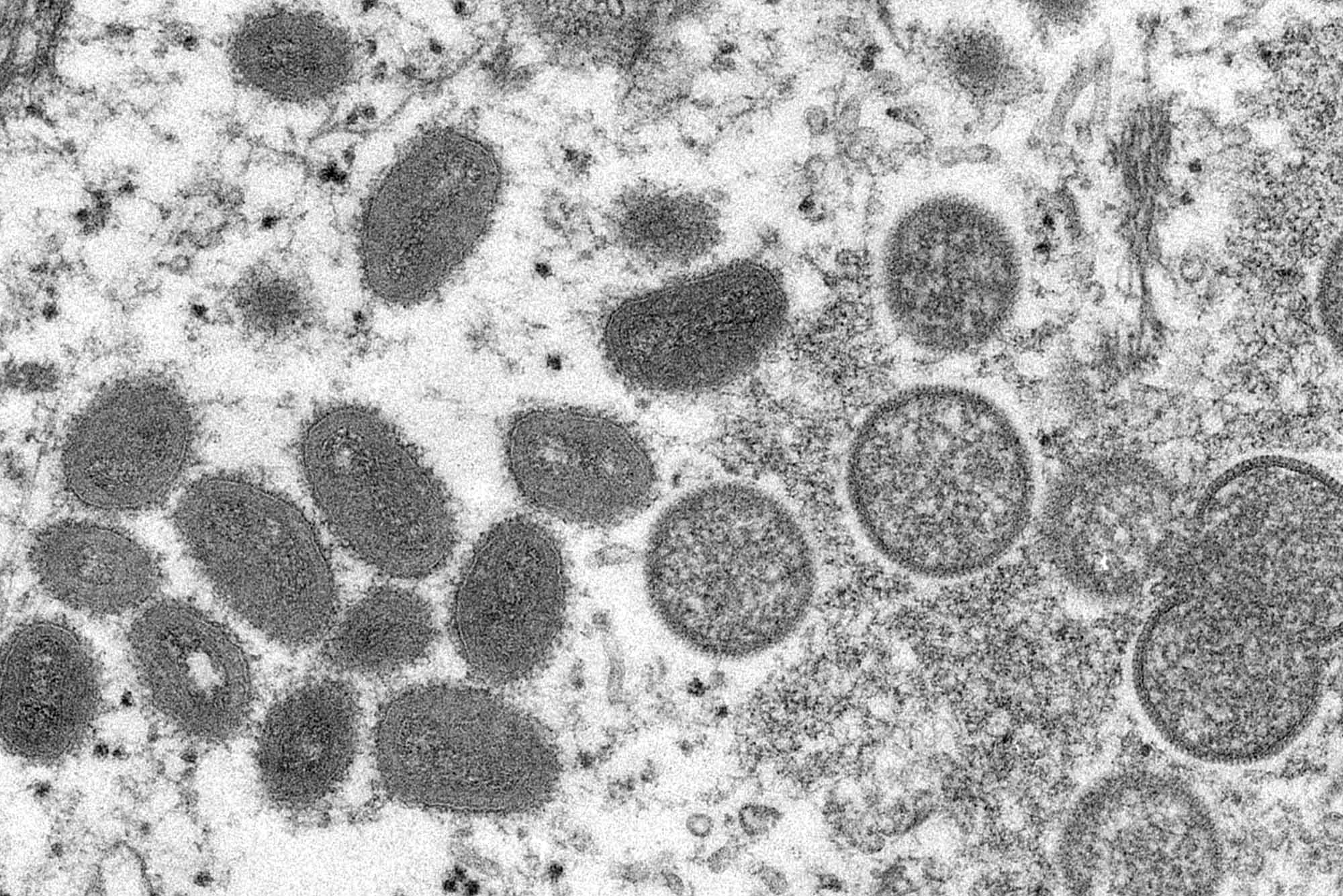 How Worried Should We Be about Monkeypox?

The country’s history with smallpox vaccination might help, but it’s not yet a cause for alarm, says NEIDL virologist

An image of various monkeypox virus particles taken from human skin. According to BU virologist John H. Connor, monkeypox “is not something that has been described as having the really wildfire transmission we have seen with SARS-CoV-2.” Courtesy CDC/Goldsmith. Photo via Smith Collection/Gado/Getty Images

As if COVID-19 is not enough to worry about, now there is monkeypox. In Boston, one patient hospitalized with the monkeypox virus came in contact with 200 people (most of them healthcare workers). And the World Health Organization (WHO) has identified more than 100 suspected and confirmed cases of the virus in an outbreak across Europe and North America. Like similar pox viruses, monkeypox is most often transmitted through close skin-to-skin contact, and can, less easily, be transmitted through respiratory droplets when a patient has lesions in the mouth. Monkeypox symptoms include a fever, headache, exhaustion, and a rash or lesions—about 1 in 10 who contract the disease die from it, according to the Centers for Disease Control and Prevention.

And on Monday even President Joe Biden weighed in, reassuring Americans already exhausted from the COVID-19 experience that the country was ready if it had to take on a new virus. Still, he advised people to be careful.

For some perspective on monkeypox and the level of concern it’s causing, The Brink spoke with John H. Connor, a virologist at Boston University’s National Emerging Infectious Diseases Laboratories (NEIDL) and a BU School of Medicine associate professor of microbiology.

The Brink: What kind of virus is monkeypox?

Connor: An orthopoxvirus. It carries its genome as double-stranded DNA. It is similar to other known human pathogens like cowpox, and it’s also similar to vaccinia, which is the vaccine that was used to eradicate smallpox circulation on this planet.

The Brink: We’ve heard that the smallpox vaccine is effective in protecting people from monkeypox. But are most people vaccinated against smallpox?

Connor: So, the answer is that Americans—and people in many places around the world—used to automatically get vaccinated against smallpox. But then in 1980, the WHO declared smallpox had stopped circulating. And there was a key transition that occurred. There had not been a single case of it, maybe [one] in 1977, and very few cases before then. The effort to eradicate smallpox from the planet was successful. It was worth vaccinating people when there was a threat. Then when the threat completely disappeared, the benefit of being vaccinated against a virus that was not actively circulating was highly debatable. And so vaccination largely disappeared, except for individuals in specific circumstances. Part of the reasoning for why regular vaccination stopped is that the vaccine does have side effects. There was a population health effect of the vaccine. A small number of people, small percent, will have a very strong reaction to vaccination.

Connor: Do you have a scar on your shoulder?

The Brink: I think that I do, yes. But what percentage of the world is vaccinated against smallpox?

Connor: I’m not positive, but I know that number is out there. [According to Pfizer, 80 percent of the world’s population had been vaccinated by 1967. Since smallpox’s eradication, vaccines have typically been held in stockpiles; the United States ended routine vaccination in 1972.]

The Brink: OK, so knowing what we know about monkeypox, and knowing that not everybody today is vaccinated against smallpox, how concerned should we be as we read about this new virus in our midst?

Connor: From my standpoint, people should be aware. But I am not packing the car and heading for the hills. The basis for that is while monkeypox can be transmitted person to person, it is not something that has been described as having the really wildfire transmission we have seen with SARS-CoV-2. There has been an ongoing outbreak of monkeypox in Nigeria since 2017. There are only 500 or 600 cases. Compare that, over five years, with SARS-CoV-2—we are a little over two years in and we are at how many hundred million cases? Of the two current infection threats, I think SARS-CoV-2 is the one that people should be concerned about right now.

The Brink: For people who do get it, how serious is monkeypox?

Connor: It can be a very serious disease. But if it is caught early, and depending on which strain, it might not be. Right now, the current cluster of cases is from that milder strain. But there have been deaths reported from monkeypox infections.

The Brink: Have NEIDL researchers been interested in pox viruses before this latest news?

Connor: We have been thinking about this since 2010, 2011. We are currently supported by the National Institutes of Health grant to research a small molecule that blocks poxviruses, including monkeypox. We are working with colleagues in the chemistry department to take an interesting initial “hit” and make it more potent and more likely to be a successful broad-spectrum anti-poxviral treatment.

Connor: It’s a good question. You may remember this was tried once before. After the anthrax attacks [in 2001], there was very real concern about weapons of mass destruction and biological agents being used as weapons of terror, and smallpox came up as something that would be really horrible. And I agree with that. The armed forces began a vaccination campaign. But I believe they stopped it because there were some severe adverse reactions. It came down to, if there is not a clear and present danger, is the cost of starting up again worth it? That answer could shift if monkeypox becomes an endemically transmitted event. But from my perspective, we’re not there yet.

The Brink: From everything you are saying, you sound confident that monkeypox could be contained?

Connor: Yes. We have evidence of being prepared. Monkeypox has been imported into the United States recently: into Texas in July 2021, into Maryland in the fall of 2021. In both of these instances, importation did not then lead to lots of additional monkeypox infections. In the future, if there is evidence of community transmission, the United States has several options: postexposure treatment and vaccination. The country has prepared in ways that we weren’t prepared for COVID-19. We could react in a big way.

How Worried Should We Be about Monkeypox?

How Worried Should We Be about Monkeypox?
0
share this