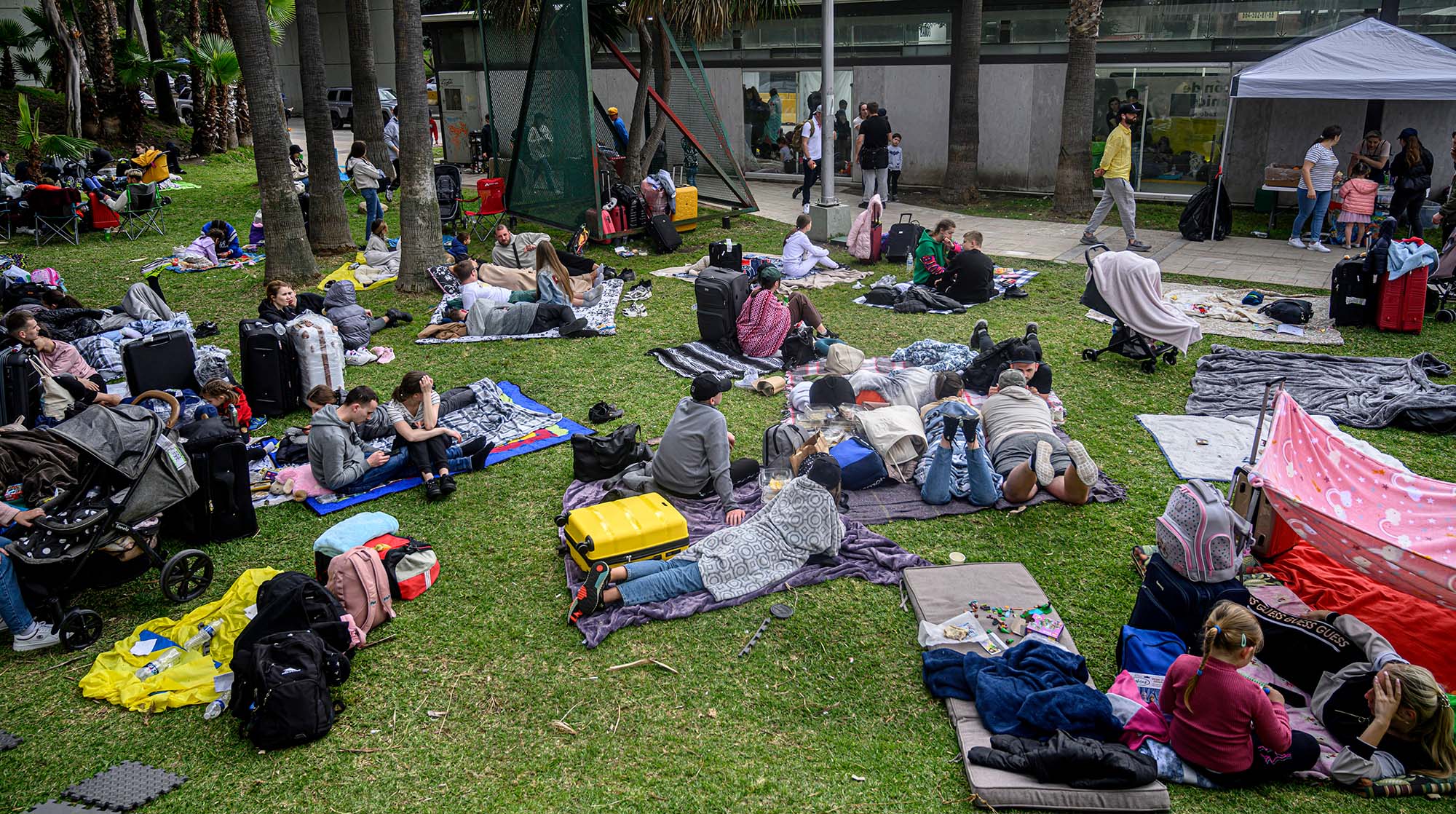 America the Miserly: How Our Refugee System Fails Desperate People

With thousands fleeing Ukraine and millions still displaced by the Syrian civil war, a BU sociologist’s new book faults the United States, Canada, and Germany for letting down refugees

Ukrainian refugees wait in Tijuana, Mexico, for entry into the United States. They may face a difficult transition, according to Heba Gowayed, an expert on immigration laws and social services. Photo by Mindy Schauer/MediaNews Group/Orange County Register via Getty Images

President Biden has pledged to “welcome” 100,000 Ukrainian refugees displaced by Russia’s invasion. What awaits them?

“In all the time that I’ve been studying, working with, and learning from people who are displaced, ‘welcome’ is not the word that they use to describe their experience in the United States,” says Heba Gowayed, an expert on how immigration laws and social services affect low-income people. In her new book, Refuge (Princeton University Press, 2022), the Boston University College of Arts & Sciences Moorman-Simon Assistant Professor of Sociology explains why. Refuge is based on Gowayed’s extensive research tracking and documenting the lives of Syrian refugees here, in Canada, and in Germany after fleeing their country’s civil war, which has displaced more than 12 million people.

Demanding refugees become self-sufficient, the US government pays them three months of support, plus welfare, to set them up in their new country. That’s not enough time, says Gowayed, to learn the English necessary to work or take the citizenship exam, let alone pay rent. And miserly assistance amounts are “rooted in anti-Black racism and fictions of a welfare queen who benefits off the state and is unwilling to work,” she writes. But Refuge also faults other nations’ welcome mats.

While more generous than the United States, Canada, though pursuing consciously multicultural immigration, privileges immigrants and refugees who meet educational and professional benchmarks. That system, Gowayed writes, has been “criticized as reinforcing racial inequalities, class inequalities, and gendered inequalities, which all shape access to the skills that make someone eligible to travel.” Germany, meanwhile, requires credentials before refugees enter its labor market that devalue their existing skills—a “German system for Germans,” as one Syrian tells her.

So what needs to change? The United States should bolster its safety net, Gowayed writes, while divesting from what she calls excessive border security and enforcement. Practicing what she preaches about helping refugees adjust to their new homes, Gowayed, with BU students, runs Citizenship Hub, an English tutoring program preparing people for the citizenship exam. Eight of the program’s participants have already passed, she says.

The Brink talked with Gowayed about her book, the history of our current immigration system, and the implications of trimming border enforcement.

The Brink: What can Ukrainian refugees expect in the United States?

Gowayed: People are fleeing a horrible war. The language that’s being used to receive folks from Ukraine is language of welcome, of warmth, which other refugees have not readily seen. These are not policies that recognize the humanity of people seeking refuge. These policies fall short of investing in people’s skills and possibilities and in recognizing their personhood.

The Brink: In the United States, you make clear in the book, part of that is from our fraught racial history. Given that the majority of Ukrainians are white, can they expect a better welcome?

Gowayed: Their whiteness will protect them from certain aspects. For instance, at the southern border, we had Title 42 [a public health order invoked by the Trump administration to block migrants], which denied asylum for hundreds of thousands of people. The logic was to say this was a public health policy because of COVID. The first discretion we saw around that policy was with Ukrainian families; the Biden administration told US Customs and Border Protection to use their discretion, which they’ve always had, to allow them in. Since then, Title 42 has been rescinded.

Similarly, the statement that we’re going to welcome 100,000 Ukrainians is against the backdrop of a decimated resettlement program. The Trump administration gutted the resettlement program on the basis of racism and xenophobia, saying that Syrians are Trojan horses for terrorism. There have been no cases [of terrorism by refugees], but more than that, we don’t hold white people accountable for Dylann Roof [the white man who murdered nine Black churchgoers in 2015], for white supremacist terrorist attacks. I’m not responsible for what another BU faculty member does, let alone for the world’s 90 million Egyptians, which my nationality happens to be.

The Brink: Terrorists are good at finding weak links. If they know we have less rigorous vetting of refugees, that would be a good place to infiltrate. What kind of vetting and security would you support?

Gowayed: The exploitation of weak links happens everywhere and all the time. Domestic terrorism is our number one threat. We’re assuming that people who are displaced are more likely to join terrorist groups than people who aren’t. But we know that they’re fleeing that thing—violence. These are people who have taken themselves out of a violent conflict and moved.

We subject people to two years of vetting because we start from the assumption that they are more dangerous than you and me. Are people in general susceptible to radicalization? Absolutely. But are they more susceptible to the extent that they require two long years of vetting, while they’re waiting in precarious circumstances? People die in this period of waiting.

The reason we have this long vetting has to do with anti-Semitism in the 1950s. There was this notion that eastern Europeans, and also Jews, were going to be threats to American values. Even when it was implemented, Edward Corsi [US State Department special assistant on refugees] said this is super excessive, there’s no reason to vet people at this level.

We are currently spending $65 billion—with a b—in order to maintain and enforce border security and do immigration enforcement within the country. What does this look like? Americans watched last year as a border patrol officer on a horse whipped Haitian immigrants. And people were up in arms.

The Brink: Canada adopted educational and professional qualifications for immigrants and refugees to plug a labor shortage and minimize reliance on state resources. The Canadian prime minister later said the country wanted a multicultural society, privileging multicultural education and professional status. What’s wrong with that?

Gowayed: Indigenous Canadians are not represented in the multicultural image of Canada. There’s also this idea that because Canada is multicultural by law, there’s less racism there, which is not true. Hate crimes against Muslims in Canada and the United States are pretty comparable.

If you are only admitting people who are highly skilled, and you’re not creating opportunities for folks who are dealing with economic adversity in their country, you’re reproducing inequalities. If anybody crosses from the United States into Canada unauthorized, Canada has the right to push them back. Canada also has a restrictive visa system. Somebody said the Canadian welcome mat is surrounded by a bed of nails.

The Brink: Is there any country whose refugee processing system comes close to your ideal?

Gowayed: Out of the three countries, the one I would choose to go to if I were in that position would be Canada, but it’s not to say that’s the ideal, because people struggle in Canada, as well.

This interview was edited for clarity and brevity.

Gowayed’s research was supported by the National Science Foundation, the Horowitz Foundation, and the Moorman-Simon Professorship.

America the Miserly: How Our Refugee System Fails Desperate People

America the Miserly: How Our Refugee System Fails Desperate People
0
share this