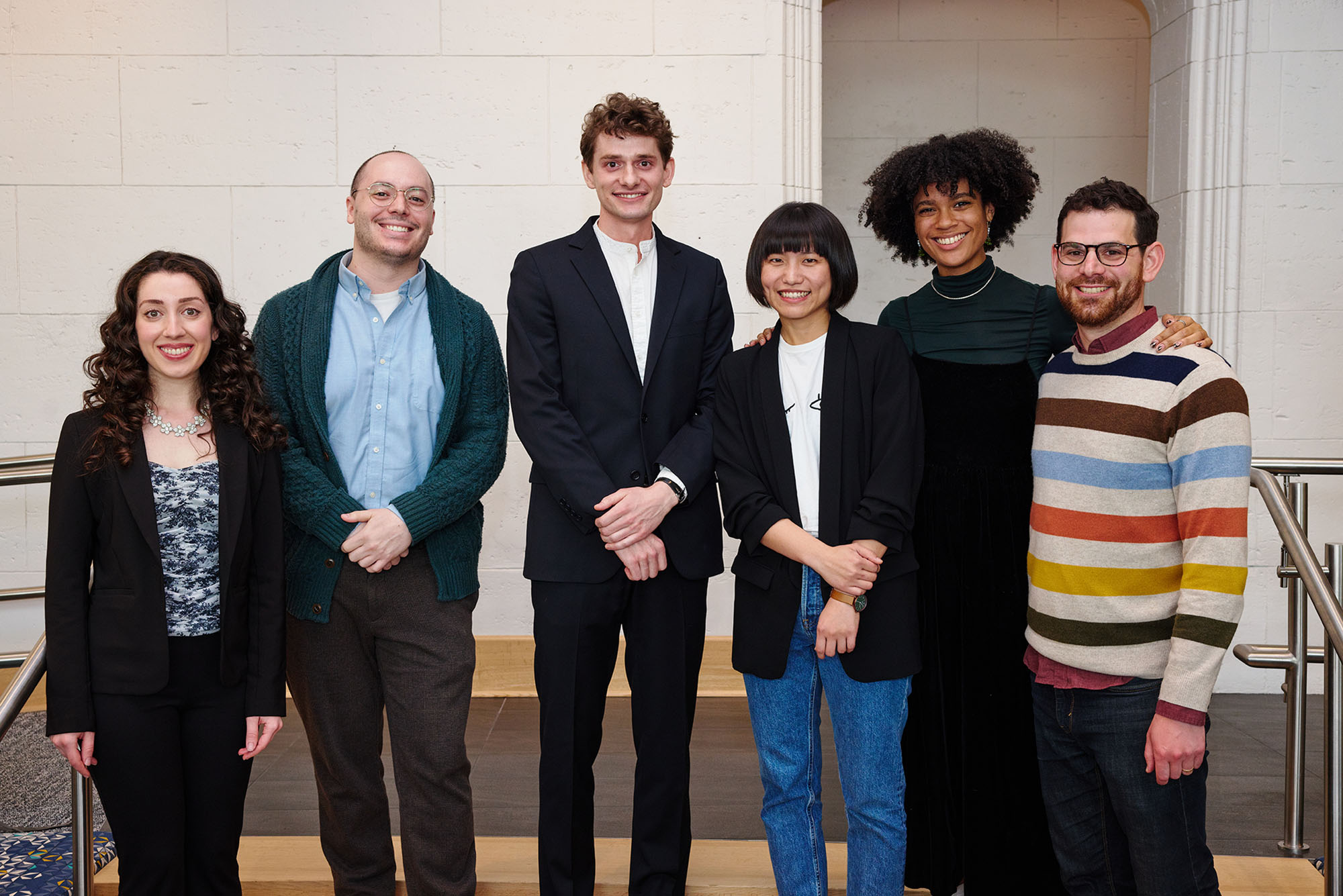 He indulged his left brain after graduation with a job at RAND Corporation, the global think tank, while simultaneously exercising his creativity by teaching himself to paint. At the College of Fine Arts School of Visual Arts, Fahey (CFA’22) studied for an MFA in painting, but gravitated to sculpture as well, an effort “to subvert the painted image,” he says.

“I even stopped painting altogether and made a series of fake political signs I created in Photoshop and printed out on a large-format printer.”

Today, Fahey says, “I still paint, but my new subversion is that I’m the only one who can see the paintings, as they are hidden inside a wooden sculpture. The paintings I bury are portraits of bad actors: corporate malfeasants, shoe-bombers, and ecoterrorists. They’re individuals who tried to remake the world, but ultimately failed to do so,” from Ted Kaczynski (the Unabomber) to I. Lewis “Scooter” Libby (the George W. Bush aide jailed in connection with leaking a CIA operative’s identity).

Funded by a $1 million endowment from the late Esther Kahn (Wheelock’55, Hon.’86), the competition is open to CFA students in their final undergraduate or graduate semester.

“My sculptures are, in a sense, Trojan horses, smuggling sinister characters into the white-cube gallery under the guise of formalist sculptural explorations,” Fahey says. “I want my audience to understand the abstruse structures of power Ted Kaczynski fought against, and Scooter Libby fought to maintain. I want the audience to appreciate that the physical space these sculptures occupy is also a sociopolitical space.

“Finally, I want the audience to recognize that they themselves are not simply a group of powerless individuals, but rather a collective of political beings more powerful than the sum of their parts.”

“Gavin’s intervention on the contemporary public art landscape is often profound and thought-provoking,” says Harvey Young, dean of CFA. “With his playful political posters, which ask, Do people even pay attention to slogans? or his satirical spin on newsprint tabloids or his more recent embrace of reliquaries, Gavin challenges us to think about how we see and experience art in our everyday world.”

My sculptures are, in a sense, Trojan horses, smuggling sinister characters into the white-cube gallery under the guise of formalist sculptural explorations.

Fuel for launching aspiring artists in their careers, the Kahn Award has provided a launching pad for Fahey, whose graduation will leave him without CFA’s work space and the time to hone his craft. “I expected to lose all of these resources once I graduated, but the Kahn Award will change that,” he says. “It will allow me to rent a studio and a woodshop, and to continue the frantic art-making pace I’ve come to enjoy at BU.”

He and his partner will be able to remain in Brighton for at least a year while he rents work space in Allston. Fahey says he’ll use that year to continue sculpting, including what he calls a “new, Boston-centric body of work” addressing the city’s Jekyll-and-Hyde contradictions. This haven of revolutionaries and abolitionists also has been marred by “deep structural racism and a widening wealth gap,” he notes, while its leading academic institutions have produced graduates who became both “neoliberal and neoconservative politicians.”

In addition to the grand prize, five other Kahn winners each received $2,500 for their art or performance:

The artwork of Fahey and other MFA painters and sculptors was exhibited recently at BU’s Faye G., Jo, and James Stone Gallery as the capstone of their two years of study.