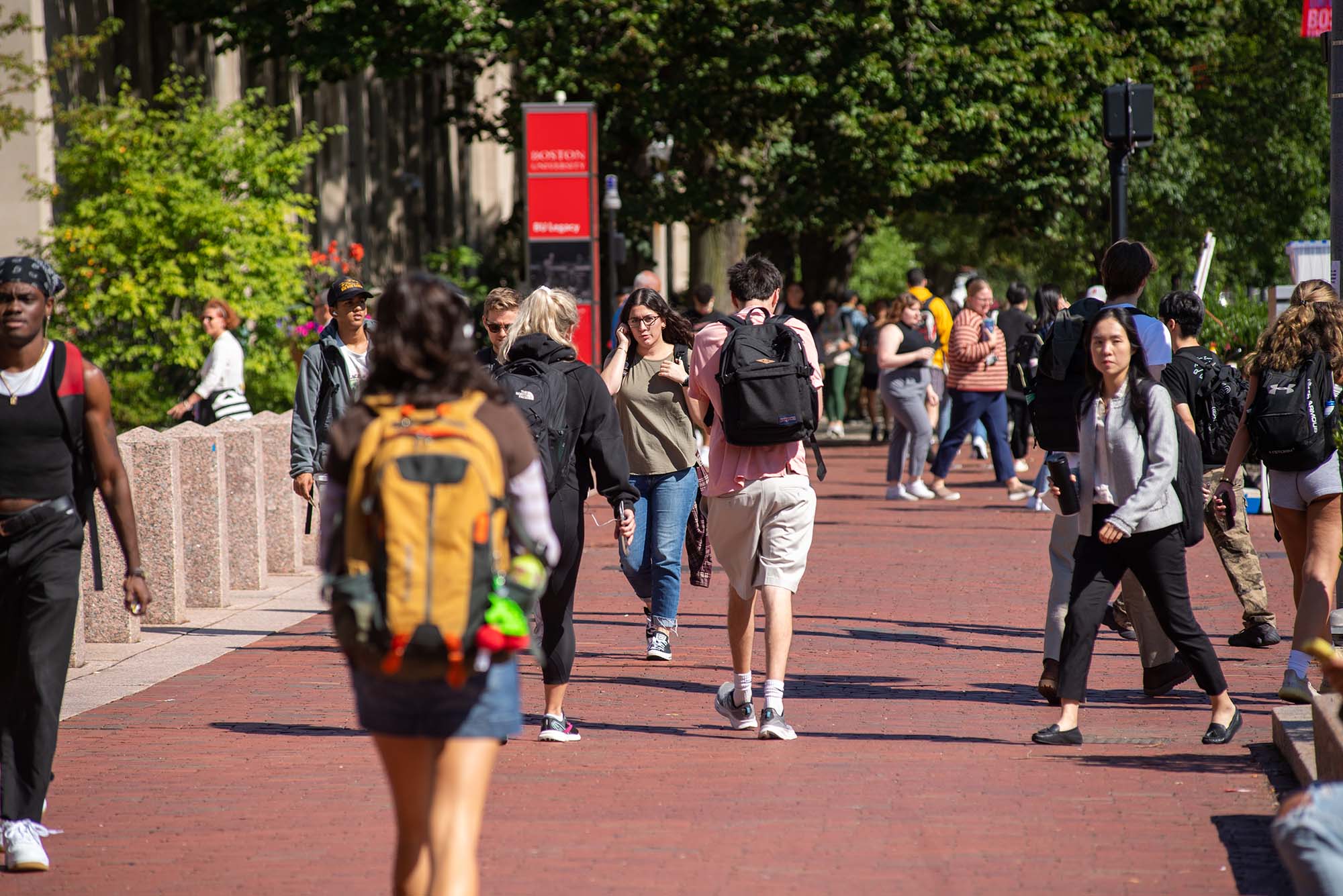 There’s a lot to celebrate in the latest U.S. News & World Report national college rankings: BU moved up one spot overall and 29 spots in innovation. The Questrom School of Business and the College of Engineering also made significant gains of 10 and 7 points, respectively. Photo by Cydney Scott

Boston University moved up one spot, to number 41, in the latest U.S. News & World Report ranking of National Universities, while the Questrom School of Business saw a big jump among business schools and the University overall climbed in the innovation category, according to the list released Monday.

The University shares its spot with two other institutions in the 2023 rankings: the University of Illinois Urbana-Champaign and the College of William & Mary.

The innovation scores are the culmination of peer assessment, according to the news magazine. College presidents, provosts, and admissions deans identified schools “making the most innovative improvements for curriculum, faculty, students, campus life, technology, and facilities,” U.S. News writes.

“It is heartening to see the progress BU continues to make at the national level in innovation and in the quality and relevance of our academic programs,” says Jean Morrison, BU provost and chief academic officer.

“The moves we’ve made this year reflect the dedication of our faculty and the vision they’ve shown for education that prepares students for the workforce of tomorrow. We’re proud of what they’ve achieved, and believe that these advances—with so many exciting new offerings and initiatives underway—are a harbinger of more good things to come,” she says.

“We have been working diligently to improve the quality and experience of our programs and the reputation of Questrom School of Business overall, and we are delighted to see these efforts recognized and rewarded in the U.S. News & World Report Undergrad ranking,” says Susan Fournier, dean of Questrom.

“Our ultimate goal is to attain stature as a Top 20 undergraduate business school, and this year’s current peer rating energizes us in this mission,” Fournier adds. “Our efforts to achieve this goal are multiyear and many. We have a lot to do, and we are guided by a powerful strategic plan that puts students first and provides a roadmap for our actions. I am very thankful to the faculty and staff who are committed to making this happen.”

The news organization ranked 516 business school programs solely on the judgments of deans and senior faculty members at peer institutions, who ranked the overall quality of a program on a scale of one to five. U.S. News took the median score to determine each school’s overall ranking.

Questrom shares its spot with 11 other colleges and universities across the country, including Brigham Young University, Wake Forest University, and Virginia Tech.

Kenneth Lutchen, dean of ENG, touted the engineering program’s trailblazing curricula for its rise this year.

“We have worked together to advance one of the most innovative undergraduate engineering curricula in the nation, one that grasps the importance for all students to experience and synthesize across disciplines, to engage data science methods and cutting-edge, hands-on design throughout their majors,” he says, adding that the efforts were highlighted in the summer issue of PRISM, the trade journal of the American Society for Engineering Education.

“Few programs have retooled their undergraduate curricula for the digital economy as dramatically as Boston University’s College of Engineering,” writes Mary Lord, PRISM’s deputy editor. Among many innovations in the program, Lord points out that its data science courses—which haven’t historically been part of an engineering course load—are required for all engineering majors.

“As such,” Lutchen says, “our graduates are highly prepared for impacting society’s challenges—challenges that engage a new kind of engineer.”

This is the 38th year that U.S. News has ranked colleges and universities in the United States, and this year it evaluated more than 1,450 institutions on 17 measures of academic quality. Those measures include graduation and retention rates, undergraduate academic reputation, results of a peer assessment survey, and financial resources per student, among other factors.

Most of a school’s ranking is determined by four broad categories: outcomes, which includes graduation and retention, accounts for 40 percent of the ranking; faculty resources, including class size and salaries, accounts for 20 percent of the ranking; expert opinion, which constitutes a series of assessments by university leaders, accounts for another 20 percent; and financial resources, or per-student spending, accounts for 10 percent. The remaining 10 percent of a school’s rank is determined by average standardized test scores, admissions selectivity, the student body’s average high school class standings, and alumni giving, according to the news magazine.

BU has made significant strides in terms of financial resources in recent years. In his letter last week to members of the BU community, BU President Robert A. Brown—who will step down as president at the end of the academic year—wrote that of all BU’s accomplishments, he is “most proud of our large commitment to undergraduate student need-based financial aid” and the impact that BU’s bolstered financial aid packages have had on the diversity of its student body.