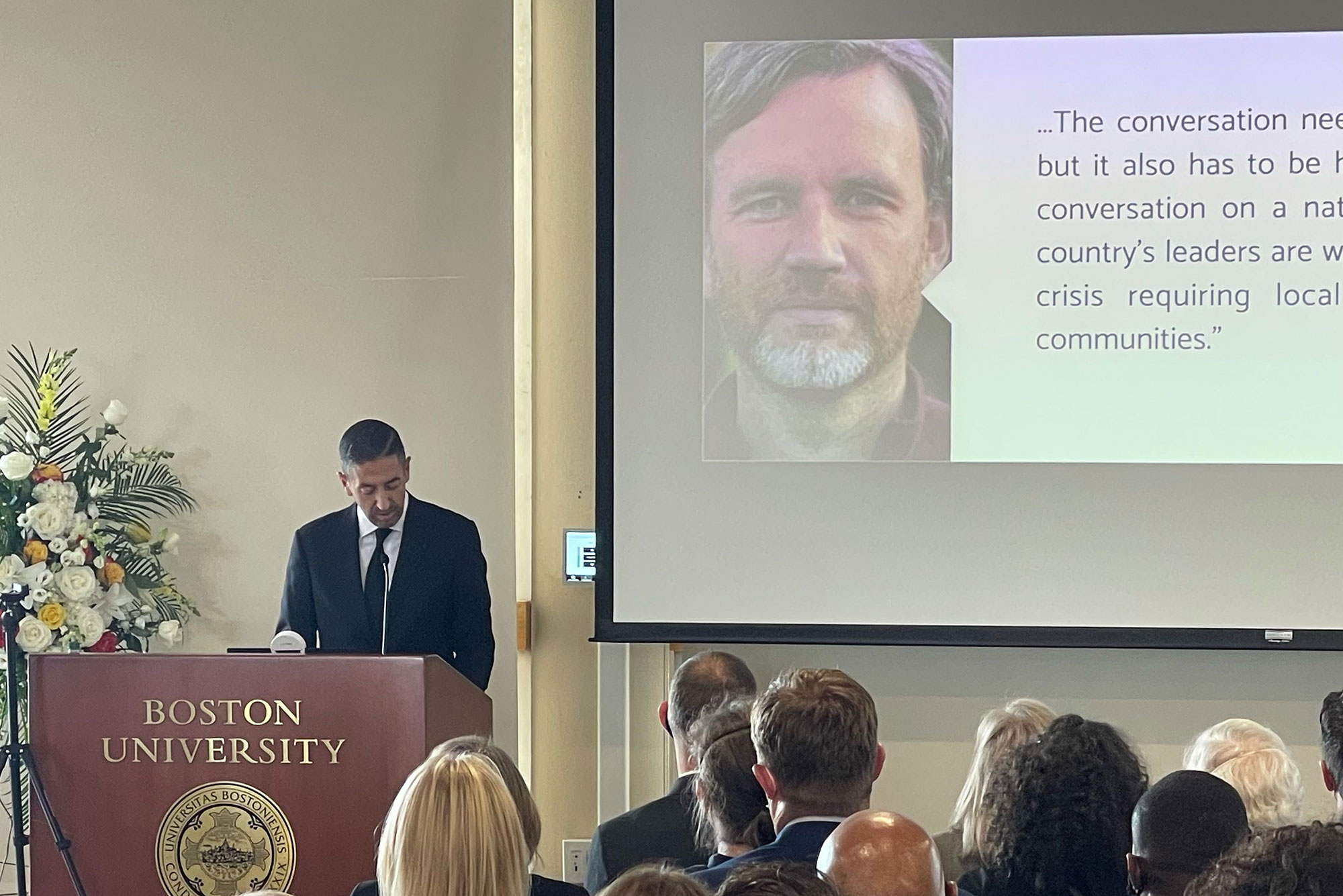 They came to reminisce about a researcher who sought a better world, hosted dinners for colleagues and students, exuberantly described a camping trip with his kids, jammed on guitar, and waged agree-to-disagree debates about whose soccer team was better.

But before David Jones’ mourners said a word at Thursday’s memorial for the School of Public Health scholar, his dean noted that the highest tribute had already been paid.

“It is you, your presence here,” Sandro Galea, Robert A. Knox Professor and Dean, told the gathering in the Medical Campus Hiebert Lounge and on Zoom. “It is not someone’s achievements that draw so many people to their memorial.” (Almost 400 people attended personally or virtually.) “At the end of the day, it is their character—their essential kindness and decency. And David had those qualities to spare.”

Jones, 40, an SPH associate professor of health law, policy, and management, died September 11 after falling through a rusted metal staircase near the MBTA Red Line JFK/UMass station. The stairs, since removed, had been closed for 20 months because of safety concerns and were fenced off.

Suffolk County District Attorney Rachel Rollins is investigating how Jones accessed the staircase while out jogging, as the state faces criticism for not removing it sooner.

At the memorial, colleagues and family remembered a man whose openness to others shaped his personal and scholarly lives. Galea spoke of their divergent soccer tastes (he’s a fan of Italy’s Juventus club, while Jones cheered on Liverpool). Chris Louis, an SPH clinical associate professor of health law, policy, and management, said that Jones and his wife, Sarah Sacuto, turned their home into a hub for junior faculty holiday parties and classes with students over dinner.

Jones once scheduled field research on a project they shared to coincide with a nearby concert by Jones’ beloved Phish, Louis said. More seriously, Jones’ compassion extended to his professional life, which was spent “telling the stories of people who didn’t have his platform or gift of gab.” At the time of his death, Louis noted, he was working on a book about the social determinants of health in the Mississippi Delta, retracing the late US Senator Robert Kennedy’s trip through the impoverished region in the 1960s. One of his written lines, Louis said, was: “I believe health equity is possible.”

“This quote exemplifies everything I knew about David,” he said. “He was hopeful.” That optimism fortified him during the last year, caring for his wife as she successfully battled cancer. “He would tell me how hard things were.…He told me how he had to stay strong for his family, for Sarah, for the kids.”

Amassing almost 90 publications in eight years, Louis said, “David was on a rocket ship to the top of his field.” (He noted that you could observe Jones’ growing success by his succession of upgraded scooters, his preferred mode of transportation.) “If every one of you loves what you do…as much as David did, consider yourself lucky.”

At the end of his remarks, recalling that he and Jones hadn’t been able to get together for a planned beer before his death, Louis sipped one at the podium.

He has left us a seed—his legacy, which has already done much to shape our school, and which will only grow in the future.”

Jones’ mother, Debra Bingham, fought tears when she spoke, saying, “I kept debating if I actually wanted to do this or not.” She thanked those gathered, their faces etched with grief, “for being such good friends” and called on them to continue her son’s work “to create safe and healthy environments for all people.”

David Rosenbloom, an SPH professor of health law, policy, and management, who was part of the team that recruited Jones, called him “the best health policy researcher of his generation.

“David chose us, not the other way around,” he said. “David was a strange kind of academic. He got his hands dirty… He [once] worked in a state capital. He even liked some of the politicians.” Not that he always agreed with them, Rosenbloom added, but “David knew that civility was a part of any enduring society, and he practiced it all the time.”

Stephanie Ettinger de Cuba (SPH’03,’21), a student of Jones’ and director of Children’s Health Watch, which researches public policy on child health, remembered a supportive teacher who let her and other students, as future professors themselves, try their hand leading classes. “David made me feel seen,” she said. “David embraced my interest across disciplines, because that’s where he was.”

Jones’ clergyman and friend the Rev. Chukwu Nnah prayed for Jones’ family, among them his children, “Olivia, Thomas, Anne: as they grow without their dad…always help them remember that he’s always with them.”

We call on the gods, and the gods well know
What storms torment us, sailors whirled to nothing.
But if we are to live and reach the haven,
One small seed could grow a mighty tree—

“David’s passing is a sudden storm,” Galea concluded. “But he has left us a seed—his legacy, which has already done much to shape our school, and which will only grow in the future.”

Donations can be made here to a fund for David Jones’ children.