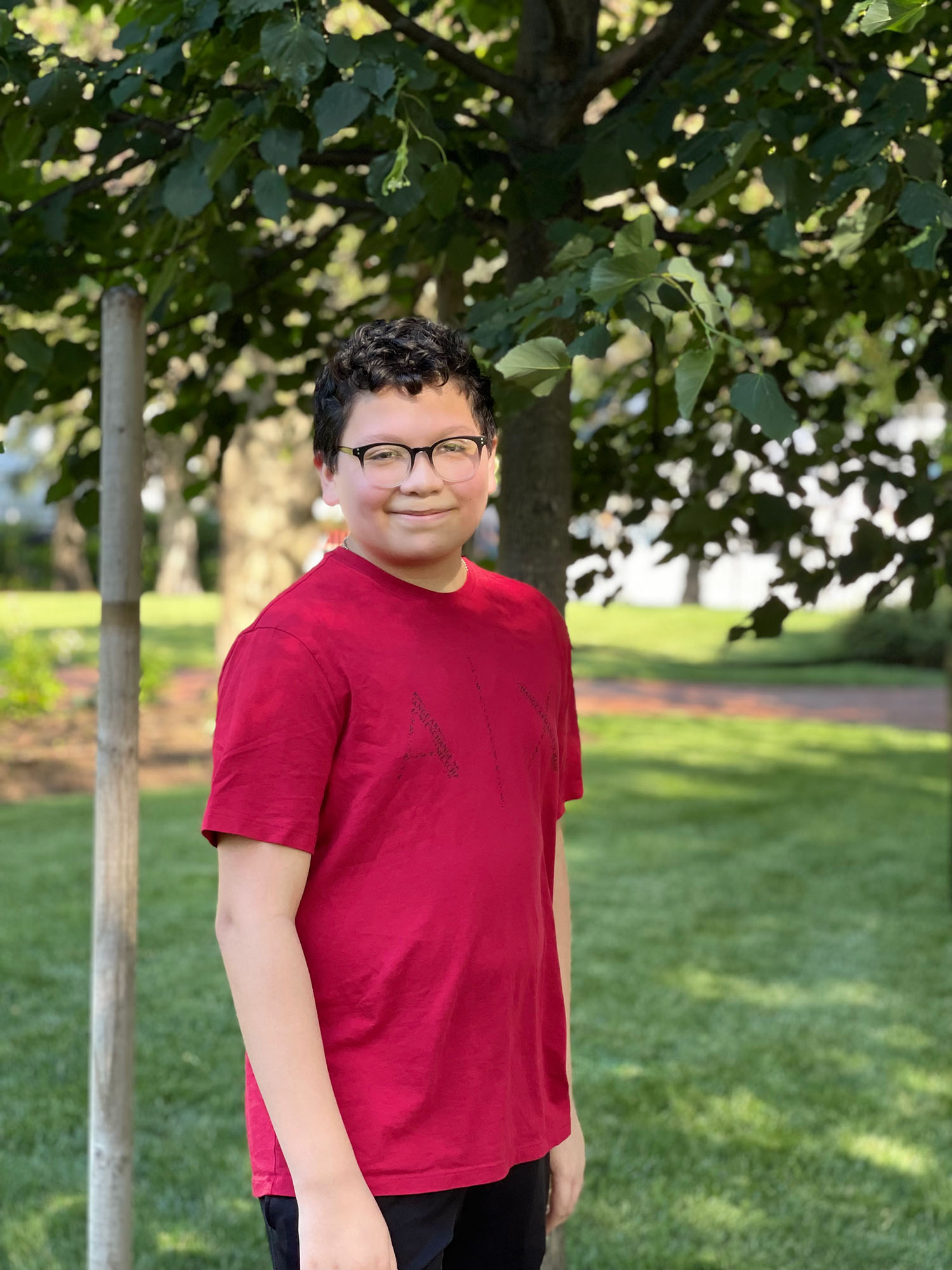 Eighth grader Steven Lue got into coding after staff members from Sociedad Latina visited his school, sparking his curiosity. “It fueled my learning,” he says. Photo by Angelica Rodriguez/Sociedad Latina

Building the Pipeline to Get Black, Hispanic Youth into STEM Careers

Pending grant would boost the partnership between Sociedad Latina and BU aimed at creating a more diverse workforce in science, technology, engineering, and other fields

Zoom opens and Steven Lue pops up. The first things you notice about the 14-year-old eighth grader are his navy blue shirt with the NASA logo and the poster of the moon behind him. “I personally really like space,” he explains with confidence from his bedroom in East Boston. “When I was little, I saw space-related images and I wondered where they came from. I like exploration—it’s a big part of the future of humanity.”

When he’s asked where this interest in science began, he recalls being in sixth grade at Mario Umana Academy in East Boston, when a group from an organization called Sociedad Latina visited during lunch. They handed out lollipops, which satisfied his sweet tooth, and they talked about engineering, which appealed to his curious mind. “The projects sounded really cool,” Lue says. “That’s what got me into coding. I decided to learn JAVA script. It fueled my learning.”

That’s not all it fueled. It also sparked his ongoing engagement with the staff at Sociedad Latina and the Boston University professors they partner with to help more Black and Hispanic youth—Lue’s family is from El Salvador—see a future in STEAM careers (STEAM stands for science, technology, engineering, arts, and math; a slight variation from the more commonly known acronym STEM, which lacks only the arts component).

The need is real.

Hispanics and Blacks are joining the STEM workforce at paltry levels. Black workers comprise just 9 percent of workers in STEM careers. Hispanic workers fill only 8 percent of those jobs, despite representing 17 percent of total employment across all occupations.

What’s worse? These numbers have hardly changed in recent years, according to the Pew Research Center, even though there has been major growth in the number of STEM graduates from US colleges and universities. Even if there is growing interest in STEM fields among Blacks and Hispanics, they are not getting hired.

The ongoing collaboration between Sociedad Latina and BU is working to put a new, more diverse face on the STEAM workforce by providing both academic and family support. Their partnership first got a boost in spring 2020 from a four-year, $1.5 million National Science Foundation (NSF) grant to show more middle school students in Boston what opportunities exist for them in STEAM fields. A second, pending NSF grant for an additional $1.5 million would carry those efforts forward by focusing on entrepreneurship among high school students, a critical group because they are much closer to entering the workforce.

“Part of our model is to keep children involved for 7 to 10 years. It’s really important to keep them working with us continuously,” says Alexandra Oliver-Dávila, executive director of Sociedad Latina. “Youth that stay with us longer do better, have higher graduation rates, end up going to college. They have a different life trajectory. We just want to have a space where those who started in STEM can continue in it—to keep them engaged.”

She says it would be a shame to spend so much time and energy and money on the middle schoolers, but not have opportunities for them to stick with the program into high school.

“Career readiness is so important,” adds Angelica Rodriguez, who runs the organization’s STEAM programs and manages the partnership with BU. “In middle school we hope they find that spark. The high school program is more broad.”

Seeing science as the future

The partnership was born out of a desire to broaden BU’s efforts in community engagement around science, technology, engineering, and math. Paul Trunfio, a BU Hariri Institute for Computing and Computational Science & Engineering senior research scientist and a College of Arts & Sciences physics department senior research scientist, says that desire became a collaboration between the physics department, BU Wheelock College of Education & Human Development, and Government & Community Affairs. That last office serves as the bridge between BU and Sociedad Latina. Trunfio says when the first $1.5 million grant was approved, it was the first NSF grant for Sociedad Latina, which made it “exactly the kind of mutually rewarding beginning that I had hoped it would be.”

Kimberly Howard, a Wheelock associate professor of counseling psychology and applied human development, whose research interests include examining the career development process of diverse, low-income youth, says a big part of Wheelock’s work in the partnership is on career development. “It’s not enough to just help kids see science as cool,” she says. “We have to help them connect it to the future, to occupations. What are the opportunities? Where do I get the information to know if I am interested? We marry those together.”

Two reasons it’s been hard to get more youth of color into STEAM careers: the lack of role models and the reality that after-school enrichment activities are harder to access for children coming from lower-income households. “Schools do their best, but they can’t always reach all of the kids,” Howard says.

V. Scott Solberg, a Wheelock professor of counseling psychology and applied human development, who’s involved in the partnership, says another part of BU’s work is examining résumés of students. They analyze the students’ backgrounds and interests and help them “dig in deeper and have a better understanding of who they are.” But the next step is key, he says: “Then, we give students a set of career pathways to build those skills.”

Last summer, Sociedad Latina had BU graduate students, along with Trunfio, help middle school students with coding and code design at Boston schools. “The reaction was very positive,” Rodriguez says. “The students got so much out of it.”

“The prevailing view is that the pipeline is not there,” Solberg says. “No role models. Students look around and see a bunch of white people in these careers.” He says it’s vital to reach them early, in middle school, and then carry the message through high school, which is why both the current and pending grants are equally important.

“If they don’t imagine it early, you’ve lost them,” says Solberg. “You need them to see a positive experience they can have. That work begins with our faculty, taking our students of color to be those role models. And we are seeing them react to that, in this very active and intentional way, to nurture individuals from a variety of backgrounds.”

Part of our model is to keep children involved for 7 to 10 years. Youth that stay with us longer do better, have higher graduation rates, end up going to college. They have a different life trajectory.

People on both sides of the partnership say the reason it’s been so successful at engaging students is that neither BU nor Sociedad Latina sees the effort as one-sided. Both teams realize they need each other in order for the partnership to succeed.

“We work with a ton of partners, but I feel so much respect from BU,” Oliver-Dávila says. “They respect what we bring to the table, the work that we do, and all the people who are working their butts off for more positive youth development. BU has taken all that we’ve tried to do and helped us to elevate it. They have gone above and beyond.”

As an example, she says, when her staff became burned out during the height of the coronavirus pandemic, BU came in to do some mental health sessions as a show of support.

“What I value about this partnership is it’s a two-way partnership,” Howard says. “It’s not just us coming in here and saying, ‘This is how you do it.’ They are the experts. They know what’s culturally responsive. They know how middle school youth work, and how to reach them and their families. Both sides are contributing what they know and do well.”

A history of community-building

The organization has worked since 1968 with roughly 5,000 Hispanic young people and adults each year to “end the cycle of poverty, inequality to access health services, and lack of educational and professional opportunities.” One goal of the organization is to teach young Hispanics the values needed, and the skills necessary, to become community leaders.

Early education has also become an important mission for BU, through the University’s Data & Network Science in K-20 Education program, whose members include Trunfio, Howard, and Solberg. Those involved focus on enhancing undergraduate and K-12 science education through research, new courses, workshops, and summer internships, as well as getting BU graduate and undergraduate students involved in K-12 classrooms.

For Solberg, helping Sociedad Latina open educational and professional opportunities for underrepresented youth is an especially personal mission. “My oldest son from my first marriage is Mexican American,” he says. “So, for me, how can I support education systems for youth? I am trying to understand the challenges. To do this work, you have to be in a collaborative space with the experts.”

To that end, he says, it’s vital to have diverse perspectives at the table. “Questions are not going to be asked in the right way,” Solberg says. “We need global diversity in [the field], so we are looking at the right questions and coming up with solutions.”

Solberg cowrote a paper titled “Designing Quality Programs That Promote Hope, Purpose and Future Readiness Among High Need, High Risk Youth” last year in the Journal of Career Assessment that addressed the subject. One line from the paper stands out: “As many high need, high opportunity youth may not perceive themselves as being ‘brainy’ enough to pursue a STEM career, it is essential to help youth identify their existing transferable skills that can be applied within STEM occupations.”

As for Steven Lue, he says one surprising thing he’s learned through Sociedad Latina and BU is detailed information about the coronavirus. “It’s not about my grades,” he says over Zoom. “I was able to teach my parents about the virus, and how it’s transferred and what not to do.”

Working with the BU professors on education and career goals, he says, has been “ginormously more important” than spending that time playing some random video game: “It’s a different point of view than any textbook or website.”

“Higher education institutions have a lot of challenges with giving access to underrepresented communities,” Oliver-Dávila says. “It’s a win-win when we team up. I hope that other institutions can look at BU and this partnership, and it can be a win-win for everybody.”

Building the Pipeline to Get Black, Hispanic Youth into STEM Careers

There are 2 comments on Building the Pipeline to Get Black, Hispanic Youth into STEM Careers

Building the Pipeline to Get Black, Hispanic Youth into STEM Careers
2
share this