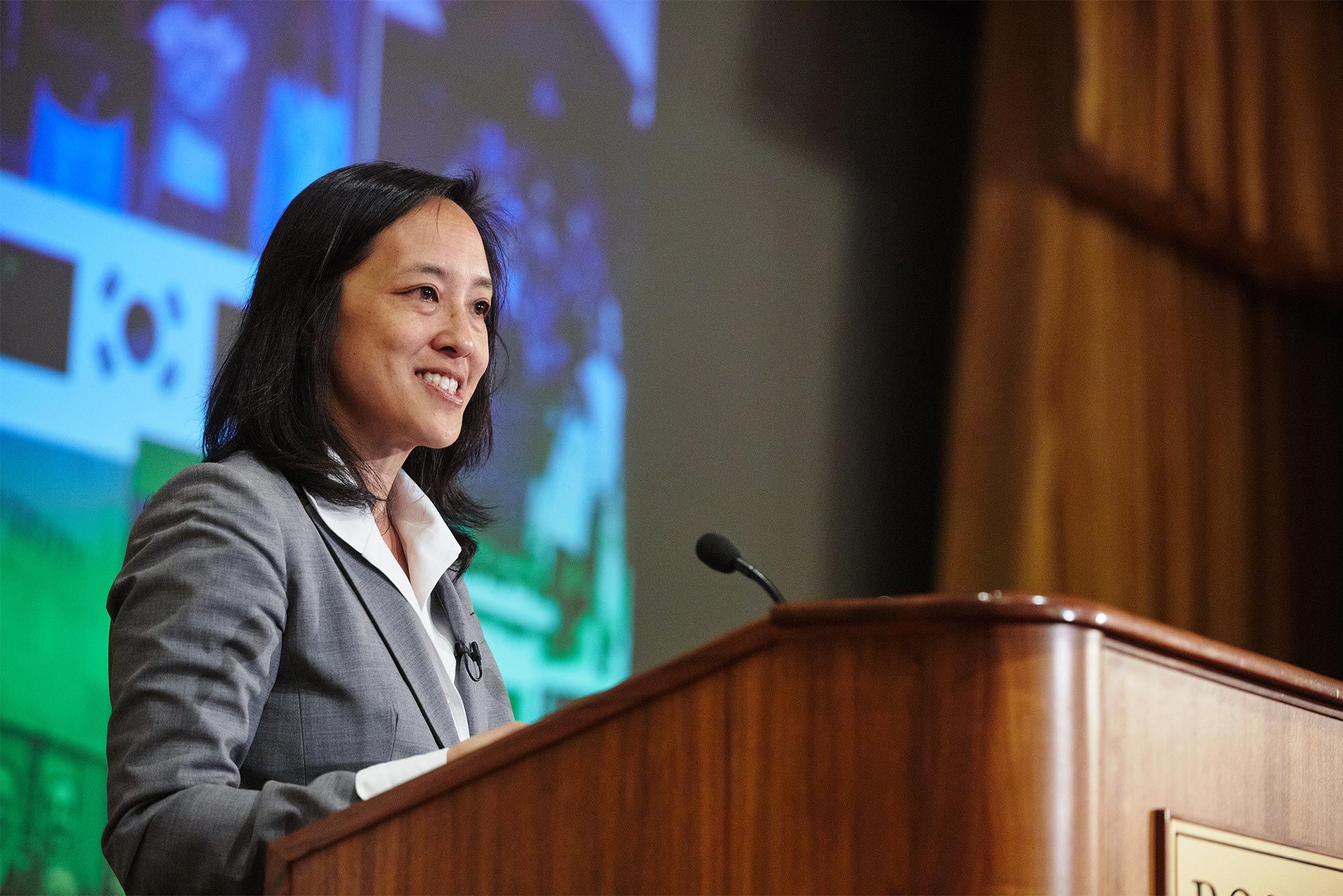 Joyce Wong is admired not only for breakthrough inventions, but also for breaking down gender barriers that have been particularly resistant in the STEM fields. Photo by Dave Green

Joyce Wong’s career as an inventor began with—and was inspired by—a pair of painful personal events. While she was pursuing her PhD at Massachusetts Institute of Technology, her grandfather succumbed to cancer, and shortly thereafter, her father suffered a nonfatal heart attack.

“At the time, I was working with biomaterials and studying their interactions with cells,” says Wong, a Boston University College of Engineering professor of biomedical engineering and materials science and engineering. “I remember thinking, wow, maybe the research I can do will really make a difference.”

A quarter of a century later, Wong’s biomaterial innovations have been recognized by the National Academy of Inventors (NAI), which has elected her a fellow. Her research promises to make a powerful difference in the treatment of several medical conditions, including pediatric heart ailments, cancer, and women’s reproductive health.

Wong’s productivity, resourcefulness, and the breadth of her bioengineering palette have earned four issued patents, more than 100 publications, and dozens of honors—most recently, her election to the NAI. The NAI Fellows Program highlights academic inventors who have demonstrated a spirit of innovation in creating or facilitating outstanding inventions that have made a tangible impact on quality of life, economic development, and the welfare of society.

“[This is] a really huge honor,” says Wong. “If anything, it makes me more excited to innovate. I am extremely grateful for the support from the community at BU. Also, the National Academy of Inventors has lots of resources that members can use, and I hope to use some of those in a course that I teach in device and diagnostic design.”

At BU, Wong is a forerunner in breaking down gender barriers that have been particularly resistant in the science, technology, engineering, and mathematics (STEM) fields. She is a leader in STEM diversity at BU and the inaugural director of ARROWS (Advance, Recruit, Retain & Organize Women in STEM). In 2019, she coauthored a consensus paper published in Science that outlined several policy frameworks that could increase gender diversity in the STEM fields. She is also the chair of the College of Fellows of the American Institute for Medical and Biological Engineering and the chair of the Awards Committee for the Biomedical Engineering Society.

Wong’s recent research has focused on the development of tissue engineering for the surgical reconstruction of blood vessels in pediatric patients, and the migration of cells in response to mechanical factors. But as the pandemic raged last April, she quickly turned her focus to designing medical equipment that could help contain the SARS-CoV-2 virus. Working with other BU engineers, she designed a negative pressure chamber that would isolate patients and prevent respiratory droplets from spreading. She also helped develop a 3D-printed bracket that maintains a reliable connection between an endotracheal tube and an attached respiratory circuit.

John White, a BU College of Engineering professor and chair of biomedical engineering, who has worked with Wong on many projects over the course of 20 years, describes her as “a genius of discovery through innovation and collaboration.” White says Wong’s research group has also made significant progress generating biologically responsive, artificial blood vessels. “They have learned how to build cell cultures of vascular smooth muscle, which is the muscle within our blood vessels that allows our body to regulate our blood pressure and redirect blood to where it is needed. They have replicated the intricate geometries of these smooth muscle cells in a way that makes them useful for vascular grafts,” he says.

Similar work led to some of Wong’s recent patents, issued last year, for tissue-engineered blood vessel patches that can be used to treat congenital heart defects in children. “The important thing is that the patches will grow with the child,” says Wong. “Too many solutions that people have for congenital heart defects are not well-designed, mainly because it’s very hard to do clinical trials on children, so this kind of solution is really important.”

Another of Wong’s patents, inspired by her grandfather’s death and developed in collaboration with Victoria Herrera and Nelson Ruiz-Opazo at BU’s School of Medicine, is aimed at both detecting and treating cancer. Grounded in a field called theranostics, which combines therapeutics and diagnostics, the innovation uses a Janus nanoparticle, so named because it has two faces like the Roman god Janus. “It’s made of iron oxide, which can be detected using magnetic resonance imaging,” says Wong. “One of its faces carries messenger RNA (mRNA), which can target cancer, and the other side contains antibodies to [attack] cancer.” Wong also has a patent pending for a method of preventing abnormal tissue growth (surgical adhesions) that frequently results from abdominal surgery and can lead to infertility.

Kenneth Lutchen, BU College of Engineering dean, says Wong is one of the most versatile and creative bioengineers he has met. “She has a long history of collaborative research success that focuses on innovations that can impact important medical conditions, especially at the interface of biomaterials and tissue engineering,” he says. “Her capacity to develop and expand her collaborative network is almost unmatched, and it fuels her innovative science and inventiveness.”

Wong will be inducted to the NAI at the 2021 Fellows Induction Ceremony at NAI’s 10th annual meeting, held this October in Tampa, Fla. Other NAI fellows from BU are President Robert A. Brown; Theodore Moustakas, Distinguished Professor of Photonics and Optoelectronics Emeritus; and College of Engineering Professors David Bishop, Xin Zhang, Vinod Sarin, and Mark Grinstaff.

Joyce Wong Elected to National Academy of Inventors
0
share this