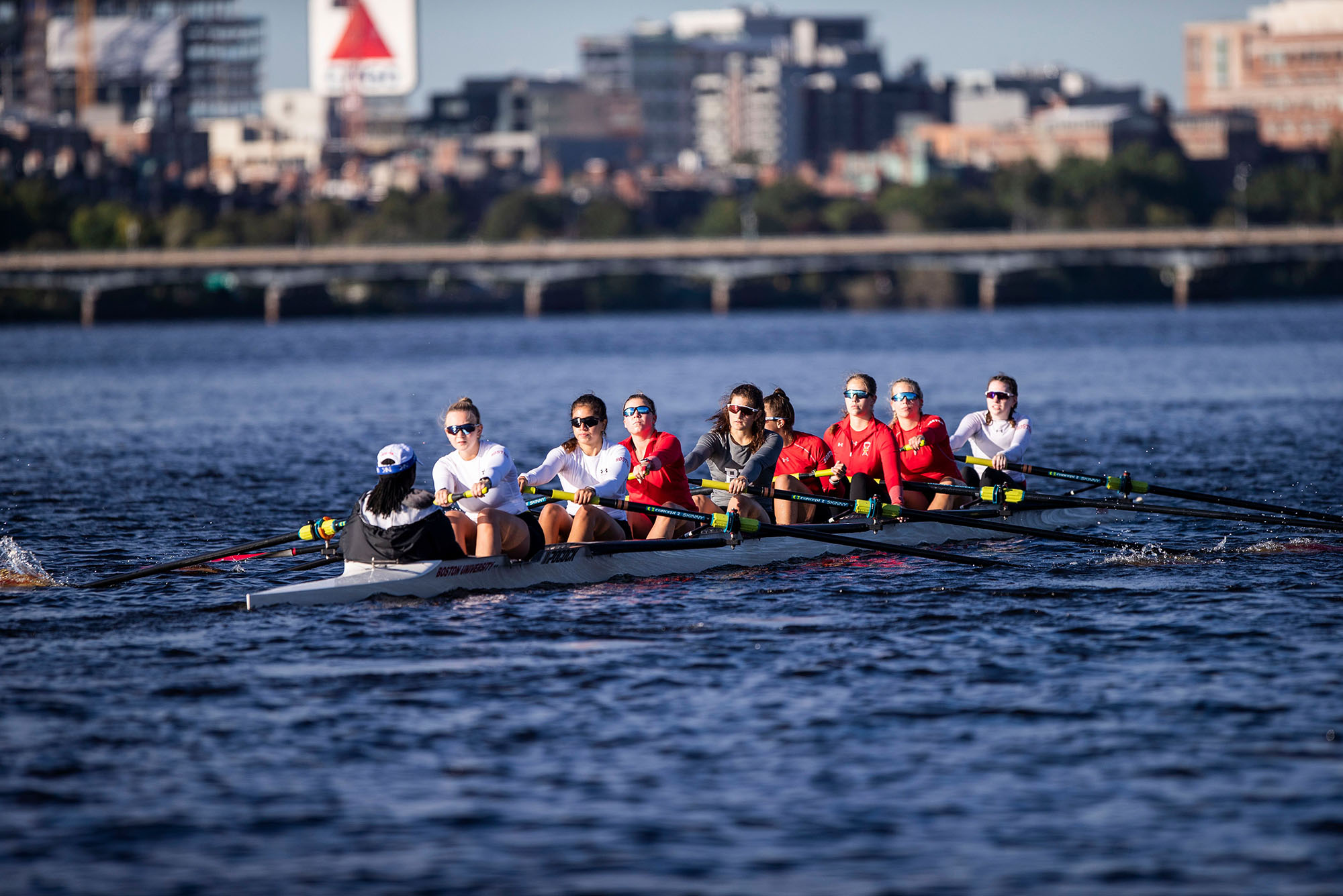 The BU women’s lightweight rowing team’s fall calendar began with a pair of top-15 finishes at the Head of the Housatonic on October 9.

There’s a buzz around Boston University’s DeWolfe Boathouse again. This weekend, 13 BU boats will race in the world-famous Head of the Charles Regatta, marking its return after being canceled last year by the pandemic. The DeWolfe Boathouse is the starting point of the three-mile course, which will welcome rowers from across the globe Friday, Saturday, and Sunday, October 22 to 24.

“It’s a banner event for the rowing world,” says Malcolm Doldron, BU women’s lightweight rowing head coach. “There is a certain energy about it because it’s the largest regatta in the world.”

This year, 65 competitive events are scheduled throughout the weekend, including master, youth, para rowing, and more. College teams always make up a large portion of the field, and this year, Thomas Bohrer, BU men’s rowing head coach, says he expects an especially significant collegiate presence in the top races.

“In years past, they’ve had international teams and club teams mixed in some of the championship events. This year, it’s going to be all colleges,” he says. ”In some sense, it’s going to give us a good idea of how we stack up against other teams.”

The 13 Terrier entries will launch throughout the weekend. Bohrer will row in the Men’s Grand Master Singles as part of a new-for-2021 slate of events on Friday, before BU’s men’s and women’s club and alumni teams compete on Saturday. The men’s, women’s, and women’s lightweight championship boats will race on Sunday, and BU’s final representation that day will be in the Directors Challenge Mixed squad.

With a full fleet of BU boats ready to race, men’s rower Harrison Steck (Questrom’22) says there is a strong sense of anticipation around the regatta. “The team is extremely excited to have the opportunity to compete on the world stage,” he says. “You’re not going to have a larger race than the Head of the Charles.”

Part of that excitement stems from the hundreds of thousands of spectators that turn out for the event.

“Most of our races take place on a Saturday morning before most people are awake. This is a big change from that, so it’s really fun to be a part of,” says Madeline Davis Tully, women’s rowing head coach. “There are tons of people from the greater Boston community and larger that have no association with the sport of rowing, but come to just take in the spectacle of it… This is a big event for Boston, for BU, and for the rowing community, so we want to make sure that we put in a good showing and that we’re prepared to compete.”

Spectators gather all along the course, watching from riverside walking paths or peering down from the seven bridges the boats pass under on their way from the shores of BU to the finish line at Herter Park. There are also designated hospitality areas that are recommended and organized by the HOCR.

The winding route of the Charles presents a unique set of challenges, but BU rowers have an advantage over most of the other competing athletes. “The Charles River is our home course,” Steck says, “so we take that very personally.”

“On a course with a lot of turns,” women’s lightweight rower Kathryn Grabowski (CAS’22) notes, “you can make and lose a lot of time depending on how tight you take the turn. We’ve been able to go over the course multiple times, practice it, and know where we’re going to make our moves.”

It’s been 733 days since the Head of the Charles was last held, and as BU rowing emerges from the pandemic, Doldron says, the regatta “comes at a time when we’re just getting back into the swing of things.”

“For the fall, our real focus is in building our base fitness and rowing technically better,” Davis says. “Our primary racing season is in the spring, but we do train throughout the whole academic year.”

Just five weeks into their preparation for the 2021-2022 season, there is still plenty of room to grow before the busier spring schedule, Bohrer says, but he’s looking forward to seeing his team in a competitive race this weekend.

“The fall has been a lot about developing our younger guys. It’ll be exciting to see how they compete, especially with the changes that we’ve made.”

The 2021 Head of the Charles Regatta is Friday, October 22, through Sunday, October 24. Boats will launch between 8 am and  10:46 am on Friday; 8 am to 3:41 pm on Saturday; and 7:45 am to 3:59 pm on Sunday. Fans can watch live coverage on the Head of the Charles Regatta YouTube channel and follow BU’s teams on Twitter @TerrierMROW, @TerrierWROW, @Terrier130ROW, and @BUGameDay. Find more information at GoTerriers.com, and the complete racing schedule here.

Head of the Charles Regatta Returns This Weekend

Video: Behind the Scenes at BU’s DeWolfe Boathouse

Head of the Charles Regatta Returns This Weekend
0
share this