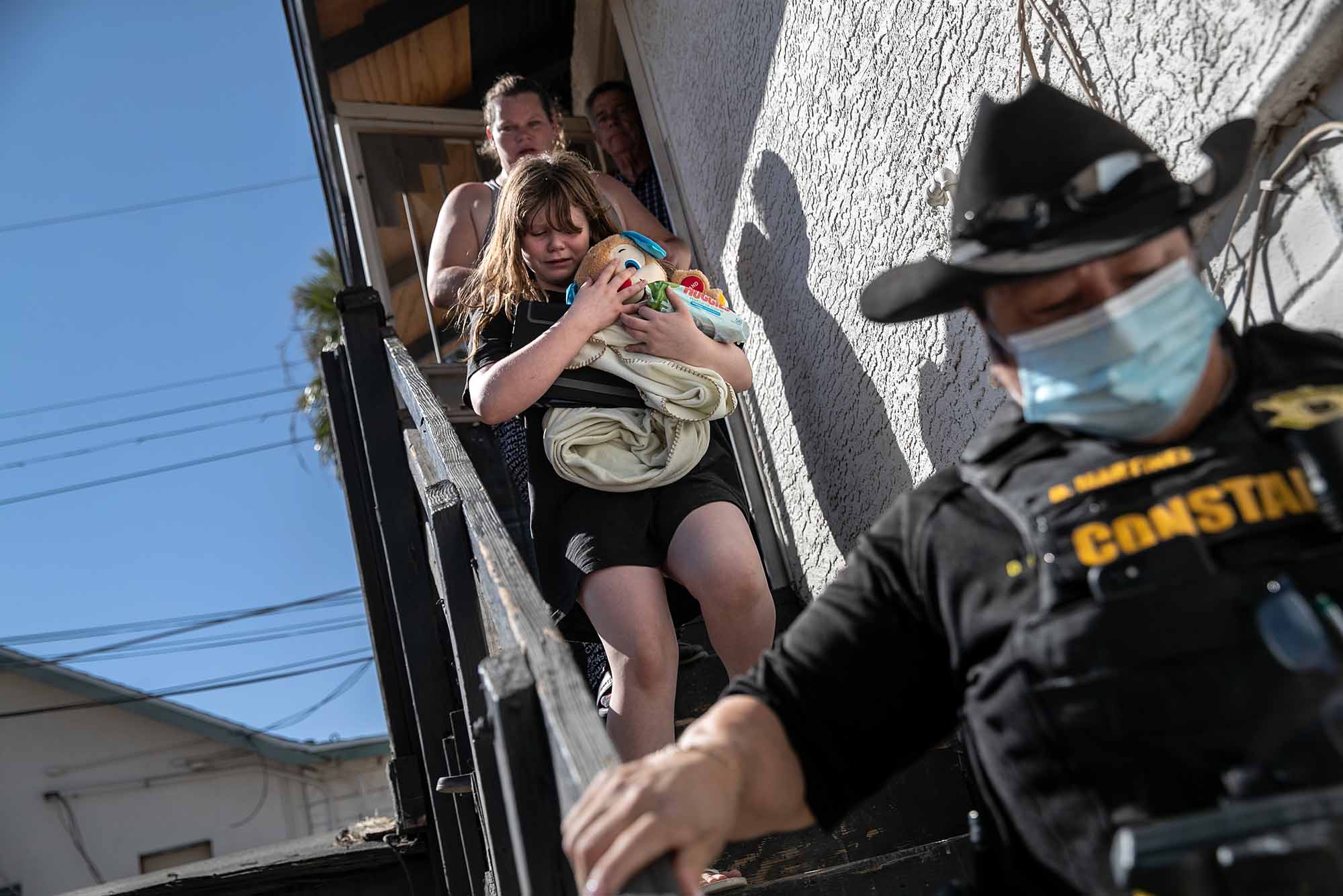 Maricopa County constable Darlene Martinez escorts a family out of their apartment after serving an eviction order for nonpayment in Phoenix, Ariz. Photo by John Moore/Getty Images

“I hope students learn how fulfilling it can be to help give voice to the voiceless.”—LAW Dean Angela Onwuachi-Willig

When it became clear in late August that President Biden’s efforts to extend a nationwide moratorium on residential evictions would fail and hundreds of thousands of tenants would stand at risk of eviction, US Attorney General Merrick Garland asked the legal community for help. Angela Onwuachi-Willig, dean of the BU School of Law, was among those who answered his call for action.

Garland asked law firms and law schools to help fight evictions after the US Supreme Court’s decision to remove protections for tenants that had been put in place early in the pandemic to prevent people from being forced out of their homes during the COVID-related financial crisis.

In a letter to the legal community, Garland wrote that more than six million American households are behind on rent, and three million of those believe they may be evicted in the next two months. But landlords are also impacted. An analysis by Goldman Sachs Group, Inc., found that landlords are owed as much as $17 billion from 3.5 million households behind on rent. Even though Congress has authorized almost $47 billion in rental relief to cover lost payments for landlords, those funds have been slow to be delivered.

LAW is among more than 40 law schools across the country committing students and clinics to the effort to assist tenants, joining Yale, Stanford, Howard, Harvard, Columbia, and others.

A statement from the deans of those schools, including Onwuachi-Willig, says: “As law school deans responsible for training the next generation of lawyers to be stewards of an effective, equitable, and just legal system, we feel obliged to do our part. Drawing on resources such as our pro bono programs, clinical offerings, and the service of our larger law school communities, we will help ensure that families and individuals facing eviction have the legal representation, counseling, and assistance they need to exercise their rights, that those entitled to the support of the Emergency Rental Assistance Program are able to access it, and that eviction proceedings are conducted in a fair and just manner.”

BU Today: Were you surprised at the Supreme Court ruling? Did you agree with it?

Onwuachi-Willig: I was not surprised by the Supreme Court’s decision, but I was disappointed.

In no way do I mean to discount the financial losses to landlords. Their losses are very real, and contrary to popular belief, some landlords are only a paycheck ahead of their renters. But the public health implications of throwing millions of people out on the street during a pandemic, which would only result in more spread, is far more real. The dissent was right. There was not demonstrably clear error that the Centers for Disease Control and Prevention (CDC) lacked the authority to issue its revised moratorium order, which means there was no basis for vacating the district court’s stay.

Furthermore, as the dissent said, the harm from vacating the stay is irreparable—rapidly increasing COVID-19 transmission rates and death.

BU Today: Why is it important for law schools, including BU LAW, to get involved in this eviction moratorium issue?

Onwuachi-Willig: Few things are more disruptive and destructive to a person’s life than eviction. You lose your home, your community, often your belongings, your chance to go to school for a while if you’re a child because you have no stability— basically, you lose all that you have known at once. Eviction affects one’s mental health and well-being even when there is not a global health crisis occurring. Having to endure an eviction in the middle of a pandemic is 10 times more horrific. For some people, it results in a certain death sentence, and for no reason but poverty or the fact that they lost their job or lost their day care.

At BU LAW, part of our stated mission is to prepare our students to serve the public interest. Legal services are out of reach, financially speaking, for many middle-class, working class, and low-income individuals. In fact, approximately 80 percent of people who would qualify for free legal assistance cannot obtain it. It’s important for law schools to play a role in reducing the legal services gap for underserved populations, both directly through our clinical work and indirectly through instilling in our students and graduates a responsibility to serve the most vulnerable people among us with their legal skills and talents.

BU Today: What do you hope LAW students take away from this issue and from the experience of working with people facing eviction?

Onwuachi-Willig: I hope students learn how fulfilling it can be to help others, to help give voice to the voiceless. I hope they see, in studying eviction law, the flaws or gaps in the law that leave far too many people vulnerable to eviction and see how devastating eviction can be for people. I hope they learn, if they do not already know, how prevalent eviction is and see how far too many landlords fail to follow the law in evicting people because they frequently can rely on the fact that tenants often do not know their rights.

BU Today: Is there any fair, and achievable, outcome in this difficult issue that helps both landlords and tenants?

Onwuachi-Willig: Some highlight eviction diversion programs as a solution that would both prevent evictions and allow landlords to collect rent. It’s a pipedream, but I would really love to see a more effective “bailout” of sorts for landlords, much like we have done for banks and other companies in the past. Now that the moratorium is over, some landlords are going to demand months and months of unpaid rent from struggling people. Skyrocketing rents are hard to pay under typical circumstances, particularly when one has a low-wage job or is underpaid or underemployed. Now, tenants are suddenly supposed to have multiple months’ rent? For the sake of the health of our country and its residents, it would be great if we [the US government] forgave any backed-up rental payment and bailed out landlords for their losses.