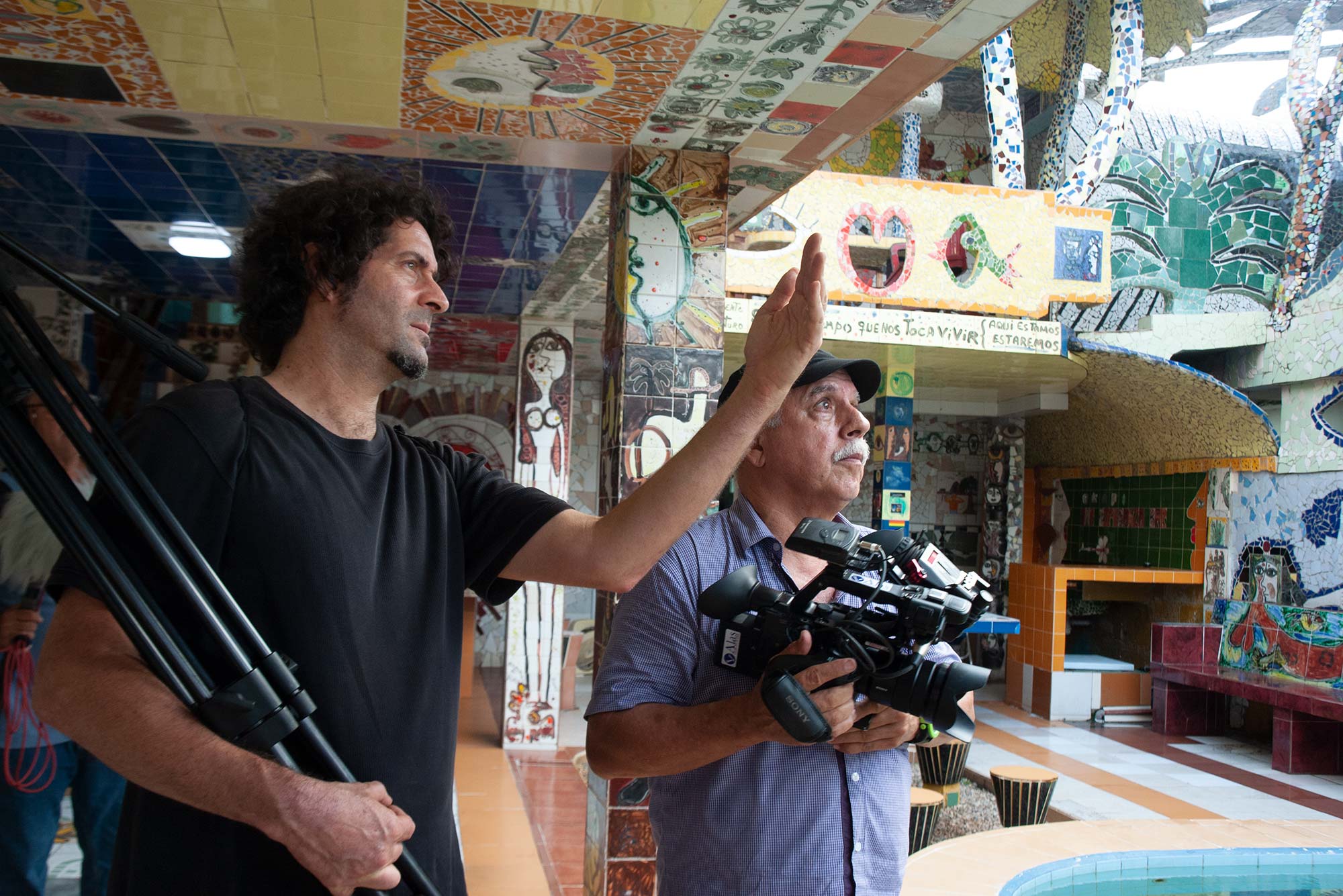 Director Ken Schneider working with director of photography Roberto Chile at the home of Cuban artist Fuster for the film, Los Hermanos/The Brothers, one of the nine films screening at this year’s BLIFF. Photo by Ivan Soca Pascual

For two decades, the annual Boston Latino International Film Festival (BLIFF) has showcased and celebrated the work of Latinx filmmakers and stories that break stereotypes, celebrate community and culture, and offer nuanced looks into issues affecting the Latinx community in the United States, Latin America, and Spain. The festival features shorts, documentaries, narrative films, and more.

This year’s festival, which kicks off September 24 and runs through October 3, will feature nine feature-length films and a single block of shorts directed by filmmakers from Brazil, Cuba, Puerto Rico, the United States, and more. Like last year’s festival, this year’s will be virtual.

BU Today recently sat down with Sabrina Aviles (COM’83), BLIFF director since 2016, to talk about this year’s festival, her love of movies, and what she hopes audiences take away from this year’s roster of films.

BU Today: How did you first become interested in film?

Sabrina Aviles: I discovered old movies in high school and I became kind of an old movie buff. I would watch movies late into the night. Even today, I probably know more than the average person about anything film-related prior to the 1960s, like all the movies and Academy Award winners and actors and studios. I wanted to be an actor, and maybe be a director someday.

At BU, I majored in broadcasting and absolutely fell in love with it. I was surrounded by people who were like these mini Steven Spielbergs. One of my work-study jobs my senior year was working in a place at COM called the film unit, which is basically where all the film students rent their equipment. I was the only female working in this department and I got to know all the film students and made some rich connections, including Steven McCarthy, who is one of the top directors of photography in the United States. We were classmates.

Five or six months after I graduated, I landed my first job out of college, at WGBH. It had nothing to do with film, it was in a department called Caption Center, which was when they were just developing closed-captioning. So, that was how I got my foot in the door.

Sabrina Aviles: Since then, I have directed films and continue to direct; however, my journey has been mostly in producing and more so in something called creative producing, which is basically where you don’t only take care of the logistics surrounding your production, but you are in dialogue with your director to complement or add to his or her vision of what the final product is going to look like. So, it is these creative conversations that you have with your director that as a producer you try to either enhance or resolve.

BU Today: The Boston Latino International Film Festival is celebrating its 20th anniversary. Can you talk a little about its history and how you became involved?

Sabrina Aviles: I became involved with the Latino Art Center, which is now called the Villa Victoria Center for the Arts, when it opened in 2001. I had met Jose Augusto Aviles, then the director of the film festival, in a meeting and congratulated him on having the wherewithal to start BLIFF. Later, when I was the director of this center, he actually approached me and asked, “Could we use your center as one of our venues?” And I said, “Yeah, of course.” I loved the idea, especially because of my background in film. And so we showed films there for a couple of years.

Then, after I left the center in 2005, he asked me if I could come on the BLIFF board. It was interesting, just sort of helping him with the logistics of the film festival. I worked there—but it was volunteer work—for about three years. My title was associate director, which was more like an operations person. And then I left.

Jose always wanted me to come back and I just couldn’t take it on. And one year, he basically approached me and said, “You know, I think this is my last year. I need to take a break from it, it’s time for somebody else to take it over.” He felt that with my arts administration background, and the fact that I was a working filmmaker and kind of knew the landscape, that I would be a perfect fit. I knew I wasn’t going to get paid, but I thought, well, you know, I will take it on and see where I can take it, because I believe in the mission. I had enough contacts in the industry that could help me grow it, and that’s what happened. That was five years ago.

BU Today: What does the process for selecting films for the festival look like?

Sabrina Aviles: In previous years, we usually had a call for entry, where we invited people to submit their films. And then we’d have maybe 10 to 12 reviewers who would review the film, and then narrow down the list to the best possibilities. And then we’d have a core programming team. I’m included in that, and that’s where we look at the films and vote for the finalists.

But this year, we decided that we would approach filmmakers. We did our research on what’s out there, what’s getting the buzz, you know, and we approached the filmmakers and asked,
“Would you be interested in showing me your film or sending us a screener?”

Because of the lack of live, in-person screening, especially last year, films often went straight to streaming services. And in the film festival community, we were and still continue to be challenged by that, because we have just a small window for showing a film.

BU Today: Are there any particular films that stand out to you in this year’s festival?

Sabrina Aviles: There’s a little bit of something for everyone. I think the Rita Moreno documentary [Mariem Pérez Riera’s Rita Moreno: Just a Girl Who Decided to Go for It] is wonderful. It’s inspiring, really entertaining, and it’s beautifully shot. There are a couple of films that have elements of magic realism, which is almost always really lovely. There’s a film  regarding abortion rights in Texas, which is incredibly timely, even though it was made a couple years ago. There’s one on what happens to those undocumented immigrants who were never able to cross the border. There’s this wonderful narrative film about this young Latina woman finding her voice among and in her community, and as a professional. She’s Latina, but the story is so universal that it can appeal to anyone.

One of my favorites, because I always love films about art and music, is Los Hermanos/The Brothers. The story is primarily about the relationship of these two brothers—llmar Gavilán and Aldo López-Gavilán—who are Cuban musicians, one who’s made his life here in the United States, the other in Cuba, and how they came together when we resumed diplomatic relations with Cuba during the Obama era, and how then that sort of fell through when Trump took over. But it’s not a political film. And yet, the context is very political. But it’s just such a joyous film about family, about love, about music, about art, about eating. I love films like that and usually program one or two films like that with each festival, because I like to show that despite the challenges that we have as a community, we’re also about family, and art, and eating, and music, and celebration.

BU Today: Hollywood has a history of telling white stories and featuring white actors. What are your thoughts on the industry’s recent attempts to become more inclusive and diverse?

Sabrina Aviles: Locally, I think we’re in a major and wonderful moment for the Boston International Latino Film Festival, because now it’s come to light that Latinos are not a monolith. So, I need to take advantage of that with a festival within the context of this sort of ever-changing question of, “What does this mean for us in the future?” Susan Jensen, at the Boston Asian American Film Festival, Lisa Simmons, at the Roxbury International Film Festival, and I do a series called Share Stories, where we have conversations about things that are happening at the time [in our communities]. We realized that now’s the time for us to sort of take advantage of this woke moment, if you will, to really educate audiences about who we are and that there’s such a variety and different voices within these three specific film festivals.

BU Today: What do you hope the audiences take away from this year’s film festival?

Sabrina Aviles: I want to encourage kids to pursue this as a viable career. Because again, representation doesn’t only matter in front of the camera. With film, the more you populate the industry with diverse voices, the more it replicates itself. As a filmmaker now, I’m working on a film and I made sure that the film is about a Latino community. And I made sure that at least two or three of the people that are working with me are Latinx, and it’s working beautifully.

The Boston Latino International Film Festival (BLIFF) begins Friday, September 24, and runs through October 3. The entire festival is virtual, and tickets are $10 per film. Tickets are available within the first 48 hours of the film’s release time. Once you purchase a ticket within that time frame, you have 24 hours to access the screening. Find more information, including this year’s festival lineup, here.

There is 1 comment on Boston’s Latino International Film Festival, Kicking Off Today, Helmed by BU Alum