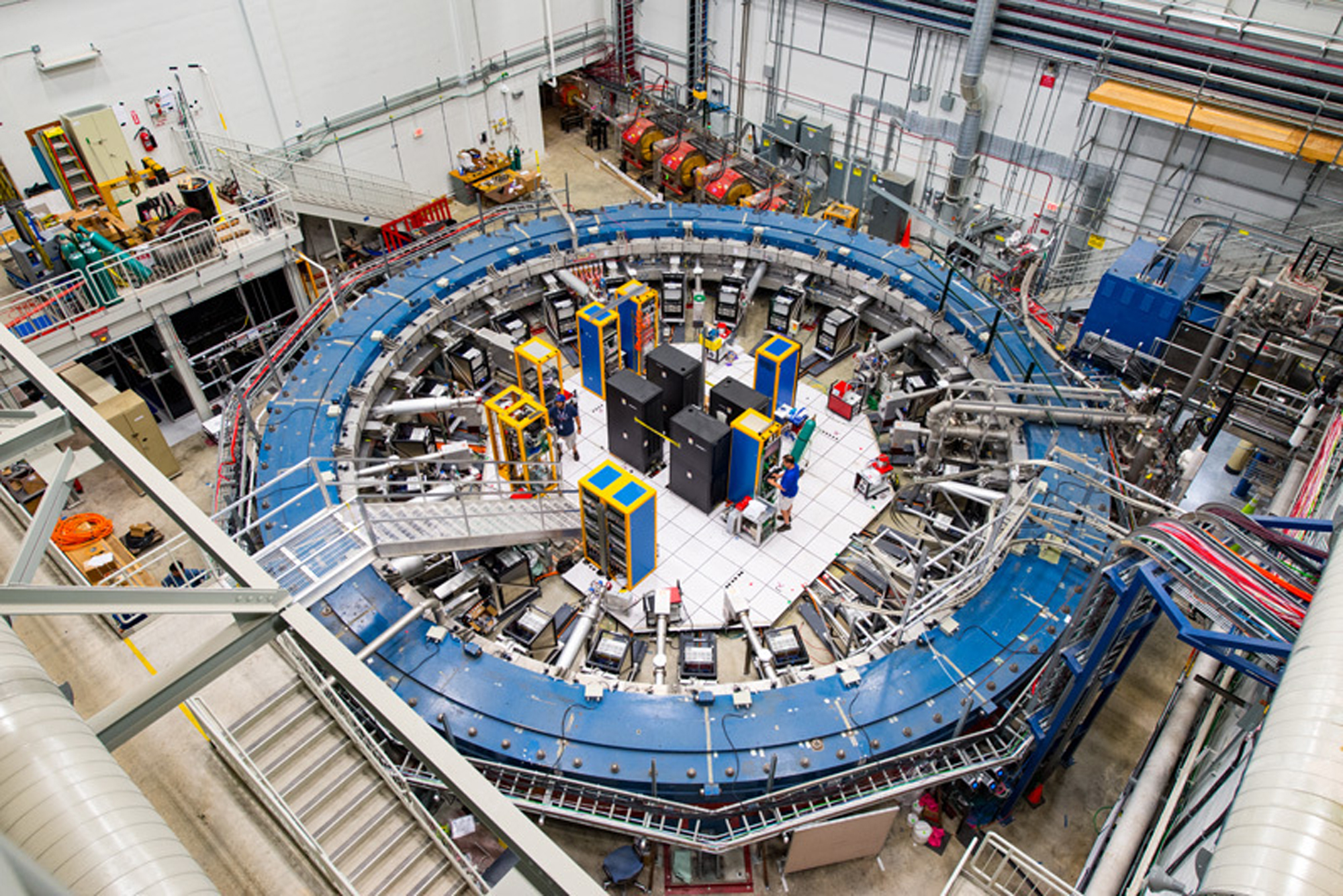 This donut-shaped ring is a racetrack for particles called muons. It operates at negative 450 degrees Fahrenheit, and physicists use the machine to study muons as they travel through a magnetic field. Photo credit: Reidar Hahn / Courtesy of Fermilab

There are still-undiscovered particles or unknown forces swirling all around us, suggest new results from a massive experiment conducted at the US Department of Energy’s Fermi National Accelerator Laboratory (Fermilab) in Illinois. The findings were analyzed with the help of more than 200 scientists from 35 institutions in seven countries, including physicists from Boston University.

The experiment’s results appear to indicate the presence of something mysterious beyond the current reaches of science. It’s a breakthrough moment for physics, a field that has spent decades developing increasingly sensitive detectors and technologies to investigate the unseen particles and forces that make up our material world and beings.

“Over the last 50 years, our understanding of the subatomic world has become really amazing,” says BU physicist Lee Roberts, cofounder of the experiment and a coauthor on the analysis of the Fermilab results. “We’ve managed since the 1970s to put a lot of things together, theoretically, that explain magnetic interactions and forces that govern our physical world—but there are a number of questions we still don’t understand.”

This new finding, he says, “reveals that there must be something else beyond what we currently know.”

The Fermilab experiment, called Muon g-2, detected particles called muons behaving slightly differently than currently accepted physics theories—known altogether as the Standard Model of physics—would predict. That slight deviation indicates that other particles or forces not accounted for by the Standard Model are influencing the muon particles. But what? Those mysterious forces could perhaps be from undiscovered types of particles that are changing the muon’s magnetic strength.

Muons are a good candidate for helping physicists study the subatomic world because they can be easily detected and measured using today’s technological capabilities. They are naturally created when cosmic rays traveling from the sun, other planets, and the universe beyond our solar system reach and interact with Earth’s atmosphere. These particles are about 200 times heavier than electrons.

“Muons are heavier siblings to the electron, and they have an electric charge,” says Roberts, a BU College of Arts & Sciences professor of physics. Like electrons, muons spin. “Because they have an electric charge and are spinning around, they generate a magnetic field—they act like tiny spinning magnets.” That spin is key to scientists’ being able to detect their behavior and what other particles and forces are influencing muons.

Particles approaching the speed of light

At Fermilab, a huge donut-shaped machine—embedded with electronics and circuitry custom-built by Roberts and other BU physicists—uses strong magnetic fields to trap the muons in a magnetic racetrack as the particles travel around at incredibly high speeds, almost at the speed of light. Inside the machine, protons are smashed into a metal target, mimicking the collision that happens when cosmic rays hit Earth’s atmosphere. The result? Millions of muons are produced every second.

As those muons spin around the donut-shaped racetrack, they wobble as if on an internal axis, like a top or gyroscope. The strength of the muons’ magnetic field, which physicists call the “g-factor,” determines how much it wobbles. The g-factor is influenced by the muon’s interactions with the sea of subatomic particles that naturally exist all around it—a constantly changing “foam” of short-lived particles. Inside the donut at Fermilab, high-precision detectors allow physicists to measure the muon g-factor, which is what led them to discover that there must be a new type of particle or force swirling around the muons in the foam, changing their g-factor from what the Standard Model of physics would expect.

In its first year of operation, in 2018, the Fermilab experiment collected more data than all prior muon g-factor experiments combined. The Fermilab experimental results are especially exciting because they confirm similar findings that were made at Brookhaven National Laboratory (BNL) in 2001. “In 2001, when it looked like we were seeing evidence of new physics at Brookhaven, it was in newspapers all around the world. There was so much interest in the findings,” Roberts says.

Breakthroughs of this magnitude, much like the construction of the gigantic machines that make them possible, take time. The Large Hadron Collider at CERN in Geneva, Switzerland, had been searching for signs of new particles or forces since it started operating in 2008. In 2012, CERN made history when it detected the Higgs boson (nicknamed the “God particle”) for the first time.

Now, the United States is having its own aha moment.

“The Fermilab result agrees with the BNL result,” Roberts says. Combined, the BNL and Fermilab experiments indicate that the chance of the results being a statistical fluctuation is about 1 in 40,000. That means it’s statistically very likely that undiscovered particles or forces are jostling the spinning muons, influencing their magnetic strength and the amount of wobble they show. When the BNL result was the only one of its kind, doubt still lingered. Now, it’s been reproduced at Fermilab with even more precise measurements.

“Today is an extraordinary day, long awaited not only by us but by the whole international physics community,” Graziano Venanzoni said in a Fermilab press release. Venanzoni is co-spokesperson of the Muon g-2 experiment and a physicist at the National Institute for Nuclear Physics in Italy. “A large amount of credit goes to our young researchers who, with their talent, ideas and enthusiasm, have allowed us to achieve this incredible result.”

Long Island Sound to the Mississippi River to Fermilab

To do the Fermilab experiment, the donut-shaped machine first had to get there from BNL. In 2013, it traveled by boat from BNL’s Long Island location, around the Florida peninsula, and up the Mississippi River, where it finally joined up with Illinois’ waterways. Then, a series of interstate highway shutdowns allowed an oversized truck to slowly transport the machine to the Fermilab location.

At Fermilab, electronics and circuitry developed at BU’s Electronics Design Facility (EDF) and Scientific Instrument Facility were an integral part of the experiment.

“BU’s Electronics Design Facility can build custom equipment when we need it—and we needed a special controller for the system that keeps the beam of muons stored in the racetrack,” Roberts says. Another set of custom electronics from BU, developed by BU Adjunct Professor of Physics James Mott and the EDF team, sits inside the machine’s donut-shaped storage ring, measuring the signals that the muons give off as they speed around the vacuum-sealed ring.

For the Brookhaven experiment, Roberts says, BU performed about $600,000 of machining to create custom parts and electronics. Those contributions then made their way to Fermilab onboard the racetrack, and the BU team also helped modify the machine’s vacuum chambers to set up the new experiment at Fermilab. In addition to Roberts and Mott, other members of the BU team included CAS Professors of Physics Robert Carey and James Miller, postdoctoral research associates Nam Tran and Andy Edmonds, and graduate student Nick Kinnaird.

“Physics is interested in understanding the fundamental, underlying laws of nature, the forces and interactions between matter,” Roberts says. “It explains atoms, chemistry, how solids or condensed matter works. Understanding physics allows us to develop new materials and new devices, and the exploration of physics requires us to advance our technological capabilities. To make these measurements, we’re designing new technologies, and we require computers with increasingly enormous amounts of computational power.”

Detectors developed by physicists, for example, are now used to perform MRI and PET scanning, types of medical scans that allows clinicians to see inside the human body.

Data analysis on the second and third runs of the experiment is underway. The fourth run is ongoing, and a fifth run is planned. Combining the results from all five runs at Fermilab will give scientists an even more precise measurement of the muon’s wobble, revealing with greater certainty whether new physics is hiding within the particle foam that swirls around muons.

Fermilab scientist Chris Polly, who was a lead graduate student on the Brookhaven experiment in 2001, says the latest breakthrough makes all the patience and time that was necessary worthwhile.

“After the 20 years that have passed since the Brookhaven experiment ended, it is so gratifying to finally be resolving this mystery,” Polly says.

A Physics Breakthrough: More Evidence of New Particles or Forces
0
share this