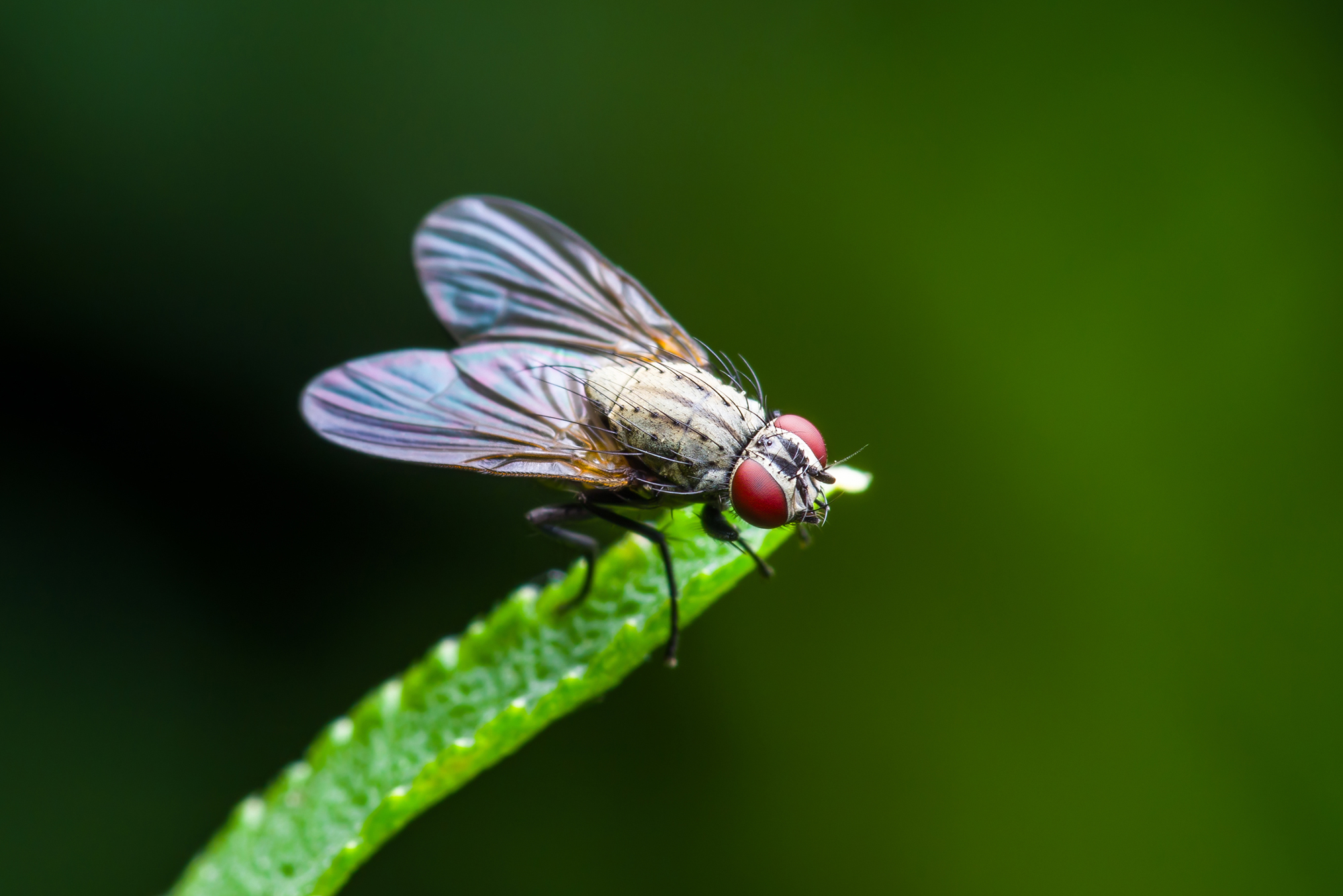 BU biologist is studying the insect’s genes to take down cancer, Alzheimer’s, asthma, and other diseases

“Doing work on flies can be very informative to understanding how cells work or give insights into human disease,” says BU researcher Kim McCall. Photo by Nechaev-Kon/Getty Images

They’re the bane of summer picnics, the nemesis of busy kitchens. For most of us, flies are a seasonal annoyance, buzzing pests to be shooed, sprayed, or swatted. But to scientists, the insects are the ideal test subjects for studying a range of human diseases. What’s happening at the molecular level in their tiny bodies as they grow, age, and get sick closely mirrors what happens in ours—about 70 percent of human disease genes can also be found in flies. But they’re much less complex creatures, making it easier for researchers like Kim McCall to uncover valuable new insights into a host of chronic diseases.

McCall’s lab at Boston University is full of fruit flies. Tens of thousands of them, known as Drosophila melanogaster, are stored carefully in vials in a temperature-controlled room. McCall, a BU College of Arts & Sciences professor and chair of biology, studies Drosophila to better understand the molecular mechanisms that cause programmed cell death, particularly in the ovaries and brain. Cell death is a vital part of life in all animals, including flies and humans. It’s what enabled your body to develop in the womb—old cells making way for new ones—and what gives you a fighting chance against viruses as your body takes down infected cells. But it doesn’t always go according to plan.

How the body disposes of dead cells is critical too. Every day, billions of your cells die. That’s a lot of trash hanging around. Fortunately, the human body has a team of custodians called phagocytes, cells that wipe out dead cells and harmful bacteria. Or, at least they should. Sometimes they don’t sweep up everything: asthma and Crohn’s disease, for example, are associated with defective cell clearance; glia—the brain’s phagocytic cells—may play a role in Alzheimer’s disease.

To study cell death and clearance in the fly, McCall looks at its cells through powerful confocal microscopes, which give a high-resolution view of what’s happening inside each cell during its demise and disposal. Once she’s established what should happen, she then disrupts the process using a technique called RNA interference. This allows her to stop certain genes transmitting instructions to a cell, turning them off or silencing them to see what changes. By repeatedly knocking down different genes, McCall can build a picture of how cell death and clearance works and why it might sometimes go awry.

In a recent study, she looked into the death of nurse cells in the ovary. Nurse cells help the oocyte—the precursor to the egg—develop. When this process, called oogenesis, finishes, the nurse cell dies. It used to be assumed the cell killed itself—most cell deaths are thought to be self-inflicted.

As the flies aged, they underwent neurodegeneration—kind of like fly Alzheimer’s disease—and started to get holes in their brain. Now, we’re trying to understand the link between the dead neurons and the neurodegeneration.

“We found the surrounding cells are the ones driving the death,” says McCall. The outside of those cells are acidic and that allows them to kill their neighbors. “It points to the diversity of cell death mechanisms that occur in all organisms. And understanding the diverse ways cells can die is important for understanding the body.”

She’s also examining flies with a mutation that prevents them from clearing dead cells from their brains during development. Neurons keep dying, but the glia—the brain’s trash eaters—didn’t function properly, preventing phagocytosis, or cell clearance.

“That’s not normal. The cells should be cleared away,” says McCall, whose research is largely funded by the National Institutes of Health, but has also been supported by the March of Dimes and the American Cancer Society. “And what we found is as the flies aged, they underwent neurodegeneration—kind of like fly Alzheimer’s disease—and started to get holes in their brain. Now, we’re trying to understand the link between the dead neurons and the neurodegeneration.”

McCall has published more than a dozen papers on cell death and clearance in the past five years alone—many with her graduate students. She typically has about 12 to 15 people working in her lab, including undergraduates.

“Undergrads are fully involved with all the techniques in the lab,” she says. “They’ll do the genetic crosses and then they’ll do the dissections, the staining, and the confocal microscopy.”

Many of her former students have gone on to medical or dental school or found work in labs.

“For my students who go on to dental school, I always tell them to mention in their interviews that they have amazing fine motor skills, because they can dissect the ovaries out of a fly,” McCall says.

In an era when basic science has become a target of presidential budget cuts, she touts the value of what she does, called model organism research, not only to her students, but also to society.

“Doing work on flies can be very informative to understanding how cells work or give insights into human disease,” says McCall. “And it’s much cheaper than doing similar work on mice—and faster, as well. With less money, we can get a lot of information about how genes function.”